Kamala Harris makes history with official nomination for US VP

Senator Kamala Harris has scripted history as she became the first Indian-American and also the first Black woman to accept the nomination for vice-president from a major political party in the US. 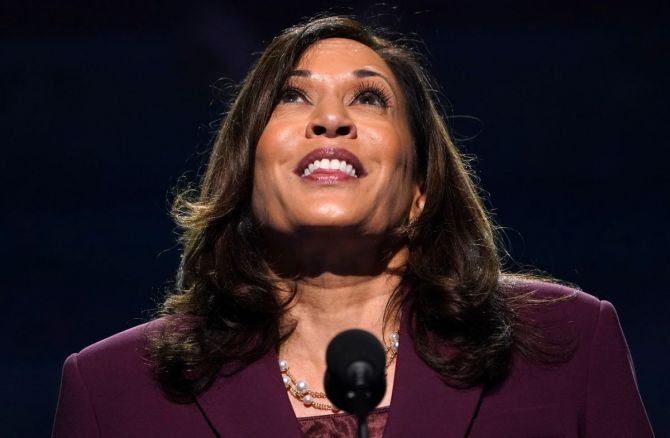 Harris, 55, was nominated as the vice-presidential candidate on Wednesday at the virtual Democratic National Convention where she attacked President Donald Trump's for "failure of leadership" and blamed the Republican leader for the "lives and livelihoods" of the American people amidst the coronavirus pandemic.

"I accept your nomination for vice president of the United States of America," she said while accepting the Democratic Party's nomination to be the running mate of the presidential candidate Joe Biden.

In her acceptance speech, Harris paid tribute to the Black women that came before her and she vowed to fight for the nation.

She profoundly remembered her mother from Tamil Nadu.

Harris said her mother raised her and her sister "to be proud, strong Black women. And she raised us to know and be proud of our Indian heritage. She taught us to put family first" the family you're born into and the family you choose.

In reference to her Indian heritage, Harris used a Tamil expression in speaking of "my uncles, my aunts, my chitthis".

Harris said she was there standing on her mother's shoulders, a woman who "came here from India at age 19 to pursue her dream of curing cancer. At the University of California, Berkeley, she met my father, Donald Harris, who had come from Jamaica to study economics". 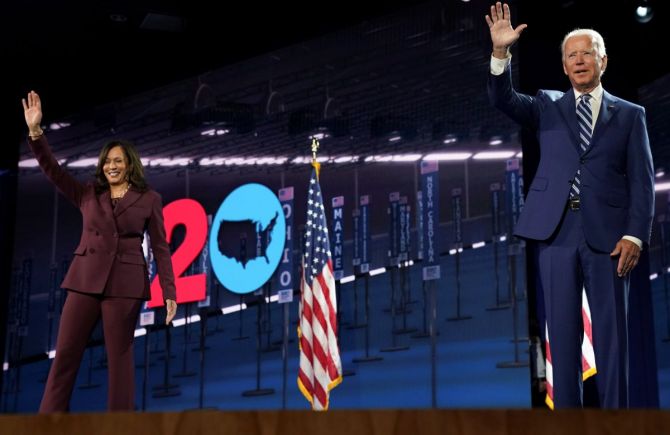 She assailed Trump's "failure of leadership".

She said the Republican leader "turns our tragedies into political weapons".

Former US vice president Joe Biden and Harris will challenge Trump and his Vice-President Mike Pence in the November 3 election.

"We must elect Joe Biden. I knew Joe as vice president. I knew Joe on the campaign trail. But I first got to know Joe as the father of my friend," she said.

"And here's the thing: We can do better and deserve so much more," she said. 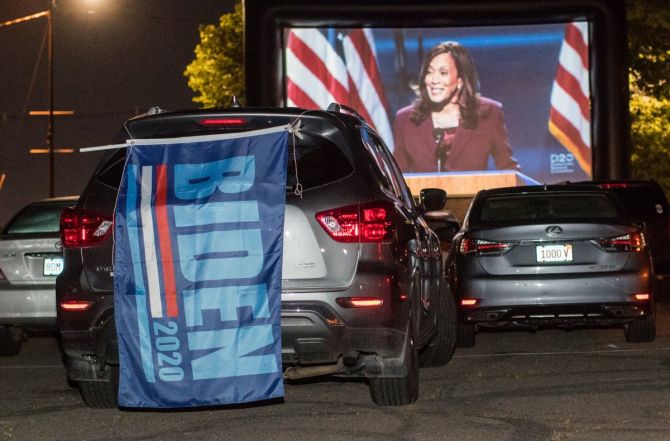 IMAGE: A Biden 2020 campaign flag is draped on the back of an SUV while a screen projects Democratic Vice Presidential nominee US Senator Kamala Harris during a drive-in watch party for the virtual Democratic National Convention hosted by the Massachusetts Democrats at Suffolk Downs in Boston, Massachusetts. Photograph: Scott Eisen/Getty Images

Biden and his wife Jill joined Harris and her husband Douglas Emhoff on stage while maintaining social distancing in view of the COVID-19 pandemic that forced the Democrats to hold the four-day convention virtually.

Harris is the first Indian-American to be selected for the second-highest elected office of the United States after that of the president.

She is also the first-ever Black and first-ever African American to be nominated as a vice-presidential candidate by a major political party.

If elected in the November 3 presidential elections, Harris, whose mother is from India and father from Jamaica, would be the first-ever women vice president of the United States.

Harris has had a stellar career beginning as a public prosecutor in California. 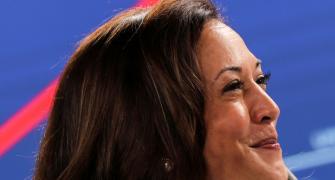 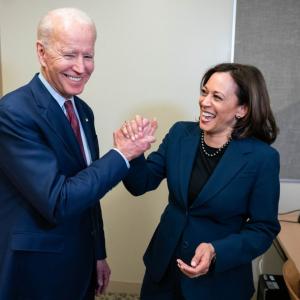