Congress leader Kamal Nath was on Monday sworn in as Madhya Pradesh chief minister at a ceremony attended by a galaxy of leaders. 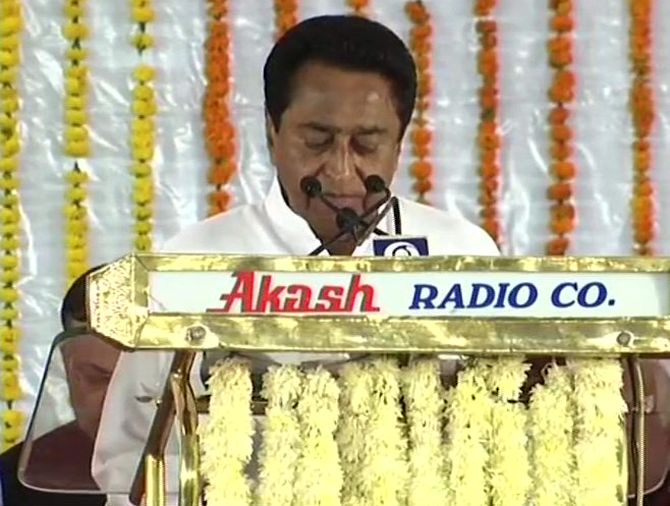 Governor Anandiben Patel administered the oath of office to 72-year-old Nath, who led the Congress to victory in the recently-concluded state assembly polls.

No other minister took oath along with him.

The Congress on Thursday had named Nath, the nine-time Lok Sabha member from Chhindwara, to head the state Congress Legislature Party, after hours of hectic parleys held by party chief Rahul Gandhi with senior party leaders.

On his arrival at the venue, Gandhi was greeted with loud cheers by the crowd. He was flanked by Nath and state Congress' campaign committee chairman Jyotiraditya Scindia.

Bahujan Samaj Party supremo Mayawati and Samajwadi Party chief Akhilesh Yadav, who have extended support to the Congress to form the government in the state, were not present.

Before the ceremony, an all-religion prayer meet was also organised. 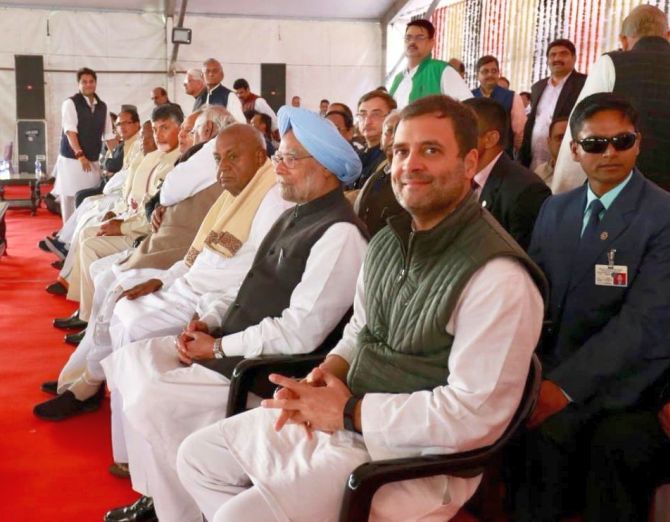 Born at Kanpur in Uttar Pradesh to businessman father Mahendra Nath and mother Leela, Nath is an alumnus of the prestigious Doon School (at Dehradun in Uttarakhand).

He did his graduation from St Xavier's College, Kolkata, before taking a plunge into politics.

Nath was named the Congress chief in Madhya Pradesh in April ahead of the assembly polls.

Many in the party recalled that former prime minister Indira Gandhi described him as her "third son", who helped her take on the Morarji Desai-led regime in 1979.

Thirty-nine years later, the senior-most member in the 16th Lok Sabha donned the battle gear to help Rahul Gandhi make huge gains for the opposition in MP where Shivraj Singh Chouhan is the longest-serving chief minister since 2003.

Along with Scindia, Nath was tasked with reviving the fortunes of the opposition Congress in Madhya Pradesh.

During the course of campaigning, the BJP attacked Nath after an audio-video clip went viral in which he was heard asking clerics to ensure 90 per cent voting in the state's Muslim-dominated areas to ensure a Congress victory.

Under Nath's leadership, the state Congress focused its campaign on "unfulfilled" promises of Chouhan, whom the party dubbed as "ghoshnaveer" (a man of hollow promises), a term that sparked street debates over the fate of schemes announced by Chouhan.

The Congress' tally in the outgoing House was only 58 while the BJP had 165 lawmakers.

The BJP has 109 members in the new assembly.