The faculty and students of Jawaharlal Nehru University alleged that over 10 students, including the visually and physically challenged, were injured due to the "brutality" of police personnel who severely baton charged them during their protest against the hostel fee hike on Monday, even as the Delhi Police denied the accusations. 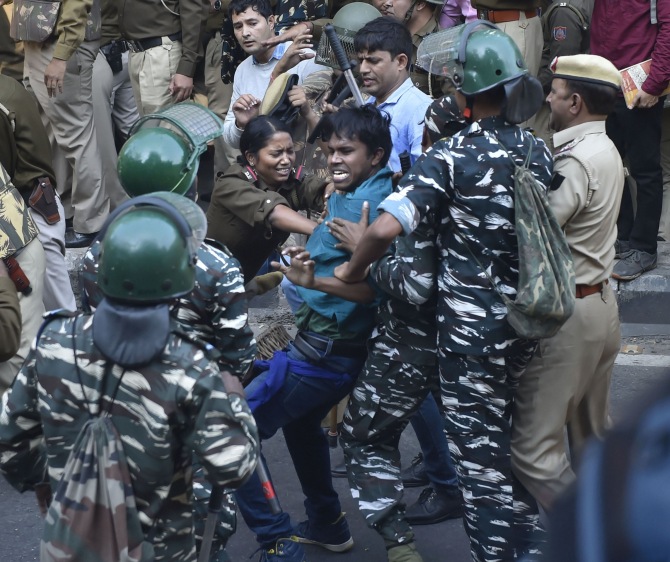 JNU students took out a march from the University premises to Parliament House but were stopped at Baba Gang Nath Marg near the campus from where nearly 100 protestors, including students' union president Aishe Ghosh, were detained.

Ghosh alleged that there was no woman police official while she was being detained.

"I was picked up by four male policemen and put in a bus. When I questioned them about the absence of women police personnel, they were rude to me," she said.

Former students' union president N Sai Balaji claimed that students who were taken inside buses for detention were thrashed by the police personnel. 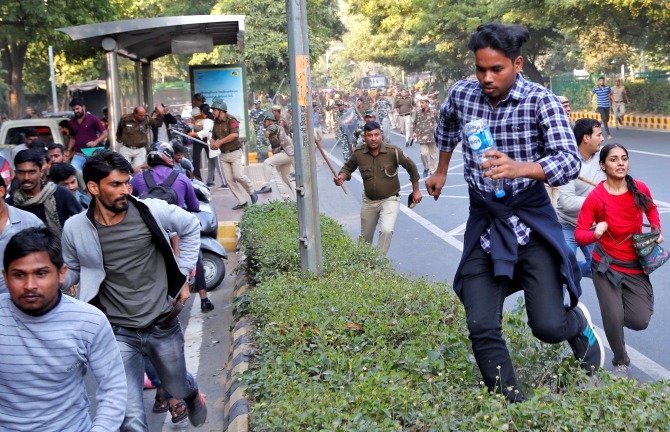 IMAGE: Police wield their batons against students of Jawaharlal Nehru University during a protest against a proposed fee hike in New Delhi. Photograph: Danish Siddiqui/Reuters

A former student, Sandeep Louis, was among those injured.

"He was trying to climb the barricade when police thrashed him. He was bleeding from the head but was led by police to a van so that he could be detained," said Abhishek, his friend.

"He is visually challenged. Police beat him up brutally. Police personnel stepped on his chest. He underwent an ultrasound and is at the AIIMS Trauma Centre," said a fellow student.

Other physically challenged students were also brutally beaten up, he alleged.

"The visually challenged were running here and there, trying to escape the police assault. Protestors were sitting peacefully at Jor Bagh but were lathicharged by police as they tried to disperse the students," claimed another student. 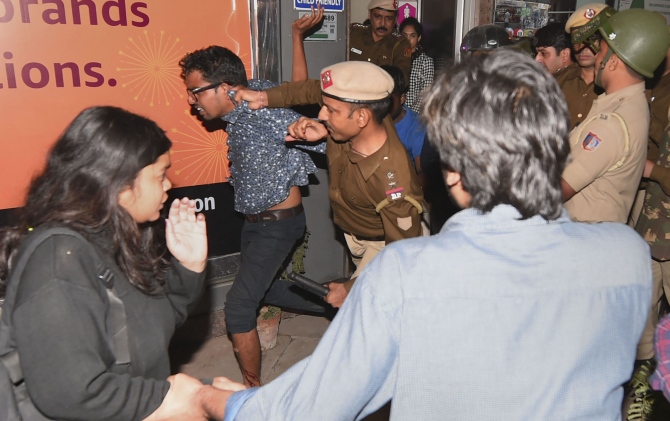 Police chased students for a kilometre till the INA metro station, he said.

"Even teachers who had come to Jor Bagh to meet the injured students were lathicharged along with students," he alleged.

A photographer with a news portal was also injured during the baton charge outside Safdarjung Tomb when students reached there around 4 pm.

Police, however, denied using force of any kind against the protesters.

"The police inflicted severe violence on students on several occasions, outside JNU and then at Jor Bagh, which seriously injured many of them. Physically and visually disabled students were also not spared," JNUTA said in a statement.

At Jor Bagh, even teachers who had gone as part of a JNUTA effort to ensure that peace was maintained were assaulted by the police with full knowledge of their status as teachers, the statement claimed.

"Hundreds of students were also arrested today and taken to several different police stations scattered across the city, and despite efforts of groups of teachers who visited them there were delays in providing them medical treatment, " the faculty members said.

The JNUTA demanded that the VC step down and said it will be organising a protest on Tuesday against the police brutality.