Jammu-Kashmir reopens to tourists after 2 months

The Jammu and Kashmir administration has withdrawn the security advisory that it had issued in August this year for tourists to curtail their stay in the Valley and has offered necessary support and assistance to tourists visiting the state. 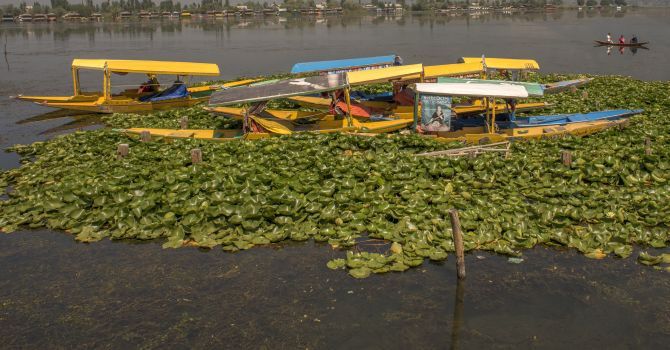 IMAGE: Vacant tourist Shikara boats are moored in middle of Dal lake during curfew like restrictions in Srinagar. The decision to welcome tourists, has been welcomed by all in the area. Photograph: Yawar Nazir/Getty Images

"The security advisory requesting tourists visiting Jammu and Kashmir to curtail their stay in the Kashmir valley issued vide government order No.881-Home of 2019 dated 02.08.2019, is hereby withdrawn. The tourists desirous of undertaking visit to the state shall be provided with all necessary assistance and logistical support," read the order by the state administration.

The UTs will come into being on October 31.

It was on August 2, that the state administration had advised Amarnath Yatris and tourists to curtail their stay in the Valley "immediately", after the Indian Army said Pakistani terrorists are planning to disrupt the pilgrimage.

However, on October 7, Governor Satya Pal Malik had directed officials to lift the Home Department's advisory and had announced that the advisory will be lifted with effect from October 10.

Following the announcement, tourism sector stakeholders have welcomed the state administration's decision to lift security advisory issued for tourists and had expressed hope that they will see a boom in the sector during the upcoming tourist season.