Jagmeet Singh, a 38-year-old Sikh criminal lawyer, was on Monday elected the leader of Canada’s New Democratic Party, becoming the first non-white politician to head a major party in the country.

Singh, the Ontario provincial lawmaker, was elected on the first ballot to lead the party into the 2019 election against Prime Minister Justin Trudeau’s Liberals. IMAGE: Jagmeet Singh, the Ontario provincial lawmaker, was elected on the first ballot to lead the party into the 2019 election against Prime Minister Justin Trudeau’s Liberals. Photograph: Mark Blinch/Reuters

He won the decisive first-ballot victory over three other candidates by receiving 53.6 per cent of the vote.

“Thank you, New Democrats. The run for prime minister begins now,” he tweeted after the election.

“That’s why today, I’m officially launching my campaign to be the next prime minister of Canada,” he added. 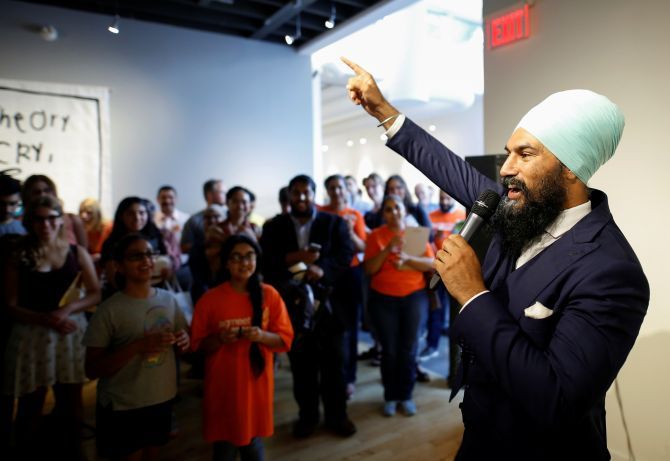 IMAGE: Singh won the decisive first-ballot victory over three other candidates by receiving 53.6 per cent of the vote. Photograph: Mark Blinch/Reuters

Trudeau congratulated Singh and said he looked forward to speaking with him soon and working together for Canadians.

Singh, who has penchant for colourful turbans, is the first member of a minority community to lead a major federal political party.

He now has the difficult task of rebuilding the party that lost 59 seats in the 2015 election.

“This race has renewed excitement in our party,” Singh said, calling the win an “incredibly profound honour”. 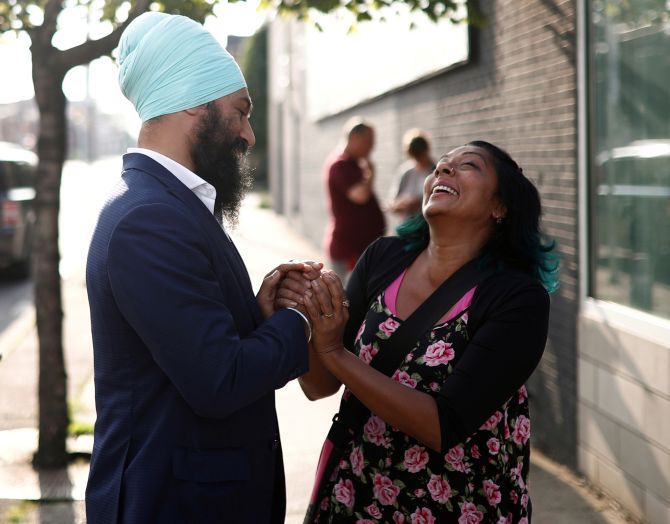 IMAGE: Singh has a penchant for colourful turbans and has received attention for his sharp style.
Photograph: Mark Blinch/Reuters

The New Democratic Party is currently at the third place in Canada’s Parliament, with 44 of 338 seats. The party has never held power.

In the 2011 general election, the party made historic gains only to lose almost a million votes -- mostly to Trudeau’s Liberals -- four years later.

Singh said he would focus on issues of climate change, reconciliation with indigenous peoples, and electoral reform, The Globe and Mail reported.

He has received attention for his sharp style.

Earlier this year, he told the American magazine how his personal style, which includes brightly coloured turbans and well-cut suits, became part of his political brand. 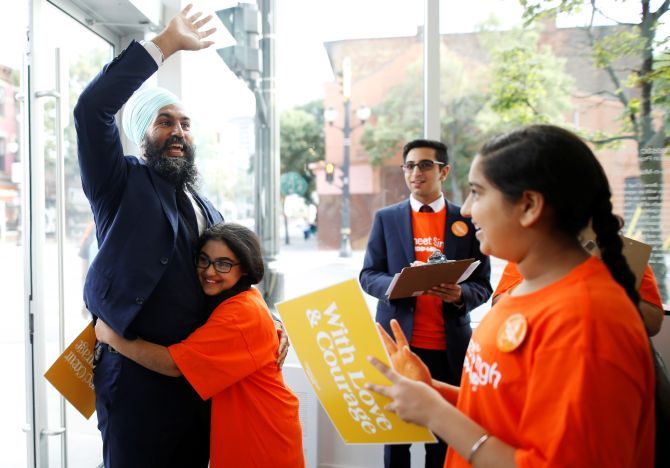 During the leadership campaign, he raised far more money than his competitors did and he said he believes he can continue that success as leader.

Born in Scarborough, Ontario, to immigrant parents from Punjab, Singh grew up in St John’s, Newfoundland and Labrador and Windsor, Ontario.

He worked as a criminal defence lawyer in the Greater Toronto Area before entering politics.

Sikhs account for roughly 1.4 per cent of Canada’s population. The country’s defence minister Harjit Singh Sajjan is also from the community.