Heavy downpour in Hyderabad today left seven people, including four children, dead in two rain-related incidents, while traffic movement was thrown out of gear due to waterlogging in most parts of the city.

The rains caused a chaotic situation with huge traffic blocks in many parts of the city till afternoon. Several low-lying areas were inundated forcing people to vacate their houses. 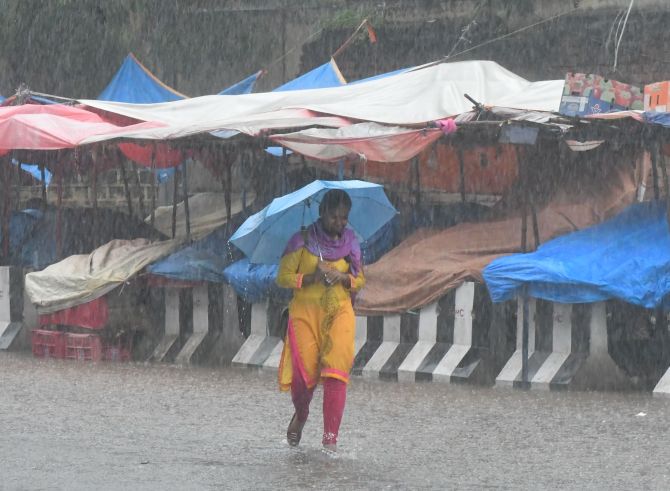 IMAGE: An employee straddles through the waters to get to work on time after public transport was severely hit in the aftermath of the heavy downpour. Photograph: SnapsIndia

Chief Minister K Chandrasekhar Rao announced Rs 2 lakh ex-gratia to the kin of the deceased, while an equal sum will be given by Greater Hyderabad Municipal Corporation and Rs 50,000 under 'Apathbandhu' scheme, as applicable.

Rao held a meeting with state Municipal Administration and Urban Development Minister K T Rama Rao, senior officials of GHMC, police and other departments concerned and reviewed the situation, a statement from the CM's office said.

Four members of a family, including parents and their two children, were killed when an under-construction wall collapsed on their hut in Ramanthapur area, K T Rama Rao said. 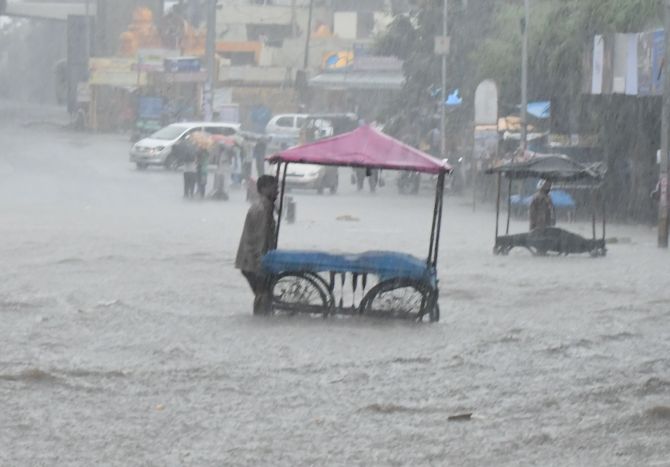 IMAGE: Public life was hurt by the rising water levels after as many as seven people died in rain-related incidents. Photograph: SnapsIndia

The victims were asleep when the mishap occurred, a police official said.

In the other incident, three members of a family, including a woman and her two daughters, died when a part of their house collapsed in Bholakpur area, the minister said.

Another building collapsed at Lal Darwaja in OldCity, but no one was injured. 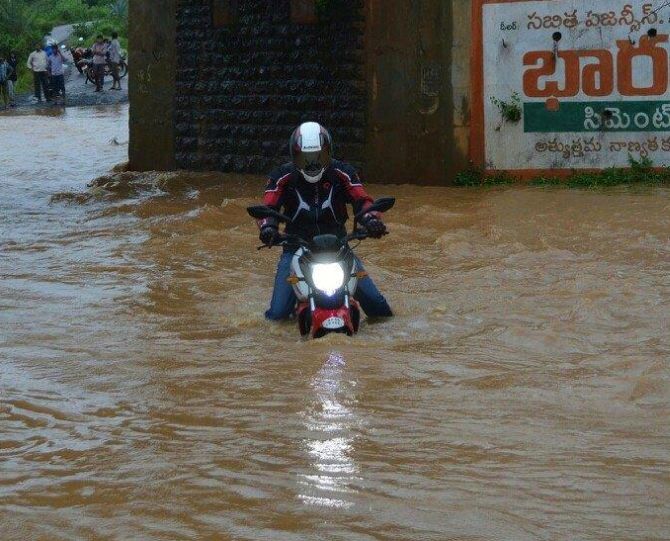 IMAGE: Employees on their way to work were stranded as water levels kept rising owing to the heavy rains. Photograph: @UrsAnurag/Twitter

Due to heavy rains, water-logging was reported at several places and GHMC teams were clearing stagnated points at Nampally, Secunderabad station, Khairatabad and other areas. Tree branches also fell in some areas due to rains.

Officials released 120 cusecs of water from the swollen Husain Sagar lake which received huge inflow of water due to the heavy rains. 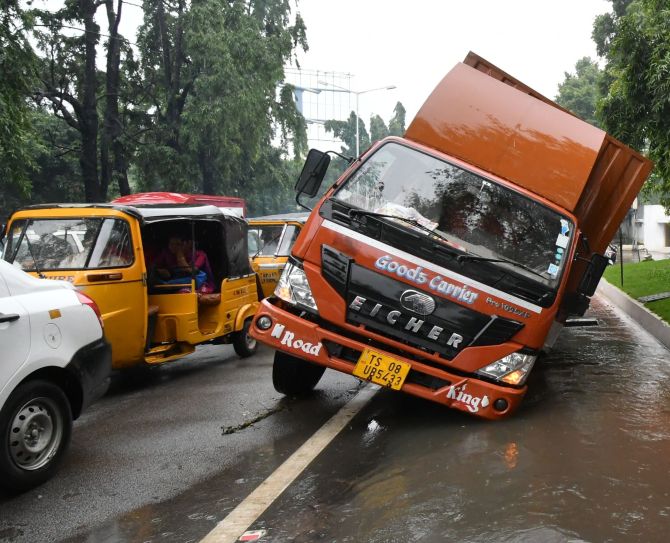 IMAGE: A truck skidded off the road and crash by the side after its port wheel broke off the chassis leading to a traffic congestion. Photograph: SnapsIndia

Later addressing a press conference, Telangana municipal administration and urban development minister K T Rama Rao said over 1,000 old buildings have been identified by GHMC in dilapidated conditions and ought to be demolished.

So far, 940 buildings have been demolished by the municipal authorities and another 95 were razed by the owners themselves.

"We need about Rs 11,000 crore to set right the sewerage system in the entire city," he said. 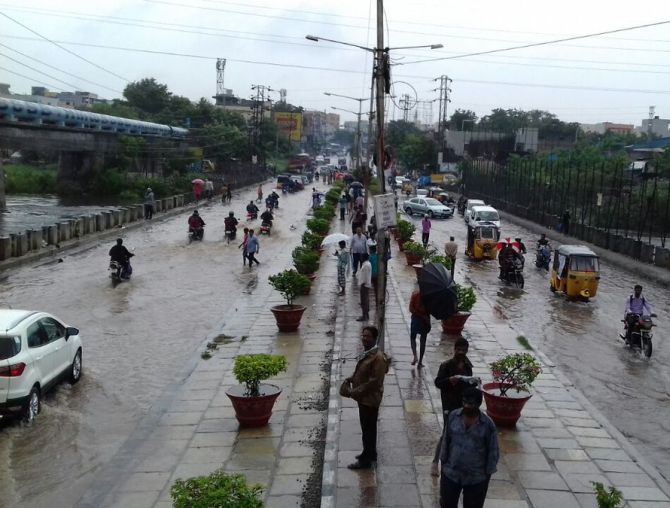 IMAGE: Rain, rain please go away! People had a tough time travelling to work even as the weatherman warned of more rain to come. Photograph: @baluadusumilli/Twitter

Office-goers had a tough time commuting to work with several roads waterlogged, while many residential areas in low-lying areas also got inundated due to the heavy rains.

Deputy Commissioner of Police (Traffic) A V Ranganath said there were reports of traffic blockade in some areas which were waterlogged due to heavy rains in the morning. 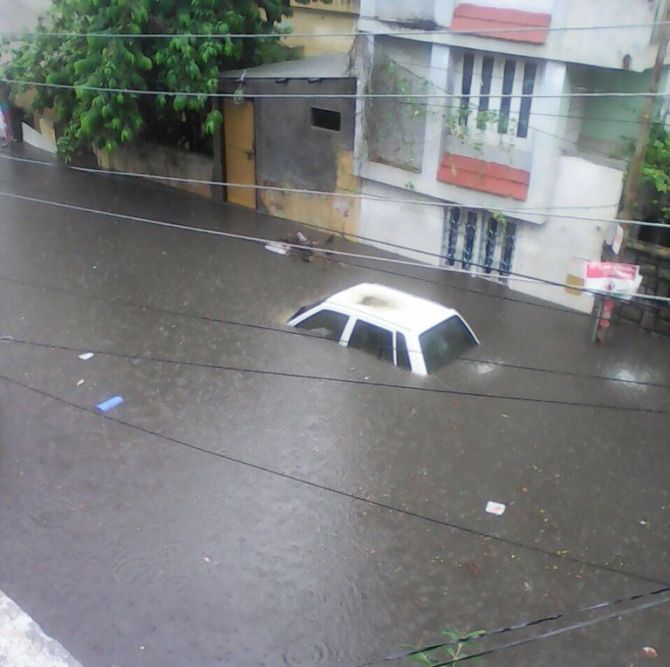 IMAGE: In many spots, the water-logging was so severe that cars had drowned. Photograph: @vasudevan_k/Twitter

"We are diverting traffic wherever it is necessary to ease the movement of vehicles. Due to overflowing of drainages there was waterlogging on some of the main roads leading to slowing down of traffic. With the help of GHMC, we are trying to clear the blockades," the DCP said.

Due to heavy rains and waterlogging in Hyderabad and Secunderabad, 10 MMTS (local) trains between 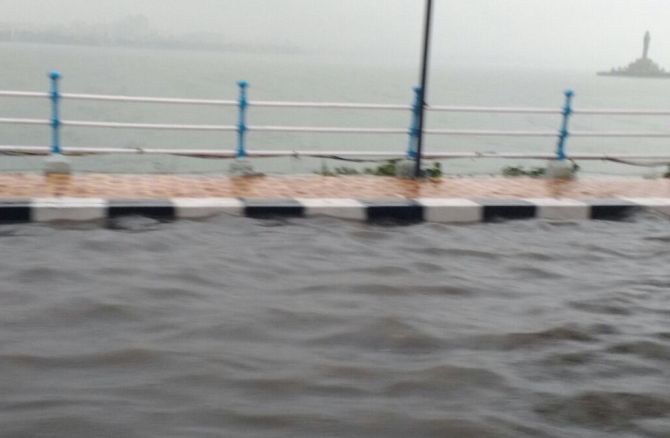 IMAGE: Can anyone side which side is the Hussein Sagar lake? Photograph: @arpitasoma/Twitter

However, on restoration of normalcy, four MMTS special trains were run between Hyderabad-Lingampalli to clear the rush of stranded passengers, South Central Railway officials said.

Amberpet received the maximum 118 mm rain in the city.

"The MeT department has predicted more rains in next 24-48 hours," KTR said. 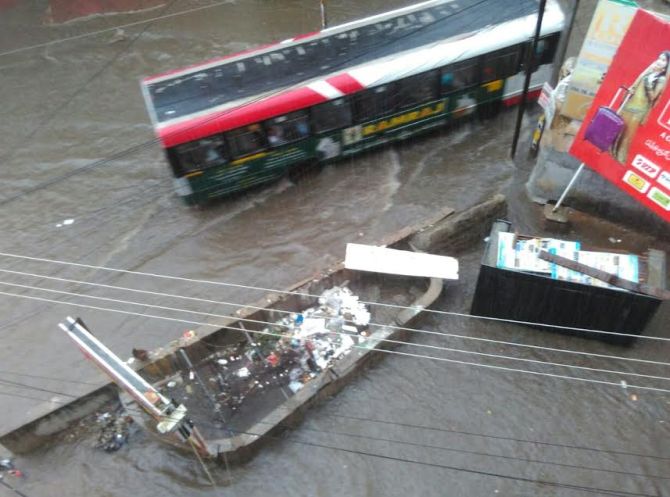 IMAGE: A bus is stranded on the road owing to the heavy rains.

Meanwhile, KTR tweeted that he is monitoring the Hyderabad rains and the resultant situation with Mayor Rammohan and Greater Hyderabad Municipal Corporation Commissioner.

"Met dept predicting more rains in next 24-48 hours," he tweeted. 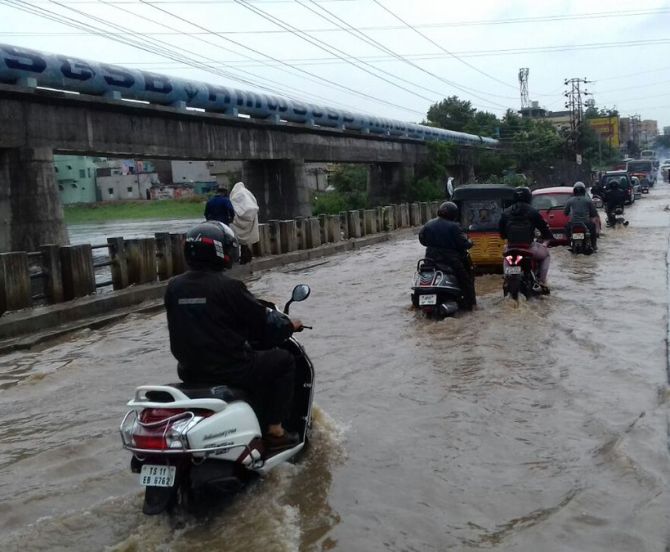 IMAGE: Greater Hyderabad Municipal Corporation Commissioner Janardhan Reddy appealed to denizens not to step out of their homes if not an emergency. Photograph: @baluadusumilli/Twitter

"We are diverting traffic wherever it is necessary to ease the movement of vehicles. Due to overflow of drainages, there were water logs on some of the main roads leading to slowing down of traffic. With the help of GHMC we are trying to clear the blockades," the DCP said.

GHMC Commissioner B Janardhan Reddy said the IMD has issued a forecast that there is a likelihood of moderate to heavy rainfall during the day. 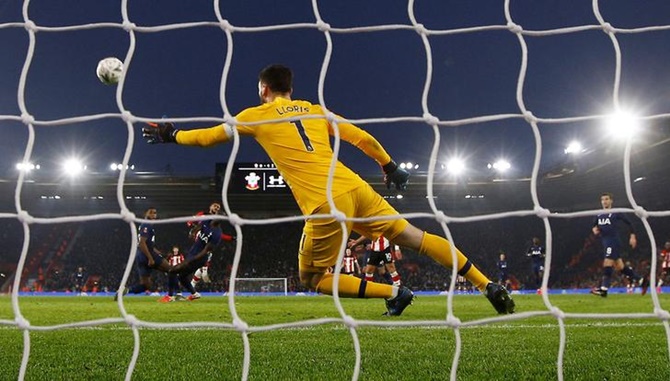