It was all fire and smoke: Eyewitnesses on Pak plane crash

Its wings sliced through rooftops, sending flames and plumes of dark smoke into the air before the Pakistan International Airlines plane with 99 people on board came crashing down with a deafening explosion onto a street according to some eyewitnesses and rescue workers. IMAGE: People stand next to the debris of a plane after crashed in a residential area near an airport in Karachi. Photograph: Akhtar Soomro/Reuters

Flight PK8303 crashed among houses in the Model Colony residential area on Friday as it approached Karachi airport, killing 97 people, including nine children.

The first Edhi ambulance reached the site of the crash within 10 minutes.

The narrow streets were a maze of parked cars, plane debris and rubble from damaged houses. Only one car could pass through at a time, recounts Faisal Edhi, head of the Edhi Foundation.

Edhi said that since the street was littered with burning wreckage from the aircraft, most of the rescue work happened from the rooftops of adjoining houses.

He said the people who witnessed the crash told him that the plane had hit a water tank before it came crashing down on a 20-foot street which was blocked by the plane debris.

"I was coming out of the mosque and saw the plane flying very low. It crashed against a building, sending flames and smoke in the air. There was a loud explosion and when I reached the site, all I could see was burning wreckage of the aircraft," an eyewitness told BBC Urdu. 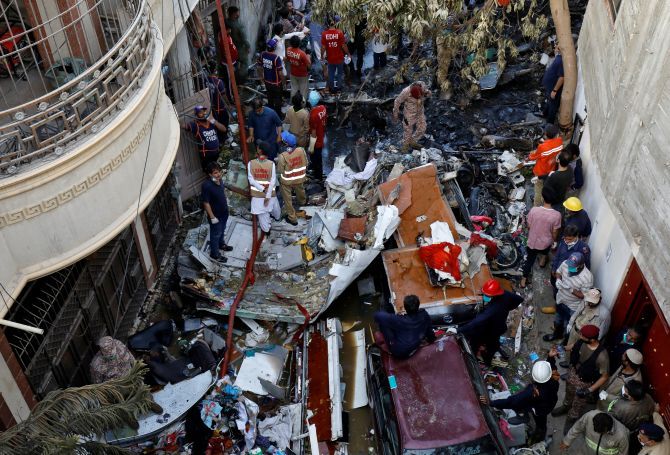 "I reached the accident before the police came. I heard a loud explosion and someone screaming for help inside a car. I pulled a man and a woman out of the vehicle. All I could see were rubble, fire, and smoke. Three houses were badly damaged," said Kamran, another eyewitness.

"Almost four houses completely collapsed, there was so much fire and smoke. They are almost my neighbours, I can't tell you what a horrible thing it was," eyewitness Mohammed Uzair Khan told the BBC, adding that he heard a massive sound and went outside his home.

The plane was only just short of the runway perimeter when it struck houses in the Model Colony residential area. TV footage showed rescue crews combing through debris strewn across the streets of the densely populated zone. A number of cars were set on fire. 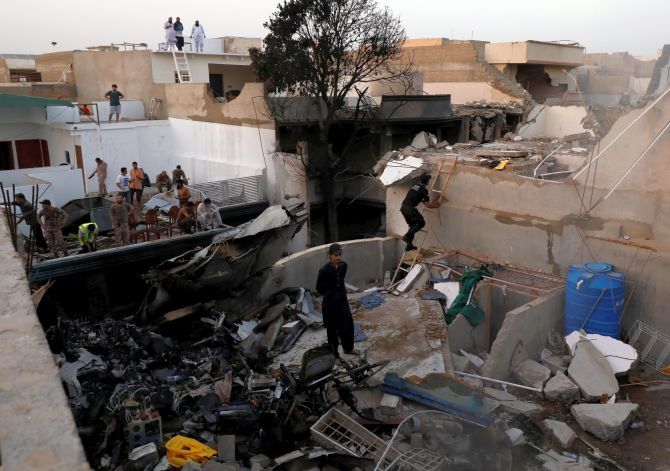 IMAGE: People stand on a roof of a house amidst debris of a passenger plane, crashed in a residential area near an airport in Karachi. Photograph: ANI Photo

Pakistan Prime Minister Imran Khan said he was "shocked and saddened" by the crash, tweeting that he was in touch with the state-owned airline's chief executive.

"Shocked & saddened by the PIA crash. Am in touch with PIA CEO Arshad Malik, who has left for Karachi & with the rescue & relief teams on the ground as this is the priority right now. Immediate inquiry will be instituted. Prayers & condolences go to families of the deceased," he said on Friday.

Khan also thanked leaders of other countries for their condolences and sympathies following the crash of the passenger plane in Karachi.

"I thank world leaders for reaching out to condole over the tragic air crash and loss of precious lives. The people of Pakistan value this support and solidarity in our hour of grief," he said in another tweet.

Prime Minister Narendra Modi expressed his condolences over the tragic incident on Friday.

"Deeply saddened by the loss of life due to a plane crash in Pakistan. Our condolences to the families of the deceased, and wishing speedy recovery to those injured," Modi said in a tweet.

The Pakistan International Airlines plane was flying very "smoothly" but while attempting to land, it "jolted" thrice and then the pilot "adroitly lifted" the aircraft off the ground, only to crash moments later, recounts Muhammad Zubair, one of just two passengers who miraculously survived the fiery crash.

Zubair was among 99 passengers on board the Pakistan International Airlines Airbus A-320 aircraft that plunged into a densely populated residential area near the airport here on Friday, killing 97 people, including nine children.

Flight PK-8303 from Lahore crashed at the Jinnah Garden area near Model Colony in Malir on Friday afternoon, minutes before its landing in Karachi's Jinnah International Airport. Eleven people on
the ground were injured.

"The plane was coming very smoothly, 8303 of PIA. My seat was 8F. When it was reaching Jinnah International Airport, the pilot announced that 'we are landing, fasten your seat belts'. We fastened seat belts. While landing, the plane jolted three times. Then it came on the runway and was on it for a brief time. Then I don't know what happened, that the pilot adroitly lifted the plane off the ground," Zubair, who is being treated for burns in a hospital in Karachi, said.

"The pilot then flew the plane for 10 or 15 minutes. Then he again announced that the plane was landing. When this announcement was made, I looked down and it appeared to me that we were (flying)
over the Malir Cantonment (area, where it was to land. Then when it was about to land, suddenly it crashed)," he said.

Zubair also gave a statement on Friday in which he said that the plane started wobbling as it approached Karachi airport.

"The next moment there was a hard crash and I lost consciousness," said Zubair, adding that when he woke up there was 'smoke everywhere'.

The hospital administration said that Zubair faced minor injuries and is currently under treatment at the burns ward.

The only other survivor of the crash was Bank of Punjab Chief Executive Officer Zafar Masud.

He spoke to his mother on the phone and informed her about his health.

Masud sustained fractures to his hip and collar bones, the Darul Sehat Hospital's administration said, adding that there were no burn marks on his body, but only scratches.

According to the hospital administration, Masud's CT scan has been done and his condition is out of danger.