Bright lights illuminate the surreal scene deep inside the tunnel: slush and mud, tread marks of vehicles that have been going in and out for the past week, and a single excavator still at work.

But the pace of work during the day has been slow, officials said.

Water is seeping out from the yet to be cleared portion of the tunnel, and is being continuously pumped out.

But that also means more slush. Fewer rescue workers were at the job during Tuesday evening than the day before.

In the evening, a PTI photographer went down the sloping tunnel, from where tonnes of sludge and debris and 11 bodies have excavated since the rescue effort began after a flash flood on February 7.

At around 150 metres, it's easy to see what the rescue workers are up against.

A solid wall of mud blocks the rest of the tunnel. 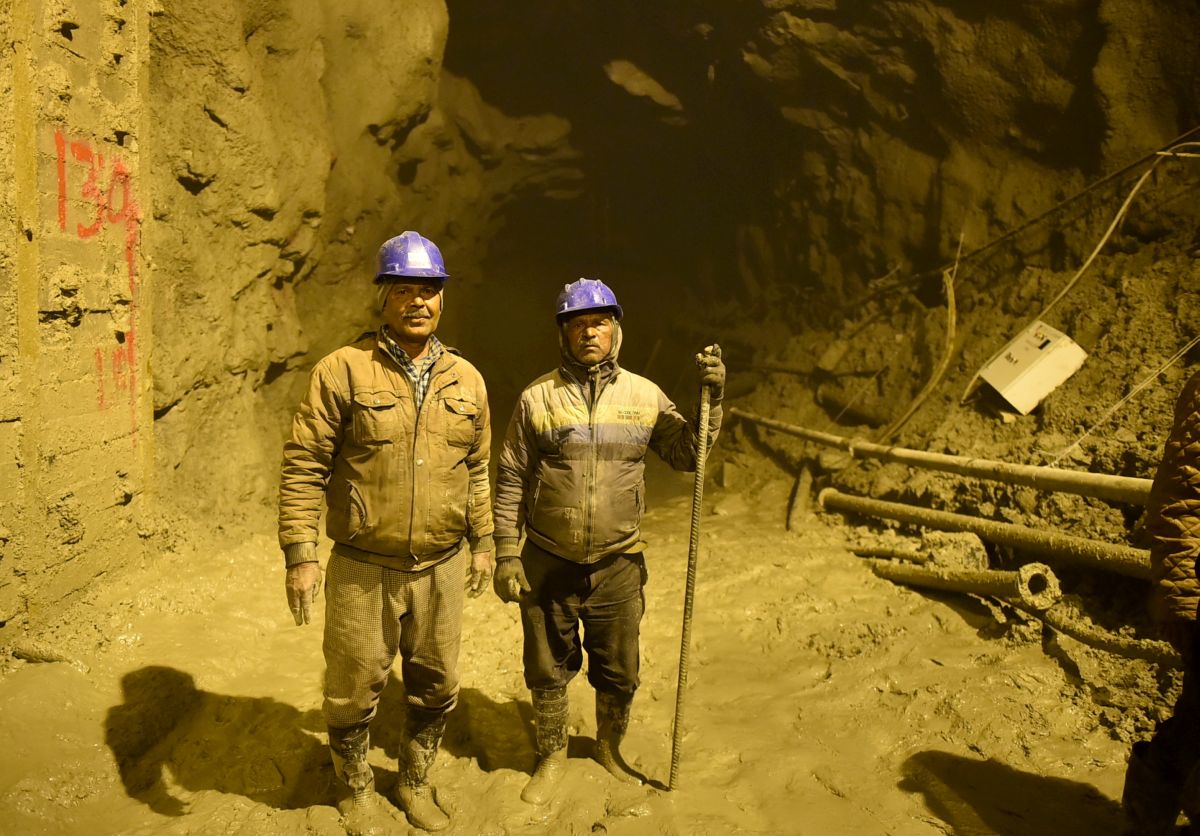 Munna Khan and Mithlesh Singh, who worked at the devastated NTPC power project on Dhauliganga, are now deployed in the rescue effort at the same.

Singh indicates that he might have been one of the victims had he been on duty that Sunday.

The bodies they found were pressed against the walls or the roof of the choked tunnel. 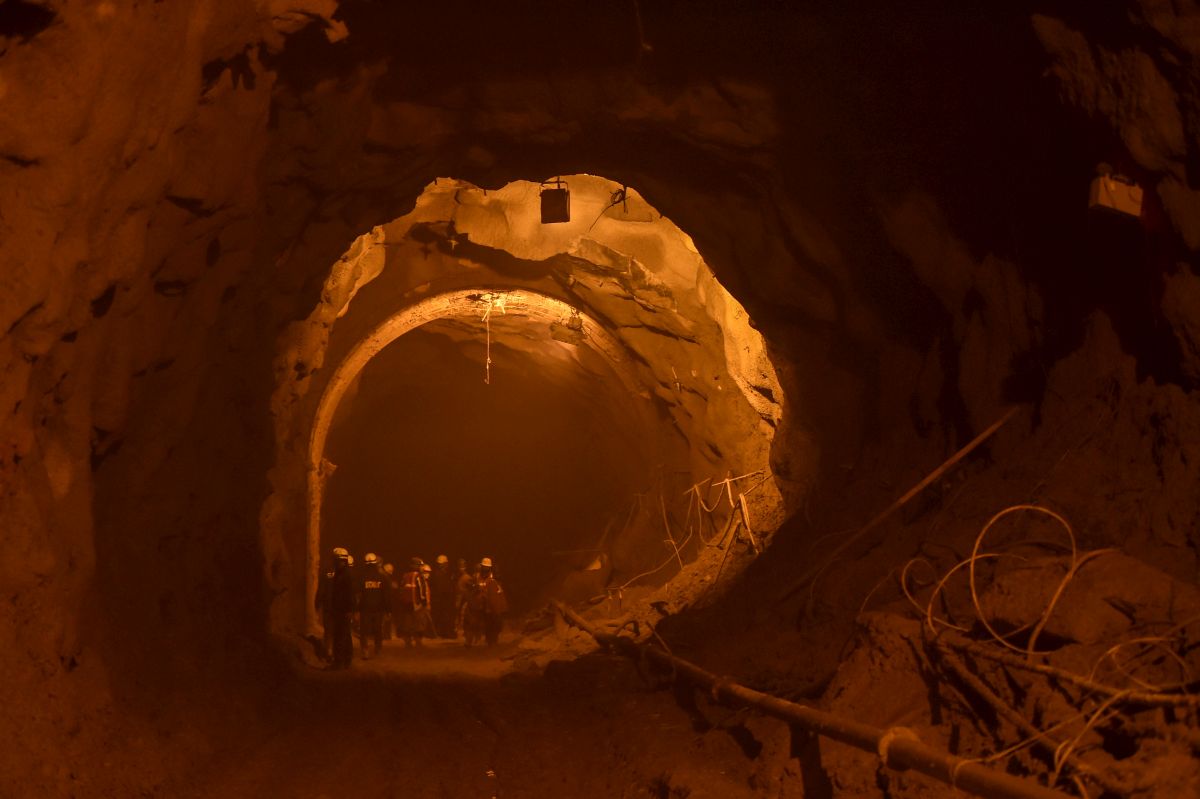 On most days, an excavator and a truck are put on the job of removing the sludge and the debris.

The excavator dumps its load on to the truck, which then heads back to the mouth of the tunnel.

But the water seepage and the slush on Tuesday have made rescue agencies deploy just the lone excavator which makes trips up and down the tunnel. 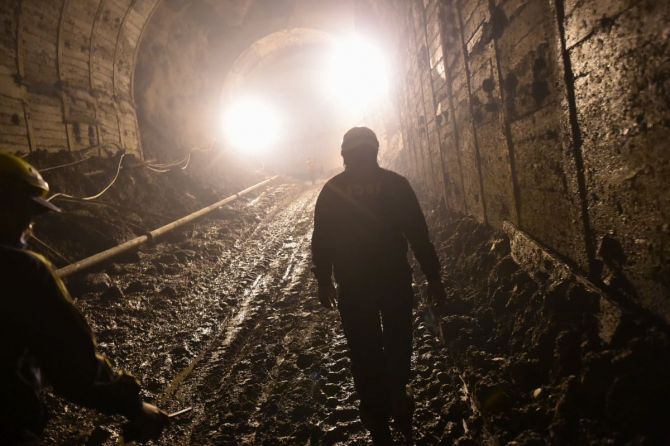 Rescue workers typically work four-hour shift, and are relieved by the next batch of men.

Breathing in the tunnel is somewhat harder, as if the oxygen level is depleted.

The disaster was possibly triggered by an avalanche in the upper reaches of the Alaknanda river system. 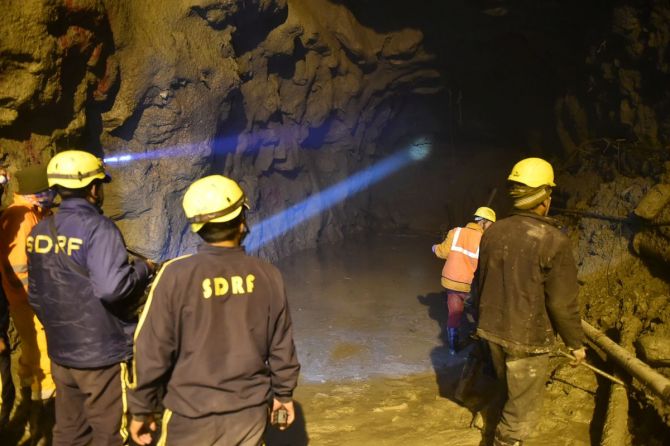 A surge in the Dhauliganga devastated the National Thermal Power Corporation's Tapovan power project, which has become the focus of the rescue effort.

Before ramming into the Tapovan site, the flood waters devastated the much smaller hydel unit at Raini.

Several villages too were cut off for a few days.

So far, it has been just the bodies.

IMAGES: Rescue operations continue inside the Tapovan Tunnel, following the glacier burst at Joshimath which triggered a massive flash flood on February 7, in Chamoli district of Uttarakhand. Photographs: Arun Sharma/PTI Photo
Arun Sharma
© Copyright 2022 PTI. All rights reserved. Republication or redistribution of PTI content, including by framing or similar means, is expressly prohibited without the prior written consent.