IMAGE: Voters stand in a queue to cast their votes at a polling booth, during the 4th phase of Lok Sabha elections, in Jodhpur, Rajasthan. Photograph: PTI Photo

Incidents of violence in West Bengal and Odisha that left a Congress worker dead and Electronic Voting Machine glitches were reported in the fourth phase of Lok Sabha polls on Monday which saw 64 per cent turnout in 72 seats across nine states. 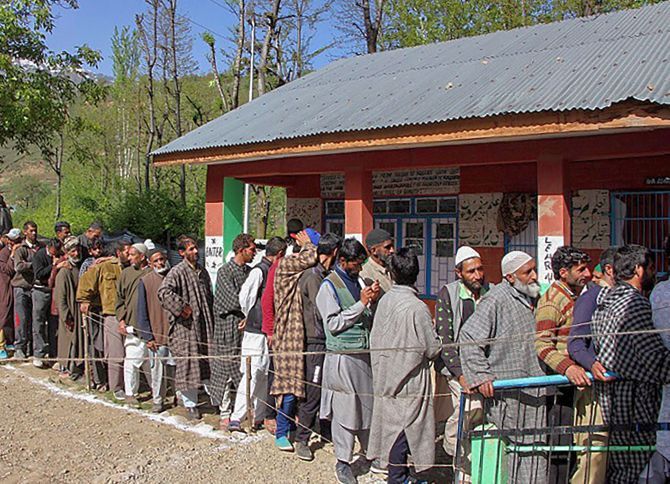 IMAGE: People wait in a long queue to cast their votes at a polling station, during the 4th phase of Lok Sabha elections, in Kulgam district of south Kashmir. Photograph: PTI Photo

West Bengal recorded a high turnout at 76.66 in the eight seats though clashes broke out between supporters of TMC and BJP in Nanoor, Rampurhat, Nalhati and Suri areas of Birbhum seat, leaving several people injured.

In Barabani, BJP candidate from Asansol and Union minister Babul Supriyo's vehicle was vandalised allegedly by Trinamool Congress workers outside a polling station while in Dubrajpur area central security forces personnel reportedly opened fire in the air to disperse irate people who attacked them when they were barred from entering the booths with mobile phones. 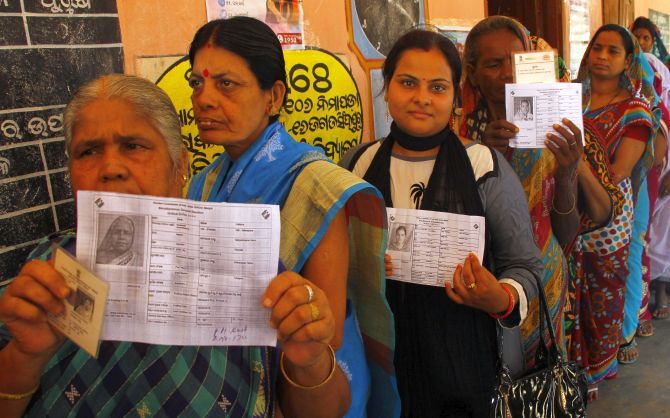 IMAGE: Woman voters show their identity cards as they stand in a queue to cast their vote at a polling station, during the 4th phase of Lok Sabha elections, in Nimapara, Puri. Photograph: ANI Photo

An FIR was registered against Supriyo for allegedly getting into an argument with polling officials, an election official said. The ruling TMC and the BJP accused each other of intimidating voters in the state, which has seen violence in all previous three phases despite stepped up central forces deployment.

The stakes are high for the BJP which had won 56 of these 72 constituencies in the 2014 polls. About 12.79 crore people were eligible for voting in the fourth phase. With this round, polling has been completed in 374 seats out of 543.

According to a senior police officer, violence was reported from several places in six parliamentary seats in Odisha, where the turnout was 64.05 per cent. 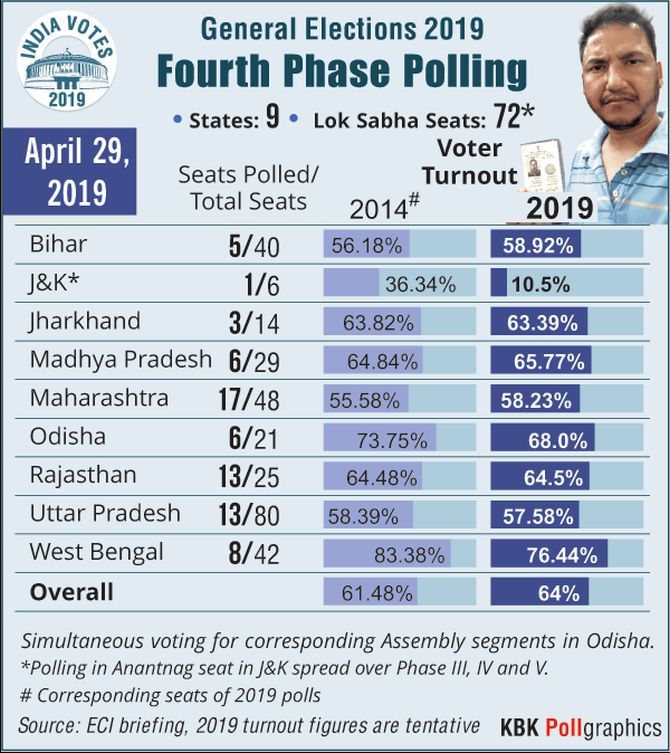 A Congress worker was stabbed to death in Balikuda-Erasama are of Jagatsinghpur seat while he was returning from a polling booth. The victim, Lachman Behera, had recently quit the Biju Janata Dal to join the Congress, the official said.

Clashes between supporters of the ruling BJD and the BJP were reported from Jajpur Kendrapara and Balasore Lok Sabha seats amid allegations poll rigging.

Technical glitches in EVMs delayed polling in 60 booths, but it resumed after the snags were rectified. 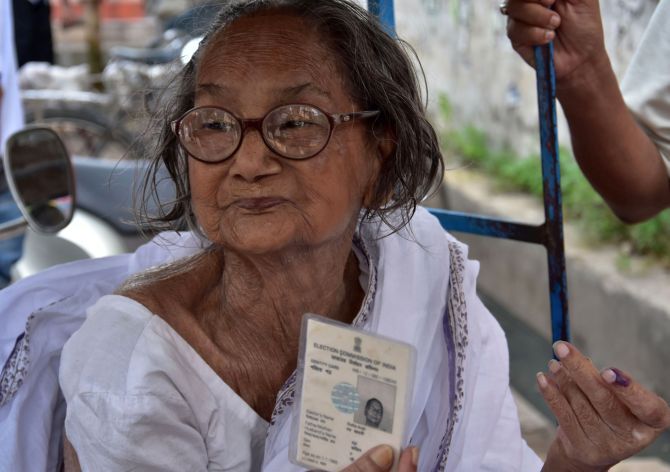 IMAGE: An old woman after casting her vote at a polling booth in West Bengal's Nadia district . Photograph: ANI Photo IMAGE: A voter shows her inked marked finger after casting vote at a polling station in Samastipur district of Bihar. Photograph: PTI Photo

Polling was peaceful in Rajasthan, with tribal dominated seat of Banswara recording the highest voting percentage at 72.34, followed by Barmer which recorded 72.21 per cent voting, according to state election officials.

Nearly 55.86 per cent voting was recorded in Maharashtra (17 seats), 59.02 per cent Bihar (five seats) and 64.38 per cent Jharkhand (3 seats), according to data provided by the Election Commission. 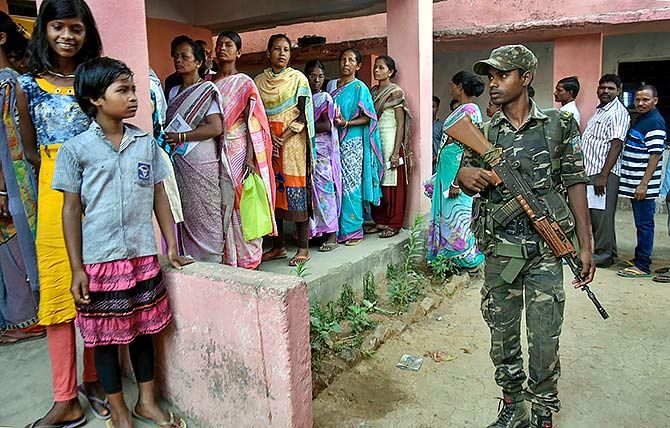 In Kulgam district of Anantnag constituency in Jammu and Kashmir, 10.5 per cent polling was recorded, amid isolated incidents of stone pelting. This was the second of the three-phase polling in the sensitive seat. 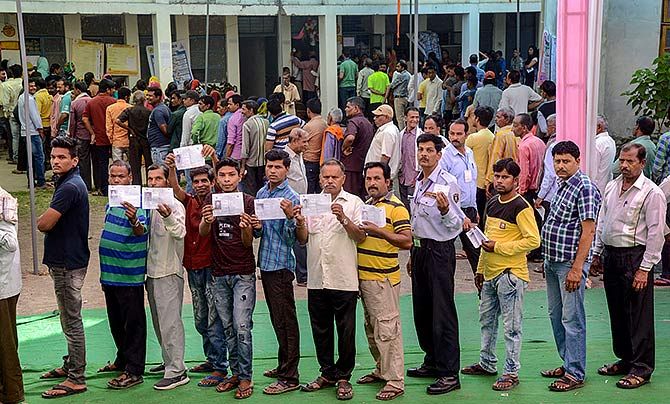 Billionaires and Bollywood stars lined up outside polling stations along with the common folks in Mumbai, where polling was held in six constituencies. Celebrities including Amitabh Bachchan, the Khan troika of Shah Rukh, Salman and Aamir, Deepika Padukone, Sachin Tendulkar along with his wife and Shiv Sena chief Uddhav Thackeray cast their votes in Mumbai. Actors Priyanka Chopra, Rekha, Aamir and his wife Kiran Rao were among the early voters. 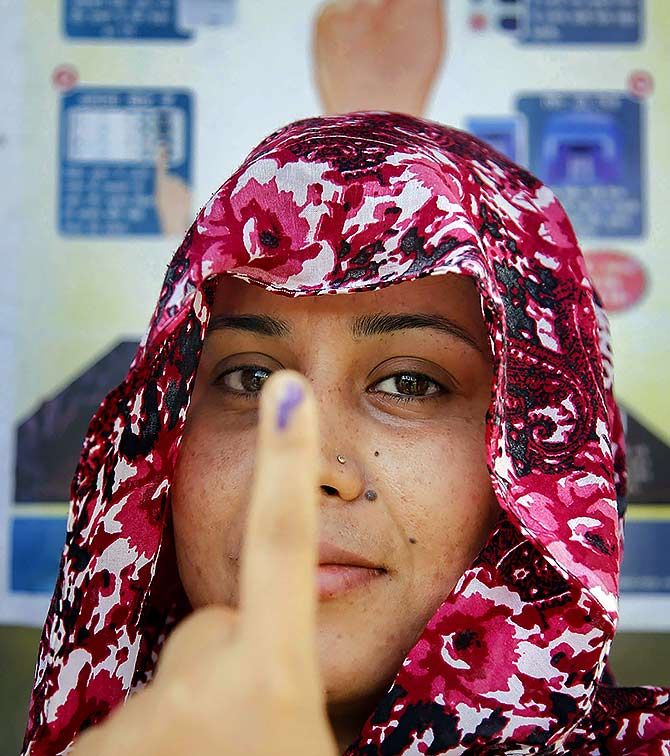 IMAGE: A migrant Kashmiri Pandit woman shows her inked finger after she cast her vote for Kulgam parliamentary seat at a polling station on the outskirts of Jammu. Photograph: PTI Photo

In Uttar Pradesh, opposition Samajwadi Party's alleged that many EVMs malfunctioned and in Kannauj, from where SP chief Akhislesh Yadav's wife and sitting MP Dimple Yadav is contesting, several party workers were prevented from coming out of their homes to vote.

In Kanpur, BJP workers allegedly tried to barge into a polling booth and clashed with the police. A case was registered against BJP leader Suresh Awasthi and six others in this regard, Kanpur District Magistrate Vijay Vishwas Pant said.

IMAGE: Voters stand in a queue to cast their vote at a polling station in Begusarai. Photograph: PTI Photo

Reports were received of EVMs malfunctioning in Bidhauna area in Kannauj following which polling remained suspended for over an hour. Complaints were also reported in Etawah under Auriaya district, with voters claiming they had to wait for hours at polling booths in Tilak Mahavidyalaya, Sahupur, Ajitmal and Dalelnagar to cast their votes. 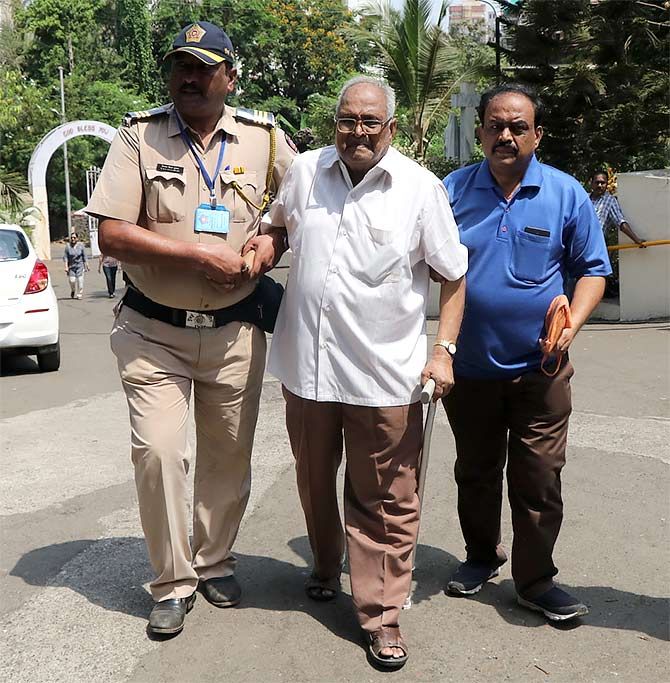 IMAGE: A police official helps a senior citizen to reach at a polling booth in Mumbai to cast his vote. Photograph: Hitesh Harisinghani/Rediff.com

According to a report from Hardoi, an elderly woman voter complained that the presiding officer at Jamkara booth forcibly pressed the EVM button. The sector magistrate removed the officer and handed him over to the police.

Besides Dimple Yadav, prominent candidates in the fray in this phase are former ministers Salman Khurshid (Farrukhabd) and Sriprakash Jaiswal (Kanpur) of Congress, UP minister Satyadev Pachauri (Kanpur) and Sakshi Maharaj of BJP (Unnao) 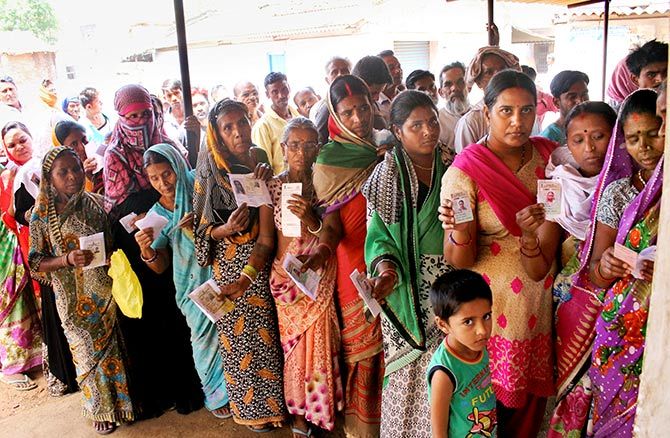 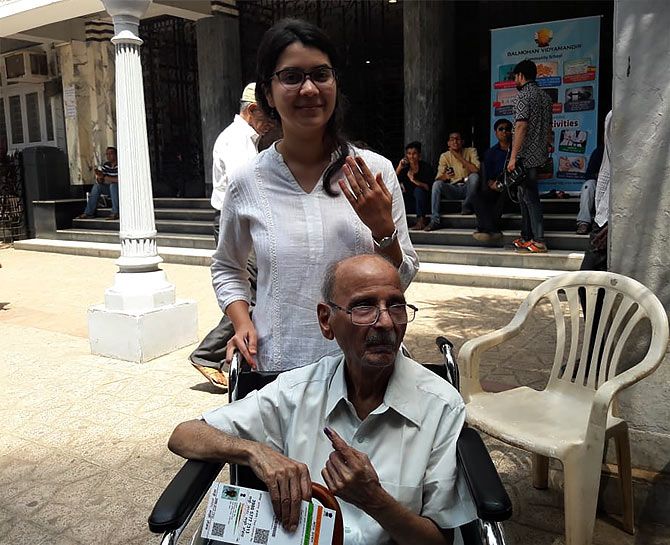 Voting was also held for 41 assembly seats in Odisha and Chhindwara assembly bypoll in Madhya Pradesh, where Chief Minister Kamal Nath is contesting. Election to 542 Lok Sabha seats is being conducted in seven phases between April 11 and May 19. Election in Vellore constituency in Tamil Nadu was cancelled. Results will be declared on May 23. 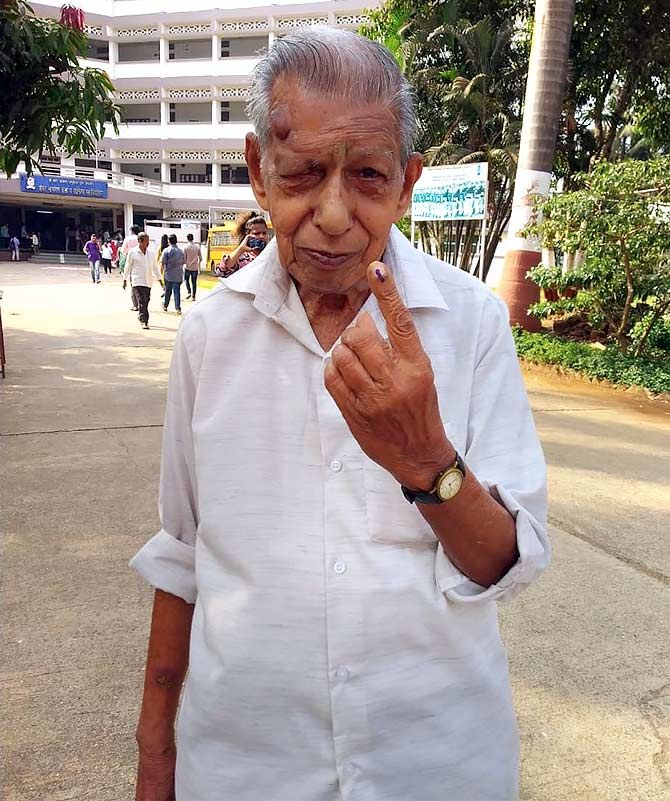 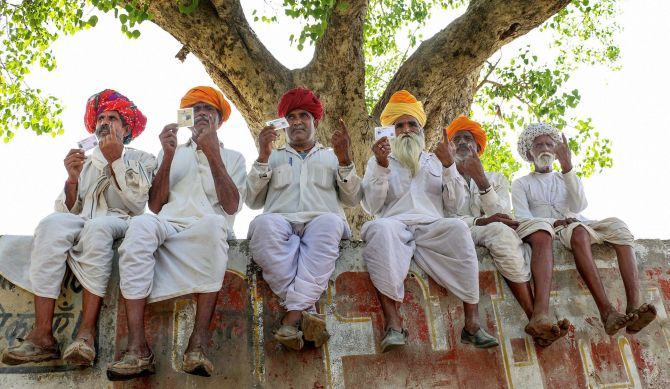