With a record single-day surge of 55,078 infections, India's COVID-19 caseload raced past 16 lakh on Friday, just two days after it reached the 15-lakh mark, while the number of recoveries rose to 10,57,805, according to Union health ministry data. IMAGE: A COVID-19 patient being taken to the hospital in an ambulance at Bhangagarh in Guwahati. Photograph: ANI Photo

The country has so far registered 16,38,870 instances of the coronavirus infection. The death toll increased to 35,747 with 779 fatalities being reported in 24 hours, the data updated at 8 am showed.

This is the second consecutive day that COVID-19 cases have increased by more than 50,000. The total number of confirmed cases also includes foreigners.

According to the Indian Council of Medical Research, a cumulative 1,88,32,970 samples have been tested up to July 30 with 6,42,588 being examined on Thursday. 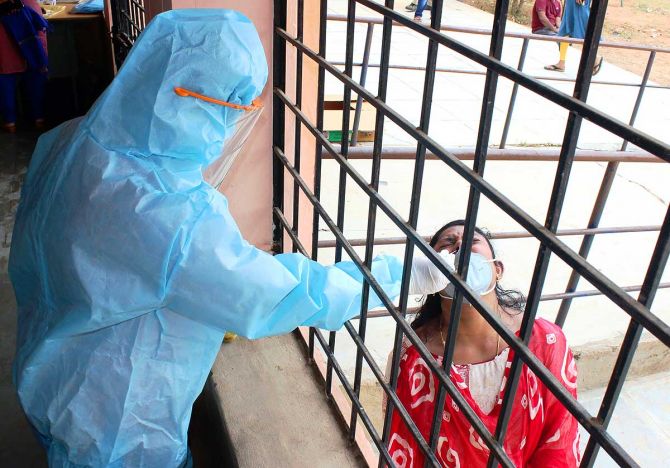 Of the 779 deaths reported on Friday, 266 were from Maharashtra, 97 from Tamil Nadu, 83 from Karnataka, 68 from Andhra Pradesh and 57 from Uttar Pradesh.

Ten fatalities have been reported from Odisha, nine from Punjab, five from Jharkhand, four each from Bihar, Haryana, Manipur and Uttarakhand, three each from Goa and Chhattisgarh, two each from Assam, Andaman and Nicobar Islands and Kerala while Ladakh and Puducherry recorded one fatality each.

Manipur has for the first time reported COVID-19 fatalities. 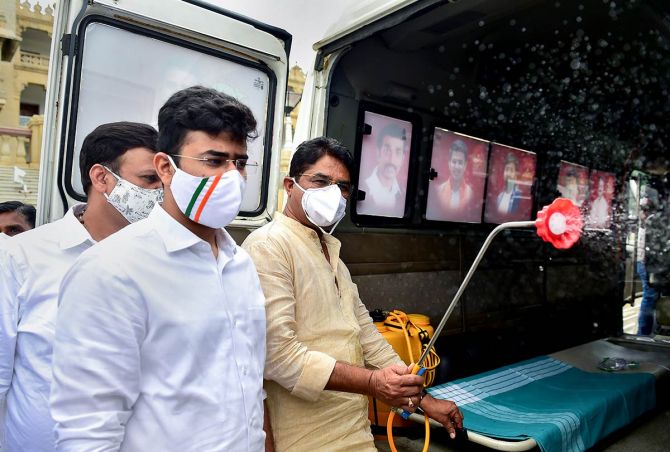 IMAGE: Volunteers spray disinfectant inside an ambulance during the launch of free ambulance service for COVID-19 patients by a private donor, at Vidhanasoudha in Bengaluru. Photograph: Shailendra Bhojak/PTI Photo

Chhattisgarh has registered 51 deaths, Puducherry 48, Goa 42, Tripura 21, Chandigarh and Himachal Pradesh 14 each, Ladakh seven, Meghalaya and Nagaland five each, Andaman and Nicobar Islands and Manipur four each, Arunachal Pradesh three, Dadra and Nagar Haveli and Daman and Diu two and Sikkim one.