Delhi on Monday emerged as the second worst-hit state by COVID-19 caseload in addition to death count though Chief Minister Arvind Kejriwal said the situation in the national capital was getting stabilised gradually while Goa reported its first fatality from the disease. 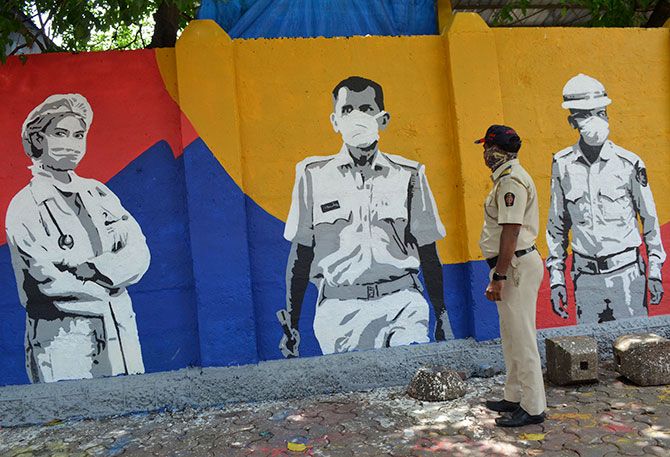 IMAGE: IMAGE: A cop looks at a mural honouring the warriors of COVID-19 in Mumbai. Photograph: Sahil Salvi/Rediff.com

As the death toll in the country from coronavirus jumped by a record 445 to 13,699, the Centre maintained that the number of infections per lakh population was among the lowest in the world.

An 85-year-old man succumbed to coronavirus in Goa on Monday, making it the first death due to the disease in the state, said Health Minister Vishwajit Rane. Goa has reported 818 infections out of which 683 are active cases. The first three cases were reported in a single day on March 25.

In its update, the ministry said the total number of recoveries stood at 2,37,195 to clock a recovery rate of 55.77 per cent.

Presently, there are 1,74,387 active cases and all are under medical supervision, it said. 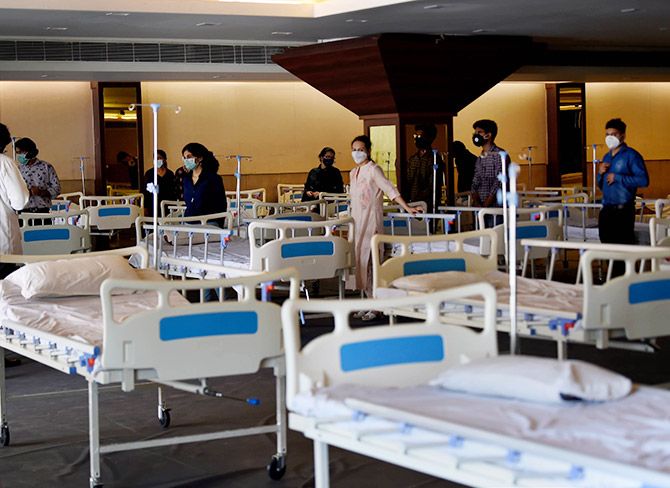 Delhi recorded 2,909 new cases taking the tally to 62,655, authorities said, adding the death toll stood at 2,233 with 58 more fatalities being registered in the last 24 hours.

The national capital has now surpassed Tamil Nadu to become the second worst affected state in terms of number of cases too after Maharashtra. Even by death count in the states Delhi is already in the second spot.

According to the central data, the tally for Tamil Nadu stood at 62,087, the third-highest in the country while the number of fatalities was 794. Maharashtra is the worst-hit state with a total of 1,35,796 cases and 6,283 deaths.

Mumbai has recorded 67,635 cases and Delhi may cross the figure in the next few days.

The death toll in the country's commercial capital was 3,735 with 20 more fatalities being reported.

Delhi Chief Minister Arvind Kejriwal told an online media briefing that in the last one week, there was a rise of only 1,000 active coronavirus cases, which indicates that the COVID-19 situation is slowly getting stabilised in the city.

Kejriwal also said his government will give pulse oximeters to the COVID-19 patients under home isolation and said the number of tests has increased by three times. The oximeters are to be returned after the patient's recovery.

Pulse oximetry is a noninvasive method for monitoring a person's oxygen saturation which is an essential element in the management and understanding of patient care.

The chief minister said till now, Delhi did not require beds for COVID-19 patients on a large scale as most of them recovered from the disease, adding the number of serious patients is also less.

The Union Health Ministry said India's COVID-19 cases per lakh people is one of the lowest in the world despite its high population density, and the recovery rate has now reached almost 56 per cent. 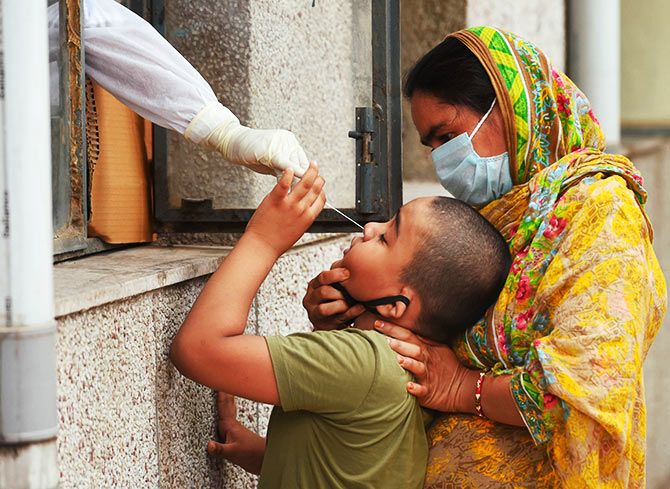 IMAGE: A medic takes a sample of a boy for COVID-19 test via rapid antigen at a overnment school in New Delhi. Photograph: Shahbaz Khan/PTI Photo

For every one lakh population, there are 30.04 coronavirus cases in India, while the global average is over three times at 114.67, the ministry said, referring to the WHO Situation Report 153, dated June 21.

'This low figure is thus a testimony to the graded, pre-emptive and pro-active approach the Government of India along with the states and UTs took for prevention, containment and management of COVID-19,' the ministry said in a statement.

Kerala reported its highest ever single day spike of 138 COVID-19 cases taking the total number to 3,308.

With increasing number of cases, the government also declared four more regions in the state as hot spots, taking the total number to 112.

The country's first COVID-19 case was recorded in Kerala on January 30.

Concerned over increase in COVID-19 cases in Bengaluru, Karnataka Chief Minister B S Yediyurappa directed officials to implement lockdown measures strictly in the clusters which have reported more number of infections.

Till Sunday evening, the state capital reported 1,272 cases of COVID-19, including 64 deaths and 411 discharges. On Sunday, as many as 196 fresh cases were recorded.

In Gujarat, nearly 300 workers of diamond units in Surat city have tested positive for coronavirus in the last 10 days, following which fresh restrictions have been imposed on the industry's operations, an official said. 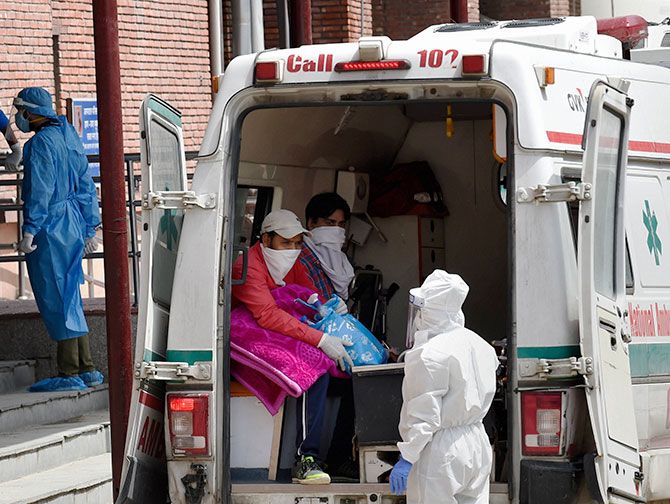 As part of the new curbs, three main diamond trading markets will remain shut twice a week, while canteens of all the diamond polishing units will remain closed on all days to contain the spread of coronavirus, said Surat Municipal Commissioner Banchhanidhi Pani.

They said eight people have already been discharged and 51 are housed in these non-air conditioned coaches, modified to work as COVID care centres.The admitted cases include women and children, the officials said.

As pharmaceutical companies launch generic versions of Remdesivir and Favipiravir for COVID-19 treatment, medical experts said it was a 'positive development' in the fight against the pandemic, but cautioned against regarding the antiviral drugs as 'game changers'.

Glenmark Pharmaceuticals has launched the antiviral drug Favipiravir, under the brand name FabiFlu, for the treatment of mild to moderate COVID-19 cases, while Cipla and Hetero have received approvals from the Drug Controller General of India (DCGI) to launch Remdesivir under the brand names Cipremi and Covifor respectively.

Cipla Ltd on Sunday announced the launch of Cipremi.

Dr Sanjay Rai, Professor at the Centre for Community Medicine, AIIMS Delhi, said till date no effective treatment or vaccine to combat coronavirus has been found.

"Till date we don't have evidence that a particular drug is effective, so we cannot call any drug game changer till then. With their launch, it will only be clear in the future how effective they will be. Whether they can play a supportive role in COVID-19 treatment is also not yet known," he told PTI.