IMAGE: A young man takes a selfie with a statue wearing a face mask in Navi Mumbai. Photograph: PTI Photo

The active cases have surpassed the 12-lakh mark, while the death toll increased to 1,70,179 with 904 new fatalities in a day, the highest since October 18, 2020, according to the Union health ministry data updated at 8 am on Monday.

The national Covid-19 recovery rate has fallen below 90 percent.

According to Johns Hopkins University (JHU) data, India has overtaken Brazil, which is now at the third spot in the Covid tally with 1,34,82,023 cases. IMAGE: A mother holds her son while a healthcare worker collects a swab sample from him for a rapid antigen test during a testing campaign for coronavirus (COVID-19), at a residential area in Ahmedabad. Photograph: Amit Dave/Reuters

Registering a steady increase for the 33rd day in a row, the active cases have increased to 12,01,009 in India comprising 8.88 percent of the total infections, while the recovery rate has further dropped to 89.86 percent.

The number of people who have recuperated from the disease surged to 1,21,56,529, while the case fatality rate has further dropped to 1.26 percent, the data stated. IMAGE: A passenger undergoes digital scanning to check his body temperature amid the rise in COVID-19 cases, at the Guwahati railway station. Photograph: Anuwar Hazarika/ANI Photo IMAGE: An apartment sealed by the health department after three persons were found corona positive, at Shalimar Garden Extension I in Ghaziabad. Photograph: PTI Photo

The 904 new fatalities include 349 from Maharashtra, 122 from Chhattisgarh, 67 from Uttar Pradesh, 59 from Punjab, 54from Gujarat, 48 from Delhi, 40 from Karnataka, 24 from Madhya Pradesh, 22 from Tamil Nadu, 21 from Jharkhand, 16 each from Kerala and Haryana and 10 each from Rajasthan and West Bengal.

The health ministry stressed that more than 70 percent of the deaths occurred due to comorbidities.

Our figures are being reconciled with the Indian Council of Medical Research," the ministry said on its website, adding that state-wise distribution of figures is subject to further verification and reconciliation. 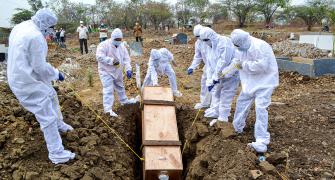