The nationwide COVID-19 tally neared 2.8 lakh on Wednesday with almost one-third of the total cases getting detected in just 10 days of June. IMAGE: A woman stands on a social distancing marker at a shopping mall after authorities allowed malls to reopen as India eases lockdown restrictions that were imposed to slow the spread of the coronavirus disease (COVID-19), in Kolkata. Photograph: Rupak De Chowdhuri/Reuters

On the positive side, the number of recovered patients has exceeded the count of active cases for the first time.

Since June 1, nearly 90,000 cases have been added to the countrywide tally of confirmed COVID-19 cases, while nearly one-third of the overall death toll has also been reported during these 10 days.

India's first COVID-19 case was detected more than four months ago on January 30, but it took more than 100 days thereafter to reach the one-lakh mark on May 18.

However, the next one-lakh cases were added in just about a fortnight and the tally can hit the 3-lakh-mark this week itself at the current rate.

More than 9,000 new cases have been emerging every day for over a week now.

India is the fifth worst-hit nation by the COVID-19 pandemic at present after the Unitd States, Brazil, Russia and the United Kingdom.

But the difference is narrowing fast with the UK, the fourth most affected country, which has reported nearly 1.9 lakh cases.

India is ranked 12th for the number of deaths, while it is at the 9th place for recoveries, as per the real-time global data compiled by Johns Hopkins University. In its morning 8 AM update, the Union health ministry said the number of active cases in the country has risen to 1,33,632, while the total number of people having recovered has now risen to 1,35,205.

The ministry's update showed nearly 10,000 new cases in 24 hours since Tuesday 8 AM, taking the country's cumulative caseload to over 2,76,583, while the death toll rose by 279 to reach 7,745.
This showed a recovery of nearly 49 per cent among the people who have tested positive so far. Nearly 50 lakh tests have been conducted across the country.

The Johns Hopkins University data, as of 9.40 PM, showed India's confirmed cases at over 2.8 lakh.

On the morning of June 1, India had nearly 1.9 lakh confirmed cases and less than 5,400 deaths had been reported till then. At that time, there were more than 93,000 active cases as against less than 92,000 recoveries.

Dr Neeraj Gupta, professor in the Department of Pulmonary, Critical Care and Sleep Medicine at the Safdarjung Hospital in Delhi, said the data shows that more and more people are recovering which is as per global trends that 80 per cent are likely to have mild disease and make 100 per cent recovery.

"This should provide hope to the people of India at large who are having a mortal fear of the disease. But then this should not make them complacent and people should follow social distancing and sanitization guidelines," Gupta said. As per global evidence, 80 per cent of COVID cases are mild cases, while only 20 per cent may develop complications which would require hospitalisation.

Globally, more than 72 lakh people have tested positive globally for the novel coronavirus ever since its emergence in China last December, while almost 34 lakh have recovered so far.

More than 4 lakh have lost their lives across the world, while recoveries are close to 34.6 lakh.

Within India, Maharashtra alone has more cases than China, which officially reported little over 83,000 confirmed cases and 4,634 deaths.

But less than 60 are now said to be undergoing treatment in China with others having been discharged upon recovery.

The number of cases in Maharashtra climbed to 94,041 on Wednesday with 3,254 new patients being detected, while the death toll rose to 3,438 with 149 new fatalities being recorded during the day.

However, more than 44,500 COVID-19 patients have recovered in the state so far.

Maharashtra Chief Minister Uddhav Thackeray said lockdown restrictions have been partially eased to allow resumption of business and other activities but the COVID-19 threat still persists.

He urged people to avoid crowding and maintain physical distancing post easing of the lockdown norms. He hinted the lockdown may get extended beyond June 30 if guidelines are not followed. 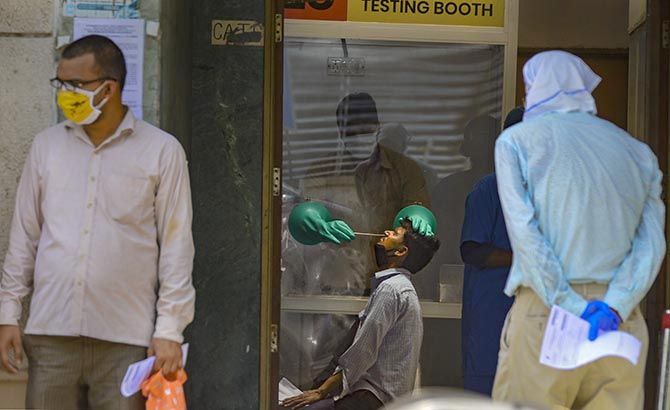 IMAGE: Suspected COVID-19 patients wait to be examined by medics at a government hospital, during the ongoing lockdown, in New Delhi. Photograph: Kamal Kishore/PTI Photo

The state government announced recruitment of more than 2,800 medical personnel including over 1,200 doctors and also proposed to double the number of beds in state government hospitals to 10,000.

In Delhi, the total count of cases crossed 32,000 with more than 1,500 new cases getting reported, while its death toll mounted to 984.

The national capital will need 1.5 lakh beds by July 31 once people start coming from other states for COVID-19 treatment, Delhi Chief Minister Arvind Kejriwal said, even as he declared that the Lieutenant Governor's orders overruling his government's decisions on coronavirus will be implemented as "this is not the time for disagreements and politics".

Kejriwal said his government has "unprecedented challenges" ahead as data shows that COVID-19 cases will rapidly increase in Delhi, but asserted that around 1,900 patients got beds in hospitals in the last eight days and 4,200 beds were still available, a claim that comes amidst reports of acute shortage of beds in healthcare facilities in the national capital.

Delhi's health minister Satyendar Jain said there is "transmission in the community" but only the Centre can declare whether "community transmission" was happening with regard to the virus infection in Delhi.

He had said on Tuesday that the source of infection is not known in nearly half of the fresh cases being reported in the national capital.Community transmission generally refers to a stage where contact tracing for a large number of infections is difficult to establish.

Warning of more trouble ahead, Delhi deputy chief minister Manish Sisodia had said on Tuesday that the number of COVID-19 cases could surge to 5.5 lakh by July 31 in the national capital itself at the current rate. Several scientists said mathematical models of the progression of COVID-19 show it would be possible for Delhi to have 5.5 lakh cases by the end of July and the community transmission of the disease may have started a while ago.

"The model that I used for India found that there could be around 8-10 lakh cases in India by mid or end of July. So it won't be surprising to get to those figures (5.5 lakh) in Delhi," said Samit Bhattacharya, mathematics professor and researcher at the School of Natural Sciences at Shiv Nadar University.

The Union health ministry said central teams have been deputed to assist state health officials in reviewing the public health measures being undertaken to combat COVID-19 in six cities of Delhi, Mumbai, Ahmedabad, Chennai, Kolkata and Bengaluru, which are seeing a large number of cases.

These teams will provide technical support and handhold the state health departments and municipal health officials for reviewing public health measures implemented for containment and management of COVID-19 outbreak in these cities.