The 10-day Ganesh festival began on Saturday under the shadow of the coronavirus pandemic, with devotees restricting celebrations to their homes and using online platforms to get 'darshan' of the Lord at temples, amid strict COVID-19 restrictions imposed by governments. 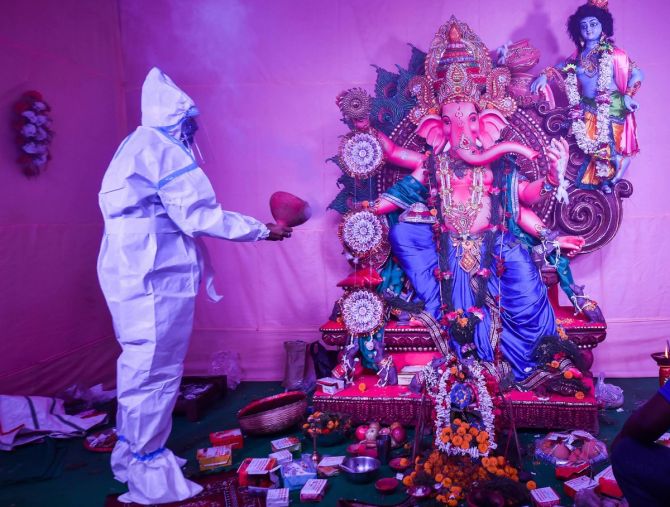 IMAGE: A devotee wearing a PPE kit offers prayers at a community puja pandal on the occasion of Ganesh Chaturthi festival, amid the ongoing coronavirus pandemic, in Kolkata, on Saturday. Photograph: Swapan Mahapatra/PTI Photo

The festival, which begins with grand processions and collective prayers at decked up pandals, this year lacked its usual pomp and show, with the Centre and state governments restricting mass gatherings and movement in the wake of the pandemic. 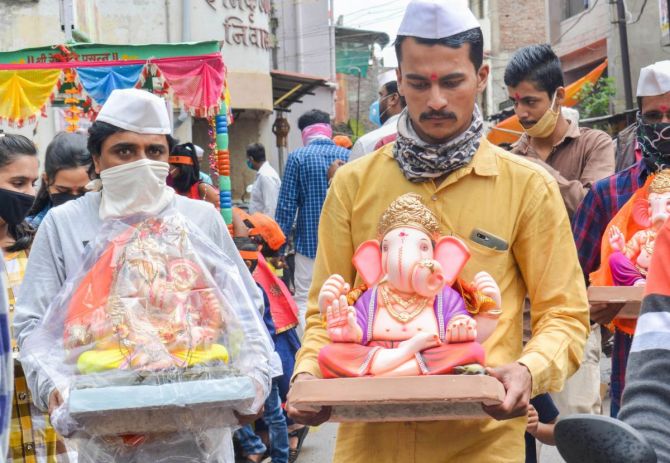 IMAGE: Devotees carry idols of Lord Ganesha after purchasing from a market, on the occasion of Ganesh Chaturthi festival, in Karad, on Saturday. Photograph: PTI Photo

Only a limited number of people wearing face masks and gloves, and maintaining social distancing installed Ganesha idols at temples, with devotees watching the process online. 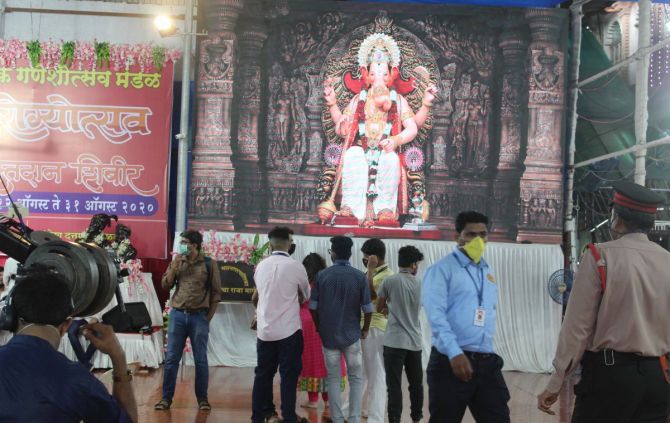 IMAGE: A digital display of previous years Ganesha idols at Mumbai's iconic Lalbaugcha Raja Ganesh Mandal, where a blood donation camp was organised this year. The Mandal, which installs Mumbai's most famous Ganpati idol, cancelled this year's celebration in view of the COVID-19 pandemic, for the first time in its 86-year history. Photograph: Sahil Salvi

The Lalbaugcha Raja, Mumbai's best-known Sarvajanik (community) Ganeshotsav Mandal, cancelled the festival this year in view of the pandemic, while Wadala's GSB Sewa Samiti, considered one of the richest mandals in the metropolis, postponed celebrations to 'Magh Shudh Chaturthi' in February next year. 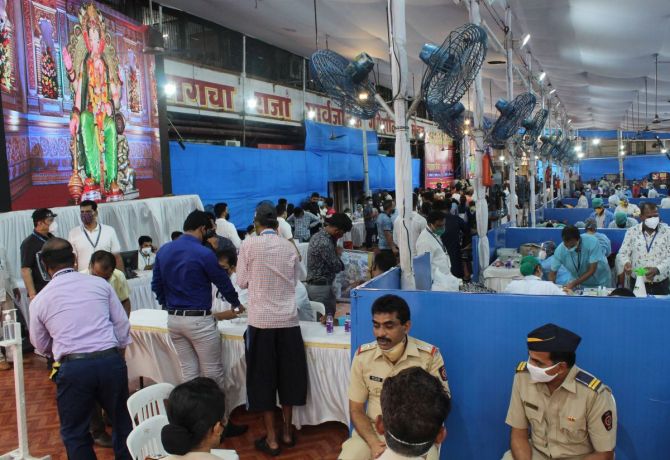 In Madhya Pradesh's Burhanpur, for the first time in the last 103 years, the idol of Lord Ganesh could not be installed at the Tilak on the first day of the festival due to the COVID-19 situation.

Freedom fighter Bal Gangadhar Tilak had started this practice in 1917 during his visit to Burhanpur bordering Maharashtra. 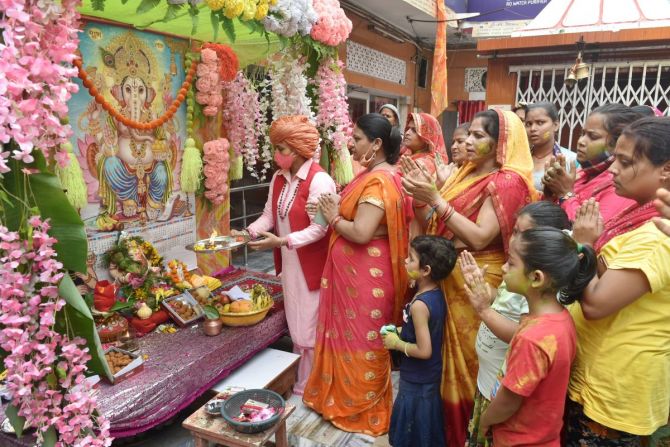 "It is after more than a century that the city has missed on its date with Ganeshiji at Tilak Hall," Maharastrian Brahmin Samaj president Arun Shende told PTI.

In Maharashtra and its capital Mumbai, the festival was missing its pomp and glory this year. 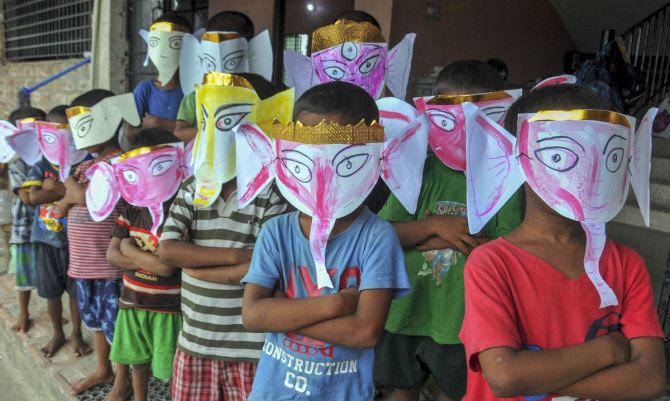 The Maharashtra government in its guidelines for Ganeshotsav celebrations has said that processions should not be taken out before installing and immersing of idols. 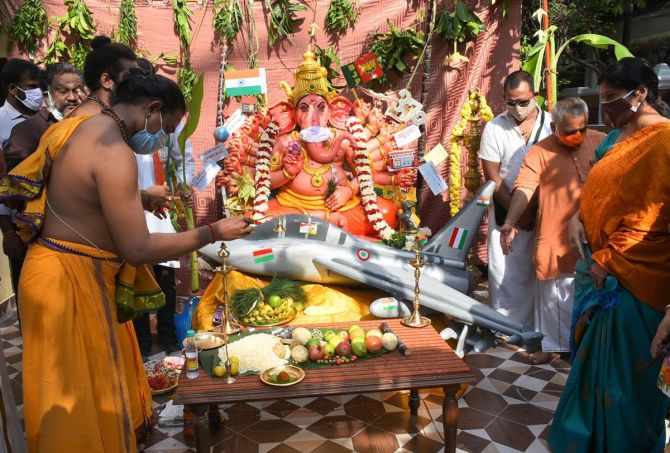 IMAGE: Priests and devotees offer prayers at state BJP office, in Chennai, on Saturday. The state government decided not to allow the installation of Lord Ganesh idols in public places and processions or their immersion in water bodies following the coronavirus outbreak. Photograph: PTI Photo

It also said that the height of idols installed by sarvajanik mandals and at households should be limited to four feet and two feet, respectively, this year. 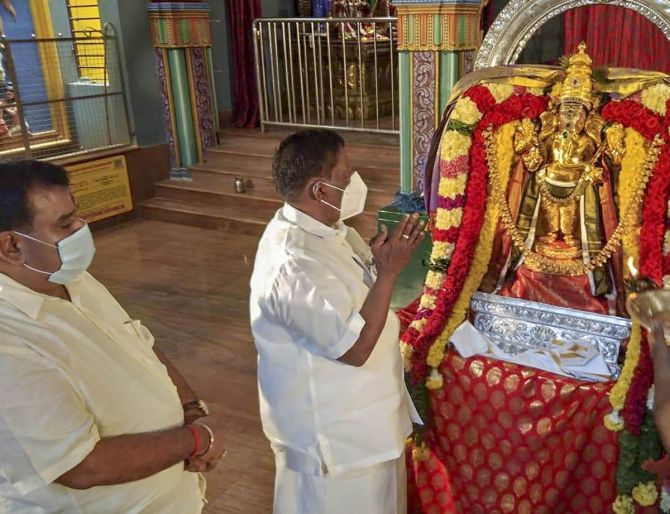 Mumbai and its neighbouring areas have been witnessing heavy rains since the last few days.

The downpour continued on Saturday morning, but people stepped out to bring home the idols of the deity amid chants 'Ganpati bappa moraya'. The festival of Ganesh Chaturthi, which is also known as Vinayaka Chaturthi, marks the birth of the elephant-headed God.

It begins on the fourth day (chaturthi) of the month of Bhadrapada, the sixth month of the Hindu calendar. It concludes after 10 days on the day of Anant Chaturdashi, when the idol is submerged in the nearest body of water. 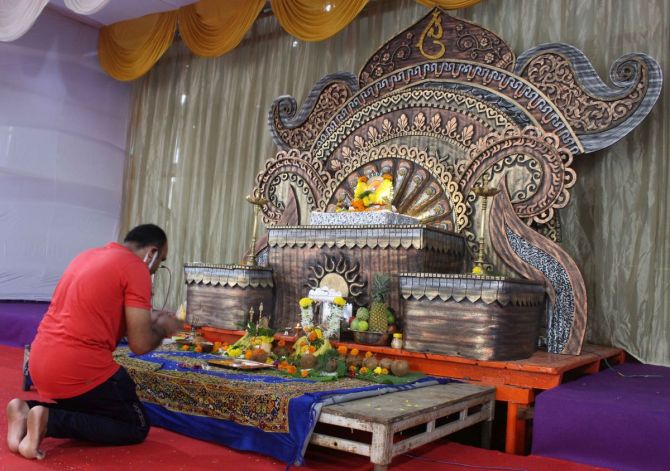 The COVID-19 and grim flood situation in certain parts of Karnataka cast their shadow on the festival this year with lacklustre celebrations across the state.

There was very poor turnout of devotees at Ganesha temples and very few installation of the lord's idols at public places this year in the state. 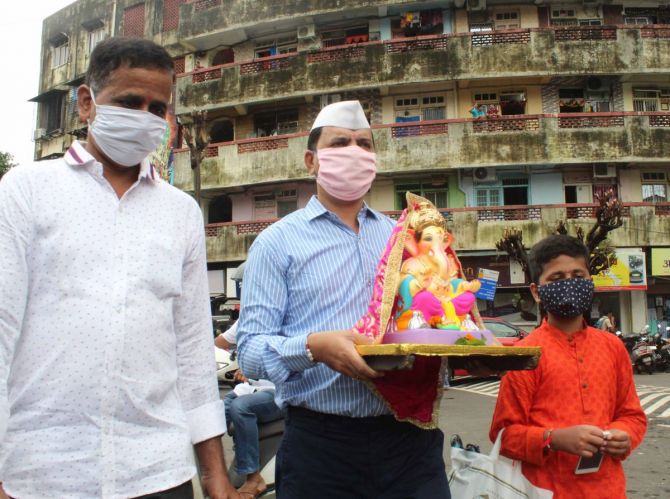 IMAGE: People in Mumbai take Ganesha idols to their homes on the occasion of Ganesh Chaturthi festival on Saturday. Photograph: Sahil Salvi

In view of the coronavirus, the state government had issued guidelines, discouraging the installation of Ganesha idols at every nook and corner.

The guidelines stated that the idol should not exceed four feet and each ward should have only one Ganesha Pandal. 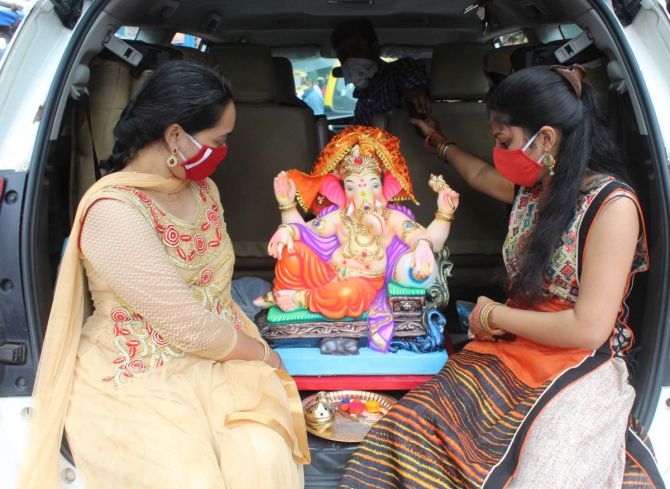 IMAGE: The Maharashtra government has issued guidelines regarding Ganeshotsav celebrations, saying that processions should not be taken out before installing and immersing the idols of the deity. Photograph: Sahil Salvi

The organisers have also been directed to ensure social distancing, compulsory mask and sanitisers.

The festival in Puducherry was a low-key affair on Saturday, with Lt Governor Kiran Bedi and Chief Minister V Narayanasamy making separate appeals to the people to stay at home and celebrated. 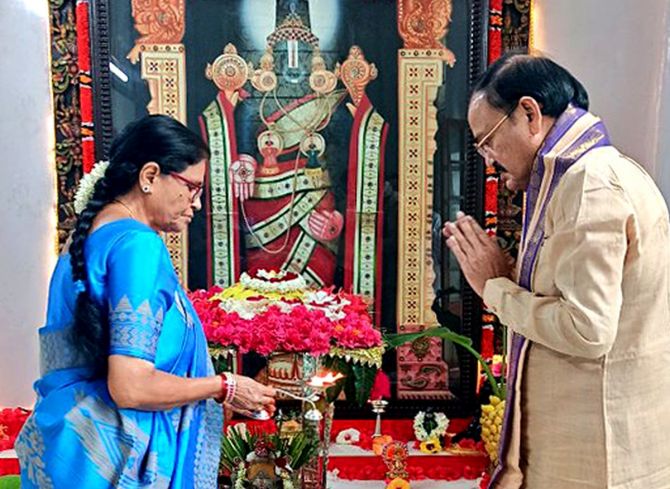 Director of Health and Family Welfare S Mohan Kumar in a WhatsApp message to the media said, 'there was lot of overcrowding in various places'.

The territorial government had already prohibited installation of tall statues of Lord Ganesha at roadsides this year. 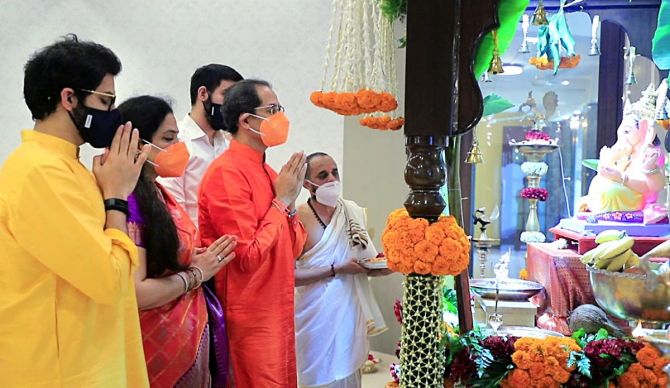 IMAGE: Chief Minister Uddhav Thackeray with his family at his official residence 'Varsha', in Mumbai, on Saturday. Photograph: ANI Photo

In Goa, people celebrated at homes and some community mandals set up pandals and installed idols, but they cancelled all cultural and other events this year to curb the spread of COVID-19. In view of the pandemic, the Goa government has issued Standard Operating Procedures (SOPs) for the Ganeshotsav celebrations, which includes not organising any welcome processions and maintaining social distancing. 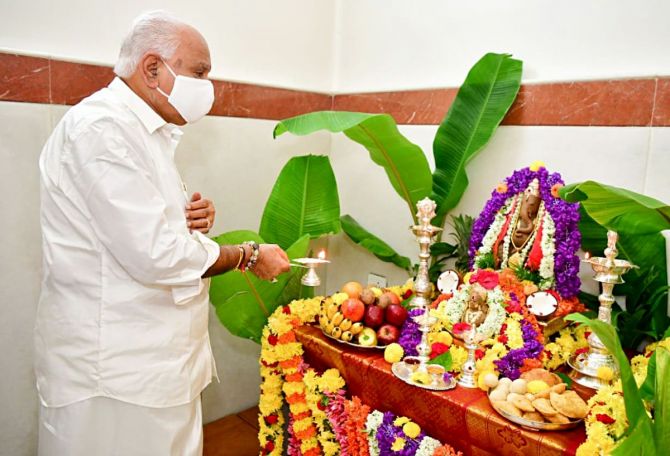 "Due to the pandemic, many people have started using virtual meeting apps on their mobiles for Ganesh pooja and other rituals," Kalash Chimulkar, a resident of Quepem in South Goa, said.

The festival was celebrated across Tamil Nadu with usual fervour, although the trademark large idols of the elephant God were missing this year in lines with a government directive in the backdrop of the COVID-19 pandemic. 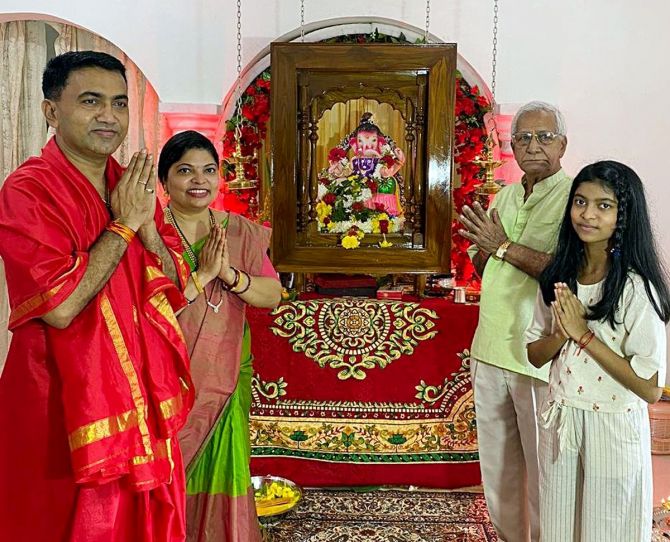 The Tamil Nadu government had earlier banned installation of large Ganesha idols in public places in the state besides public worship and processions before the immersion of the idols in water bodies.

In Kolkata, several community puja organisers switched to the digital mode to enable people have 'darshan' of idols on Ganesh Chaturthi. Organisers of the Bidhannagar Ganesh Chaturthi Mahotsav, one of the oldest community puja in the city, enabled digital 'darshan' of the idol due to the COVID-19 situation, Anindya Chatterjee, a puja committee office-bearer, said. In a departure from the past, Ganesh Chaturthi festival was celebrated without the usual pomp and fanfare across Odisha on Saturday because of the COVID-19 pandemic.

People observed the Ganesh puja only at home as the administration denied permission for holding community puja in pandals in public places to contain the spread of the disease. 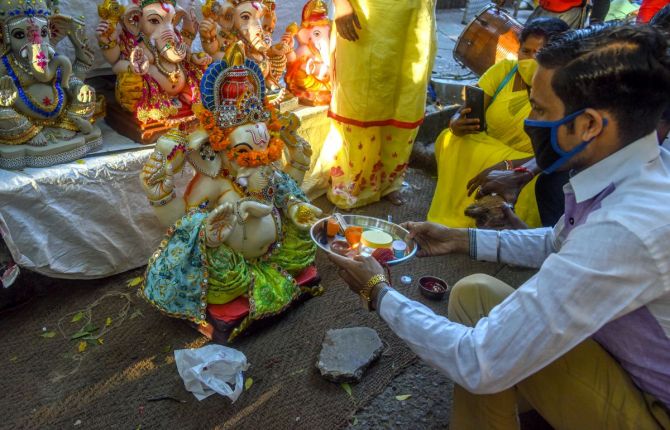 Ganesh Chaturthi was celebrated this year without pomp across Telangana and Andhra Pradesh as was advised by the state government due to the COVID-19 pandemic.

People performed pujas in their homes, not in public as has been practice for years.