Rescue work has intensified in Texas with officials launching search operations and saving people stuck in the receding floodwaters in the aftermath of Hurricane Harvey, one of the most destructive storms in American history that claimed at least 47 lives. 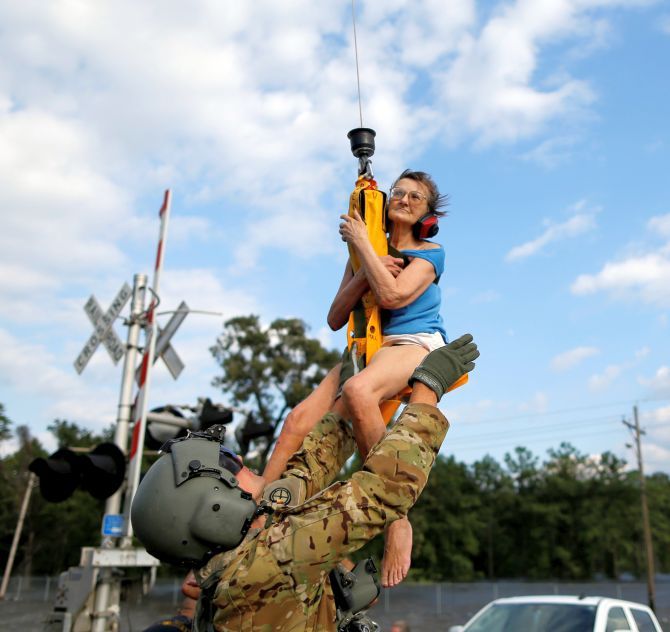 IMAGE: Rescue personnel help Hersey Kirk as she is airlifted into a rescue helicopter after being rescued from her home flooded by Tropical Storm Harvey in Rose City, Texas. Photograph: Jonathan Bachman/Reuters

Nearly a week after Hurricane Harvey slammed into the Texas coast, desperate residents remain stranded without food and water in the wake of unprecedented flooding.

Authorities are searching for survivors and have made helicopter rescues from rooftops as the death toll from Harvey climbed to at least 47.

Thousands of emergency rescue teams officials are helping people affected by the deluge.

The officials are assessing the storm’s trail of destruction in Houston as the flood waters slowly started to recede in south-eastern Texas.

Brazoria County officials have warned that roughly 517 km of the county will be inundated with water from the Brazos River, which is projected to continue rising.

On Thursday, the Houston Fire Department had received 800 service calls, but only 22 were water-related, a spokesperson said. 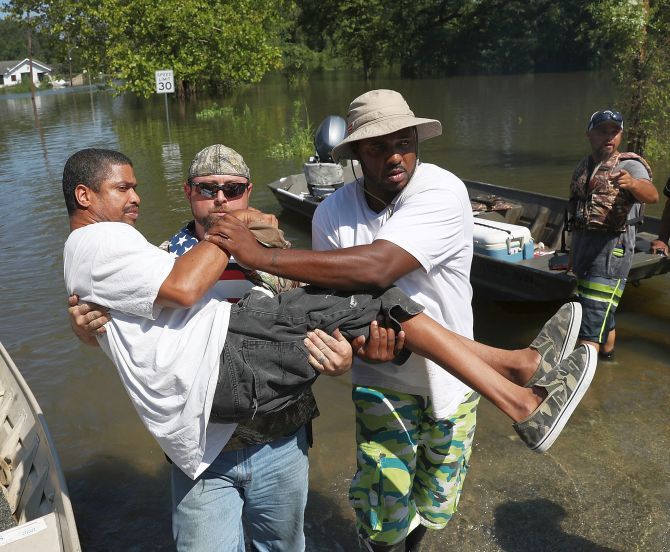 IMAGE: Quintin Sanders is carried to dry land by volunteer rescuers after his neighbourhood was inundated with the flooding of Hurricane Harvey in Beaumont, Texas. Photograph:  Joe Raedle/Getty Images

Beaumont city in south-eastern Texas, home to more than 118,000 people, 145-km away from Houston, woke up without drinking water supply on Thursday.

The Baptist Hospital in Beaumont city is evacuating patients and shutting down emergency services because the city is without a working water supply.

“Due to the failure of the city’s water pump, it is in the best interest of our current patients to transfer to other acute care facilities,” Baptist Hospitals of Southeast Texas
said in a statement on Thursday.

“Due to the city-wide lack of services, we have no other alternative but to discontinue all services which will include emergency services. This is being done immediately. The hospital needs about 50,000 gallons of water a day to run,” hospital medical director Ali Osman said.

The death toll and the number of people who were homeless by the storm continues to grow. 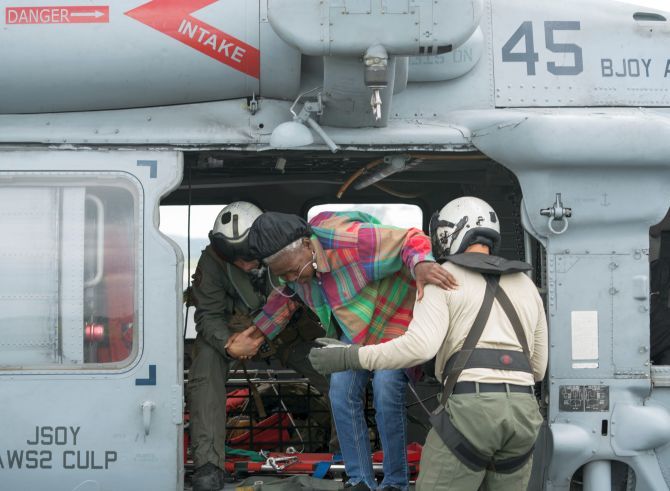 In Harvey’s aftermath, authorities confronted crises on several fronts. The remnants of Hurricane Harvey carried its wrath up the Mississippi Delta on Thursday, but not before hammering the Gulf Coast with more punishing cloudbursts and growing threats that included reports of “pops” and “chemical reactions” at a crippled chemical plant and the collapse of the drinking water system in a Texas city.

In Crosby, Texas, about 48 km northeast of Houston, alarming reports emerged about the danger posed by a chemical plant after the French company operating the facility said explosions were possible.

A fire official on Friday said authorities are monitoring a flooded chemical plant near Houston after a blaze caused by an explosion was put out.

The Neches River in east Texas surged far beyond its banks, into streets, houses and businesses in the city of almost 120,000 people 112 km east-northeast of Houston, reaching six feet above the previous record by afternoon, the National Weather Service reported.

This city of nearly 120,000 residents sits near the Texas Gulf Coast about 48 km west of the Louisiana border.

The police department said it has to wait until water levels recede before it can determine the extent of the damage and make any needed repairs. 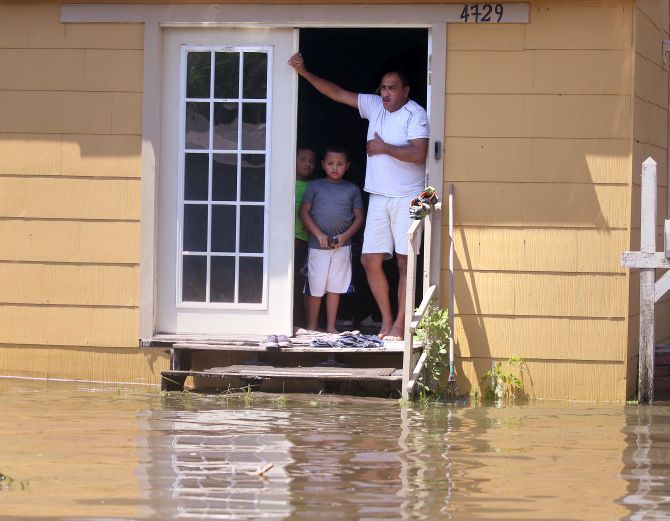 IMAGE: A family stand in the door of their flooded house in Port Arthur, Texas. Photograph: Carlo Allegri/Reuters

Meanwhile, Houston officials ordered mandatory evacuation of areas around the Barker Reservoir, as flooding from that basin, and the nearby Addicks Reservoir, continued to pour into neighbourhoods on the city’s western edge.

In other parts of the city, floodwaters receded, exposing countless losses and new hazards, like ruined and abandoned vehicles blocking roads, damaged electrical systems, and mould.

As residents of the region tried to assess the damage and some returned to their homes, weather forecasters said more rain are expected early next week.

The White House said President Donald Trump will donate $1 million of his personal money for flood relief operations in Texas and Louisiana.

Vice President Mike Pence met with people reeling under the rampage caused by Hurricane Harvey in Texas and promised them of full support by his government until the state is back on its feet. 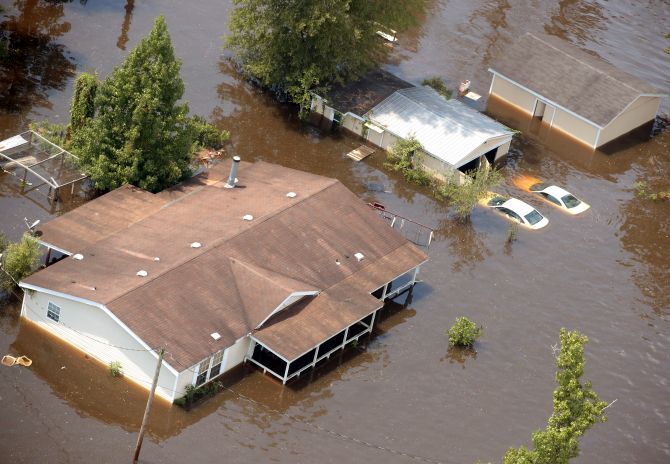 IMAGE: A home is surrounded by floodwater after torrential rains pounded Southeast Texas following Hurricane and Tropical Storm Harvey. Harvey, which made landfall north of Corpus Christi August 25, has dumped nearly 50 inches of rain in and around areas Houston. Photograph: Scott Olson/Getty Images

Tom Bossert, the White House official who is spearheading the administration’s storm response, estimated that 100,000 houses in Texas and Louisiana have been damaged or destroyed, and said Trump will seek billions in aid in the coming weeks.

More than 30,000 people remained in shelters in the region.

Houston fire officials said they would begin going door-to-door in search for victims, a process that could take up to two weeks.

“The shelter mission is the biggest battle that we have right now,” said Brock Long, the administrator of the Federal Emergency Management Agency.

FEMA reported that 95,745 people in Texas had been approved for emergency assistance, including rent, repairs and lost property. The agency has so far paid out about $57 million. 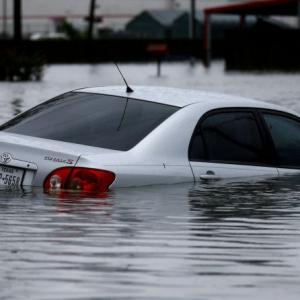