Officials said incident at the popular tourist site didn’t appear to be linked to terrorism, and the suspected driver had prior convictions for drunk driving. 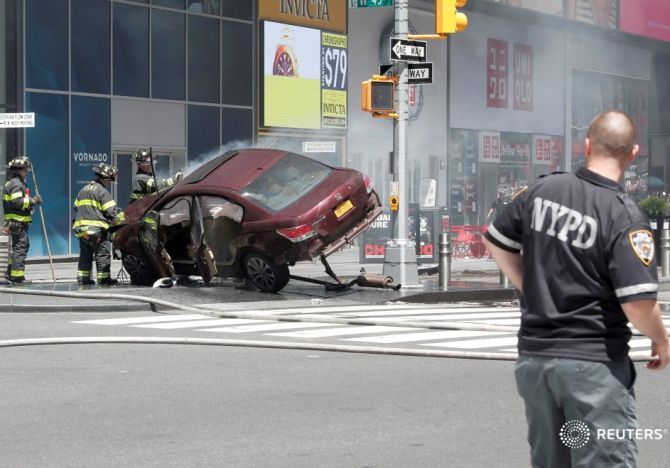 IMAGE: The speeding vehicle has struck at least 20 pedestrians on a sidewalk in New York City's Times Square, killing one person and seriously injuring another four. The driver was arrested. Photograph: Mike Segar/Reuters

One person died and 22 others injured when a car ploughed into pedestrians in New York’s busy Times Square on Thursday, with authorities saying the driver of the vehicle, a US Navy veteran, has a criminal history and record of drunk driving.

Authorities identified the driver of the vehicle as 26-year-old Bronx resident Richard Rojas, who was immediately taken into custody.

New York City Mayor Bill de Blasio stressed that there was no indication the incident was an act of terror. He told reporters at the scene that Rojas is a US citizen and a former member of the armed forces with the US Navy.

“He has a criminal history,” the mayor said. IMAGE: An injured woman is seen at a crosswalk in Times Square after a speeding vehicle struck pedestrians. Photograph: Mike Segar/Reuters

He said that out of an “abundance of caution”, security across key locations around the city will be stepped up and major sites in the city will get additional police coverage from the anti-terror units.

Describing the incident as “horrible”, de Blasio said, “It is a tough day for New York City but as usual the people of New York City will stand firm and will be resilient.”

The incident that occurred left one woman dead and 22 others injured, who were rushed to local area hospitals. Four of them remain in critical condition, suffering from various traumatic injuries, including open fractures. However none of the four seem to have life-threatening injuries, authorities said. 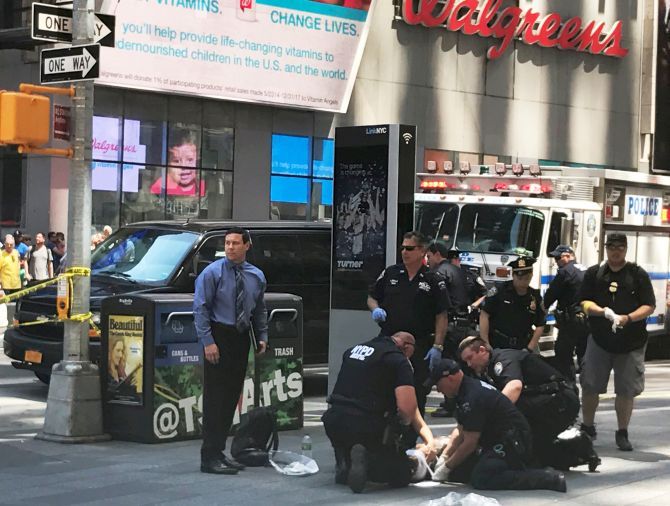 New York Police Commissioner James O’Neill said preliminary information revealed that Rojas had been arrested in the past and two of those arrests were due to driving while intoxicated. Detectives are currently reviewing any other criminal history Rojas may have.

The Police chief said Rojas was driving his Honda car at a “high rate of speed” around noon along the sidewalk through three streets, hitting pedestrians along the way before coming to a stop after colliding with metal railings at a street corner. IMAGE: Victims sprawled on the sidewalk were being tended to by first responders and other pedestrians. Photograph: Mike Segar/Reuters

Smoke was coming out of the car’s hood and the vehicle was slightly overturned on a barrier at a sidewalk in Times Square. O’Neill reiterated that there is no indication that the incident is “terror related”.

The incident occurred around lunchtime at the crowded Times Square in the heart of Manhattan and among the most popular tourist destinations in the world. IMAGE: A number of injured people were being placed on stretchers to be treated. Photograph: Jeremy Schultz/Reuters

At any given point, hundreds of thousands of people are in Times Square, including tourists, city residents, commuters and employees. Apart from a plethora of stores, broadway theatres and high-rises, Times Square is also home to offices of several financial, entertainment and media firms.

It also has a very busy subway station that offers connectivity to millions of commuters to other areas of the city.

Emergency response crews, including ambulances and fire trucks, were on the scene, which had been cordoned off. The bomb squad also arrived at the site of the accident. With peak tourist season beginning in New York with the advent of summers, the already crowded Times Square will see hundreds of thousands of visitors from all across the world.

White House Press Secretary Sean Spicer said US President Donald Trump “has been made aware” of the incident. Trump “will continue to receive updates”, Spicer tweeted. 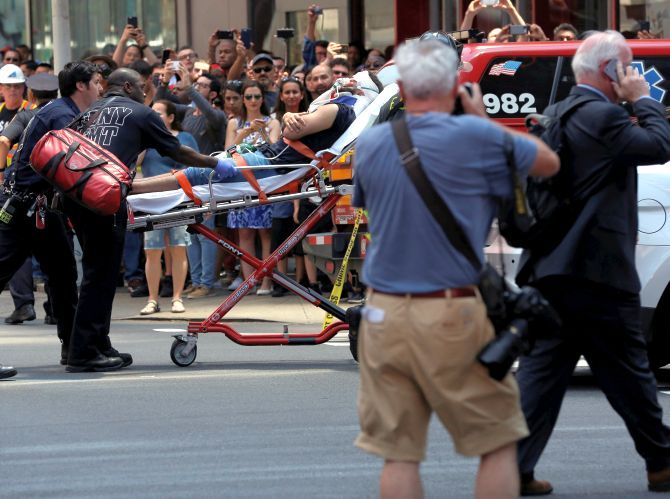 The incident brought to mind similar ones across the world, including the terror attack in Nice, France when a large truck ploughed through a Bastille Day crowd last year killing over 70 people. In December, a truck had ploughed into a Christmas market in Berlin, killing 12 people and injuring about 50.

In 2010, Times Square was the target of an attempted car bombing. Pakistan-born Faisal Shahzad was arrested and charged with carrying out the failed terror plot. 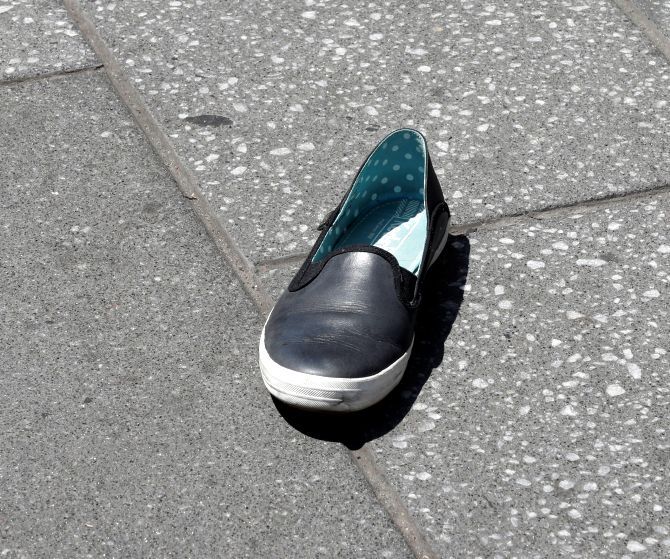 Witnesses to the deadly car crash in the heart of Times Square said the speeding “madman” driver ploughed into a throng of people before ditching the smashed car and physically trying to attack people, including a cop.

Nashville, Tennessee tourist Michael Rickerby, 24, who was in the Big Apple with a group of pals said mass panic ensued when the driver started speeding on the sidewalk.

“He was going faster and faster on the sidewalk when he was hitting people. It looked like he was trying to hit people,” Rickerby told The Post, adding that the masses started running away from Times Square screaming.

Rita Baidoo, a ticket agent for the Big Bus tour company, who spotted car zooming along West 45th Street, said, “He was speeding really fast and we knew he was out of control.”

“We saw him coming right at us. We ran to the side, we ran and the tourists ran. He smashed into the pole and, boom, straight away the car went on fire,” Baidoo said.