Two more Congress MLAs resigned on Wednesday in another jolt to the beleaguered Congress-Janata Dal-Secular coalition government in Karnataka whose survival played out in three cities amid high drama in Mumbai where police detained minister D K Shivakumar on a mission to woo back a dozen rebels holed up in a luxury hotel. 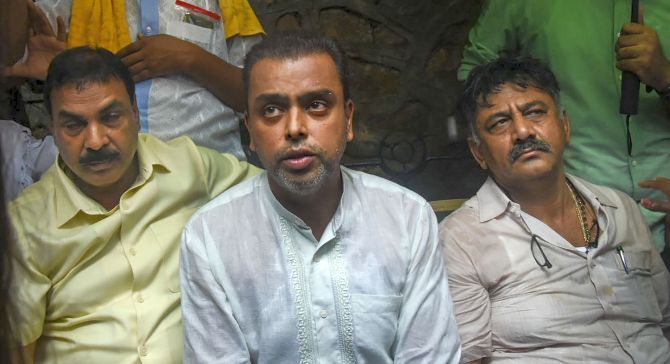 Housing minister M T B Nagaraj and K Sudhakar tendered their resignation to Assembly Speaker Ramesh Kumar, as the political crisis reached the Supreme Court where 10 rebel Congress and JD-S MLAs moved a petition alleging that the Speaker was deliberately not accepting their resignations that gave a breather to the Kumaraswamy government.

With the two latest resignations, 16 MLAs -- 13 from the Congress and 3 from the JD-S -- have quit while two Independent MLAs -- H Nagesh and R Shanker -- have already withdrawn support.

With the support of the two independents, who on Monday resigned from the ministry, the Bharatiya Janata Party has 107 MLAs in the 224-member House, where the half-way mark is 113. 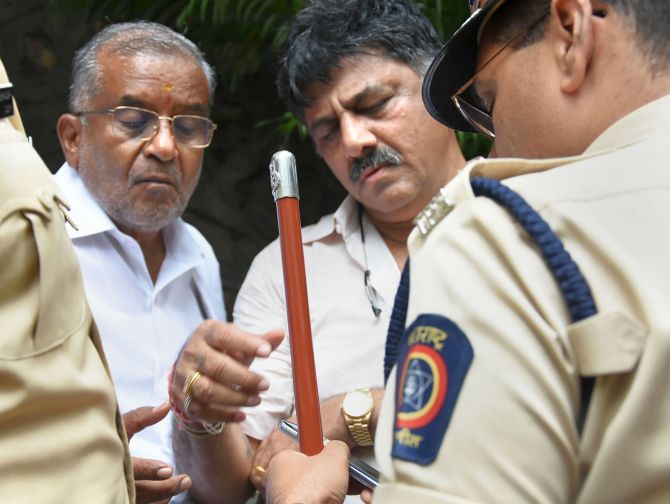 As the political turmoil disrupted proceedings in the Rajya Sabha for the third day amid uproar by opposition Congress members, the Karnataka unit of BJP demonstrated outside the Vidhana Soudha in Bengaluru to press for Chief Minister H D Kumaraswamy's resignation claiming his government has lost majority.

But it was the mission of Congress's troubleshooter Shivakumar to Mumbai with the aim of meeting the rebel MLAs and woo them back to the Congress fold that became the focus of the fast paced developments during the day. The BJP is in power in Maharashtra.

Shivakumar and his Congress colleagues Milind Deora and Naseem Khan were picked up outside Renaissance Hotel in Powai and taken to the Bandra-Kurla Complex police guesthouse where they were in custody for several hours.

Shivakumar was later released and sent packing back to Bengaluru, Deora said, adding he and Khan were also released.

"Police are taking Shivakumar to the (Mumbai) airport. He is being forcibly sent back to Bengaluru," Deora tweeted. 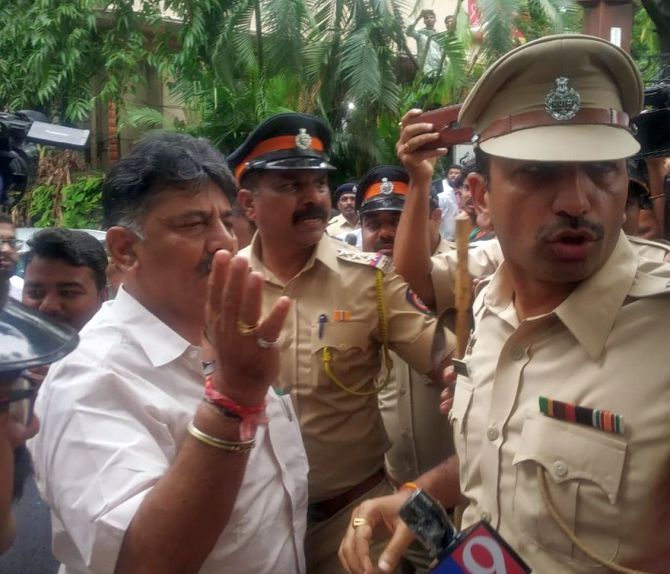 The Karnataka minister had been camping outside the hotel since morning, determined to meet the rebel MPs in a desperate bid to pull the Congress-JD-S government from the brink of collapse.

Security personnel, camera crews, media personnel and political workers jostled with each other outside the luxury hotel that has become the centrepiece of the crisis in Karnataka. Slogans of "Shivakumar go back" were raised and some people clambered on to the high gates of the hotel on the outskirts of the city.

Shivakumar was being interviewed by a TV channel when he was almost pulled away by Mumbai Police and detained .

Shivakumar had reached the hotel at 8.20 am but was stopped by police from entering. His plea that he had a valid reservation in the hotel fell on deaf ears.

Officials, it is learnt, told Shivakumar the rebel legislators had written to the Mumbai police chief that they feared a threat to their lives due to his arrival. 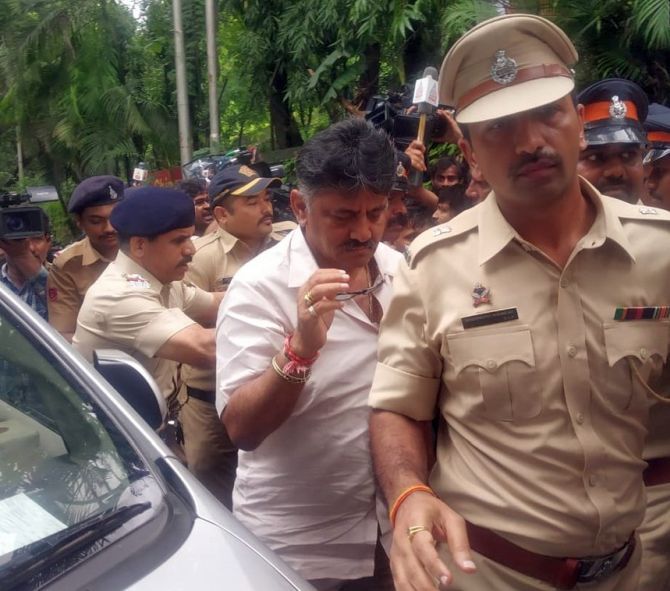 IMAGE: Shivakumar said he will not leave without meeting the MLAs. Photograph: ANI

But Shivakumar, who was accompanied by senior JD-S MLAs, stood his ground, saying that politics is an art of the possibility and he would not leave without meeting friends.

He told reporters he had "come in peace" and had no intention of threatening the rebel MLAs.

As the showdown intensified, an e-mail from the hotel to the travel agency which had booked a room on Shivakumar's behalf revealed that the reservation was cancelled due to "some emergency".

Ten of the 12 MLAs in the hotel have written to Mumbai Police, saying they feared a threat to their lives and Shivakumar should be prevented from entering the hotel.

"We have received a letter from the rebel MLAs," a senior police official said.

Mumbai Police has imposed prohibitory orders near the hotel where the rebel Congress and JD-SMLAs from Karnataka are staying, an official said.

The entire stretch leading to the hotel was lined with security personnel and security had been stepped up since morning. 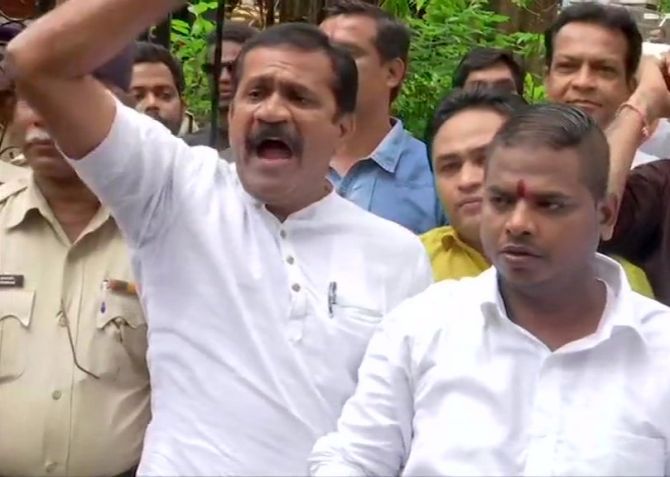 IMAGE: Supporters of rebel MLAs gathered outside the hotel in Powai and seen shouting "Shivakumar go back". Photograph: ANI

After standing for several hours with supporters holding aloft umbrellas, Shivakumar managed to sit precariously on the hotel boundary wall with his feet dangling over a storm water drainage opening.

They handed over their resignations at the Speaker's chamber in Vidhana Soudha, the State secretariat.
After tendering his resignation, Nagaraj told reporters he was "fed up" with politics and wished to retire from public life.

"I don't want any ministerial position or anything. I am fed up with politics," Nagaraj said.

Nagaraj and Sudhakar, who is State Pollution Control Board Chairman, came to the Speaker's office at about 4 pm and handed over resignation in their official letterhead to him. 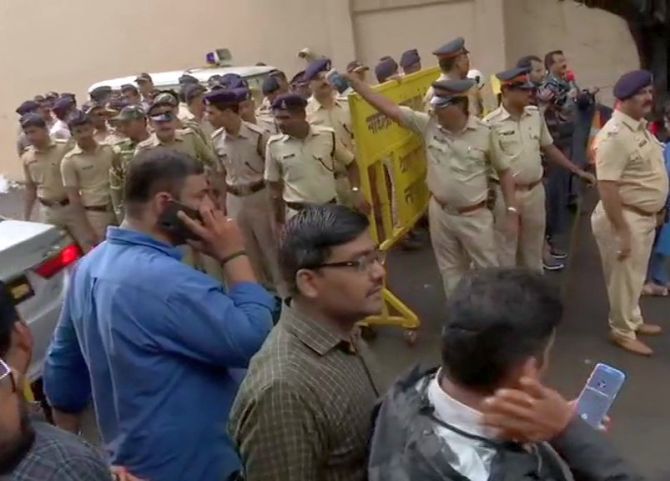 A bench of Supreme Court headed by Chief Justice Ranjan Gogoi took note of the submission of senior advocate Mukul Rohatgi, appearing for the rebel MLAs, and assured him that it will see whether their petition can be listed for an urgent hearing on Thursday. 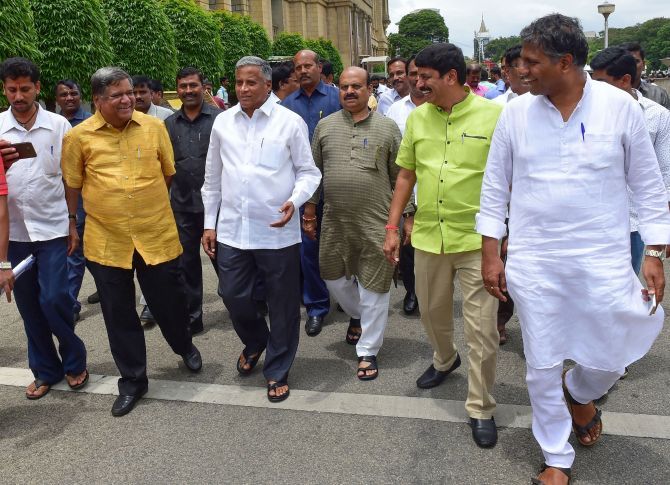 He sought the hearing either on Wednesday or Thursday on the plea in which it has been alleged that the Speaker had acted in a partisan and mala fide manner and deliberately not accepting their resignations.

In the petition, the 10 rebel MLAs alleged that the Speaker was protecting the government which is in minority now.