Rains in the northern states took at least 38 lives, triggering landslides that stranded hundreds of people in Uttarakhand and Himachal Pradesh and left several areas in Punjab, Haryana and Jammu flooded. Indian Air Force helicopters carried dramatic rescue operations in Jammu and Karnal districts on Monday, and the administration was on alert in parts of Haryana and Punjab.

Although the rainfall had subsided across the region on Monday, rivers in several parts of the region were in spate on Monday.

The water level rose above the danger mark in Haridwar and Delhi and the level at Bhakra dam was a foot above the permissible mark.

Three more people were reported dead in Himachal Pradesh where heavy rains over the weekend have caused floods and landslides, increasing the toll to 25.

In neighbouring Uttarakhand, the toll climbed to 12 with two more bodies being recovered on Monday. Cloudbursts have wreaked havoc in a dozen villages of Uttarkashi district, washing away houses and hectares of agricultural land.

A 16-year-old boy drowned in Uttar Pradesh's Etawah due to release of water from Kota Barrage into the Chambal. 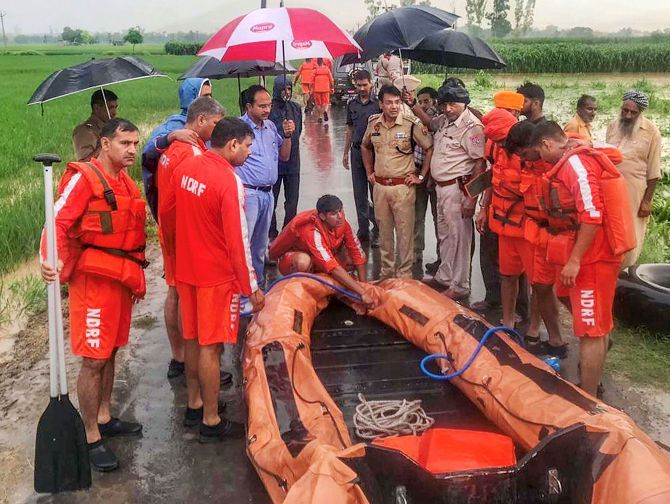 The situation in parts of Punjab and Haryana remained grim, prompting the Punjab government to declare the current flood situation in the affected villages of the state a natural calamity.

The Kailash Mansarovar Yatra through traditional Lipulekh route was halted due to landslides on the trek route. According to Pithoragarh District Magistrate V K Jogdande, the 17th batch with 56 pilgrims was called back to the Dharchula base camp for safety reasons.

Most rivers in Uttarakhand were in spate, with the Ganga crossing the danger mark in Haridwar and flowing close to it in Rishikesh.

Two bodies were recovered this evening from Makudi as search operations were intensified on Monday with the weather being clearer, Uttarkashi Disaster Management Officer Devendra Patwal said, adding five were still missing. All bodies except one have been identified, he said.

So far six bodies have been pulled from the rubble in Makudi, four from Arakot and one each from Tikochi and Sanel. Sixty head of cattle have also been killed in the cloudbursts in Mori block.

Three helicopters, including one from the IAF, were pressed into service to take relief material including food packets, rations and essential medicines to people.

With the Met department predicting heavy rainfall in parts of the state on Monday, all schools and anganwadi centres in nine of 13 districts remained closed. 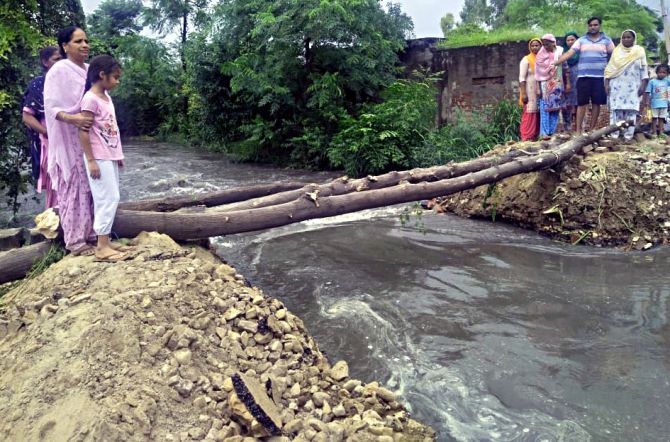 In Himachal Pradesh, over 500 people were stranded as several roads were blocked by landslides and flash floods, officials said. The rains have so far caused damage adding up to Rs 574 crore, according to a state government spokesperson.

The incessant rainfall for the last two days damaged water pipes and hit supplies in Kangra district, another official said on Monday.

Over 10,000 people were evacuated from low-lying areas in Delhi as the water level in the Yamuna river crossed the danger mark.

According to a Delhi government official, the river was flowing at 205.36 metres, just above the danger mark of 205.33 metres.

The official said that the water level is expected to rise further as Haryana released 1.43 lakh cusec water at 6 pm on Monday.

The Yamuna flows through six districts of Delhi whose low-lying areas are prone to flooding. The administration has deployed 30 boats to prevent accidental drowning.

A flood-like situation prevailed in many parts of Punjab and Haryana, where the IAF rescued nine people from flooded areas.

Many parts were inundated and crops in hundreds of acres were submerged as both the states continued to remain on high alert.

Nearly 1,000 people, including about 700 from Rupnagar district alone who were left stranded in flood waters, were rescued in the two states, officials said.

The Army, the National Disaster Response Force and state authorities were carrying out rescue operations in various areas of Punjab and Haryana, a defence release said.

In Jammu, an Indian Air Force (IAF) helicopter rescued four fishermen who were stuck in swollen waters of the Tawi river, officials said.

They were stranded on a concrete platform at the bottom of a pillar of an under-construction structure to create a lake at Baghwati Nagar, they said.

The air force was called after state disaster response force and police personnel failed to reach the fishermen, the officials said.

Several rivers including the Ganga, Yamuna and Ghaghra were in spate in Uttar Pradesh due to heavy rains in neighbouring states, leading to floods in low-lying areas that left one person dead.

Due to rains, 6,000 cusecs of water was released from the Bisalpur dam in Tonk on Monday as it reached its capacity of 315.05 metres.