Heavy rains lashed several parts of Delhi-NCR through the night with waterlogging disrupting road traffic movement at many places in the national capital and Gurgaon. Rush hour traffic was thrown out of gear in Haryana's Gurgaon as morning commuters got stuck in traffic snarls, including an over five-kilometer jam on a road between Hero Honda Chowk and Khirki Daula Toll Plaza.

Office-goers in Delhi, too, faced a lot of inconvenience due to traffic disruptions with most opting to use the Delhi Metro rail's services, which were delayed due to over-crowding.

Classes in several colleges in Delhi were also cancelled.

The meteorological department has forecast more rains through the day and relative humidity at 100 per cent in Delhi. 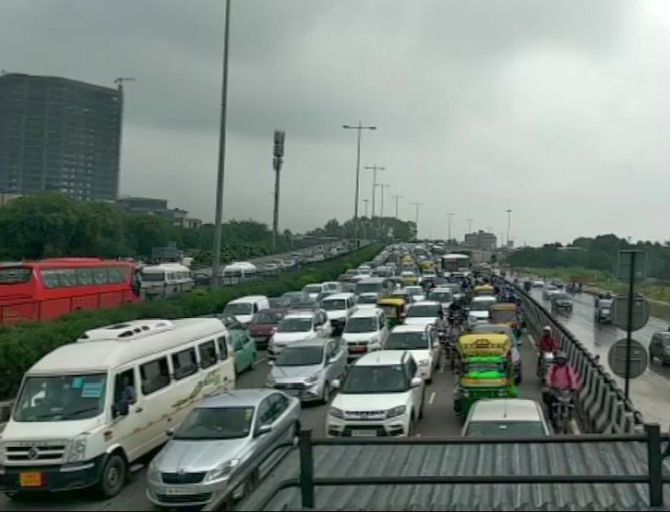 Heavy rains were recorded in central and eastern parts of Delhi with water-logging and traffic congestion being reported from areas such as Mayur Vihar, Palam, Duala Kuan, Bhairon Enclave in Punjabi Bagh, Moti Nagar flyover and between Mundka and Rajdhani Park.

Traffic was affected near Narela Mandi due to an uprooted tree.

Waterlogging was also reported from Devli, Vayusenabad, Sangam Vihar, at GTK towards Mahendra Park, Inderlok Chowk towards Zakhira near underpass, Rao Tula Ram Marg, on Rama Road and at the roundabout between Windsor place and Dr Rajendra Prasad Road. "I waited for 45 minutes for the metro. This is not right. At least during peak hours the frequency should be improved," Sunita Kumar, a Delhi University student travelling by the metro's Blue Line said.

"@mlkhattar mantra of Gurgaon to Gurugram name change didn't work. The state of affairs in the Cyber city remains the same," a resident tweeted.

"Due to the situation, I was trapped for at least three hours in a jam and had to go back home. My son skipped school and I office today," Raman Malhotra, a resident of DLF said. IMAGE: Office-goers in Delhi, too, faced a lot of inconvenience due to traffic disruptions. Photograph: @ChanchalKrJnu/Twitter

"The main reason for the traffic congestion (between Hero Honda Chowk and Khirki Daula) was due to some vehicles breaking down," a Gurugram police officer said.

Teams of the traffic police are on the ground and efforts are on to decongest roads, he said, adding that vehicular movement on major roads was affected due to waterlogging. IMAGE: The meteorological department has forecast more rains through the day and relative humidity at 100 per cent in Delhi. Photograph: @pathaniasunil12/Twitter