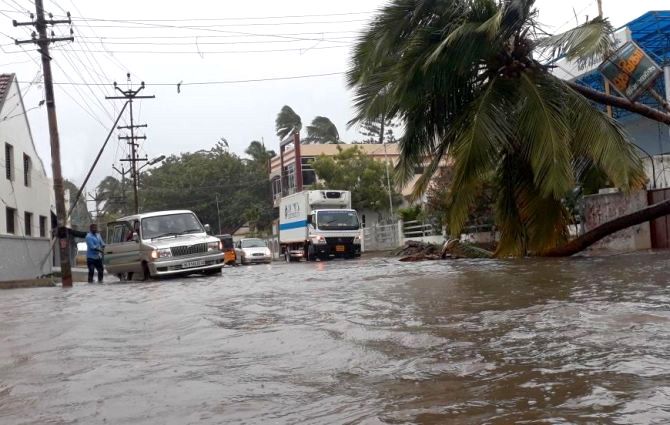 IMAGE: Chennai has already received up to 6 cm of rain between 8:30 on Wednesday night and 8:30 on Thursday morning. Photograph: ANI/Twitter

Torrential rains pounded southern districts of Tamil Nadu and neighbouring Kerala crippling life and claiming eight lives -- four each in the two states -- as a deep depression in the Bay of Bengal intensified into cyclonic storm 'Ockhi' on Thursday.

Both the state governments put the official machinery on high alert as the cyclone, lying 60 kms south of Kanyakumari, was forecast to dump more rains in south Tamil Nadu and Kerala in the next 24 hours.

The storm was expected to move toward the Lakshadweep archipelago and hit the islands on December 2. 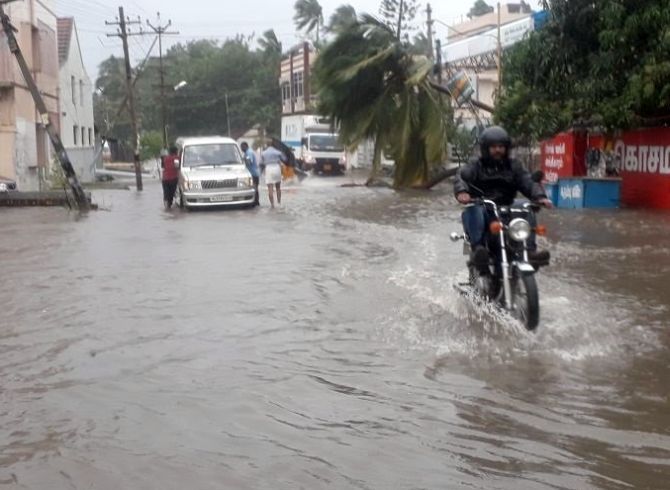 IMAGE: Fishermen in coastal regions in southern parts of the two states were advised not to venture into sea for the next 24 hours. Photograph: ANI/Twitter

A bulletin issued by the India Meteorological Department said gale wind speed reaching 65-75 kmph gusting to 85 kmph was very likely along and off South Kerala during next 48 hours and along and off south Tamil Nadu during next 24 hours.

Fishermen in coastal regions in southern parts of the two states were advised not to venture into sea for the next 24 hours, it said.

Madhavan Rajeevan, Secretary in the Earth Sciences ministry, said in New Delhi that Lakshadweep in the southern part of the Arabian Sea will start experiencing heavy rainfall and strong winds from on Friday.

"It will hit the islands on December 2," Rajeevan said.

It asked officials to shelter people living in low lying areas in the southern districts in multi-purpose evacuation centres. 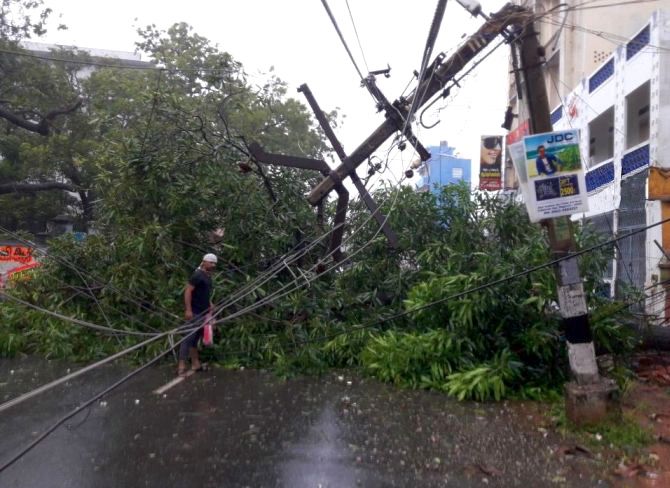 IMAGE: Authorities have asked people to remain doors as a cyclone alert has also been sounded.
Photograph: ANI/Twitter

Also, electricity personnel with necessary equipment have been rushed to restore power distribution that was affected due to trees falling over electric poles, Palaniswami said.

Minister for Revenue and Disaster Management R B Udhaya Kumar, deputed to Kanyakumari to take up relief work on a war footing, said people in the affected areas have been shifted to safer places.

He said nearly 3,000 electric poles have been uprooted in the district, affecting power supply.

Besides Kanyakumari, Tuticorin and Tirunelveli districts were among those battered by the rains.

Three men and a woman were killed when trees fell on them in different areas in Kanyakumari district, officials said. 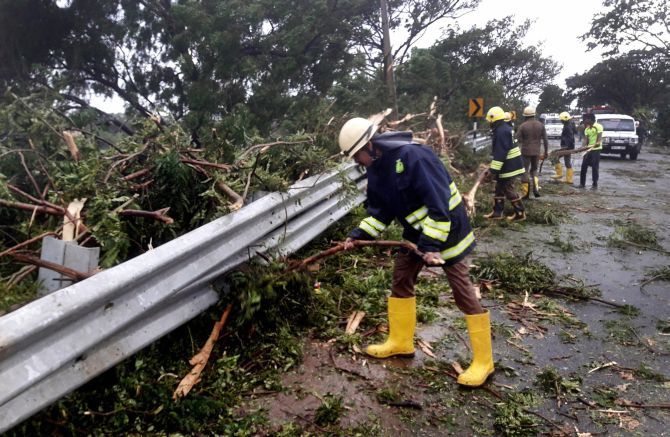 IMAGE:  Fire Service personnel removing a huge trunk of a tree that fell during a storm at Nagercoil in Kanyakumari district on Thursday. Photograph: PTI Photo

In Kerala, the state government put the official machinery on a high alert and ordered evacuation of people living within 100 metres from the coast and also sought help from the Navy, Coast Guard and the Air Force to assist people in distress.

The state reported four rain related deaths, including an elderly couple who were electrocuted when they came into contact with a snapped live wire in front of their house at Kattakada near Thiruvananthapuram.

The rains accompanied by gusty winds left a trail of destruction in Kanyakumari district, in the southern most tip of the country, uprooting more than 500 trees, State Disaster Management Agency said.

'Do not come out of homes in Kanyakumari, Tuticorin, and Tirunelveli stay safe indoors and take precautions do not panic,' it said in a tweet. 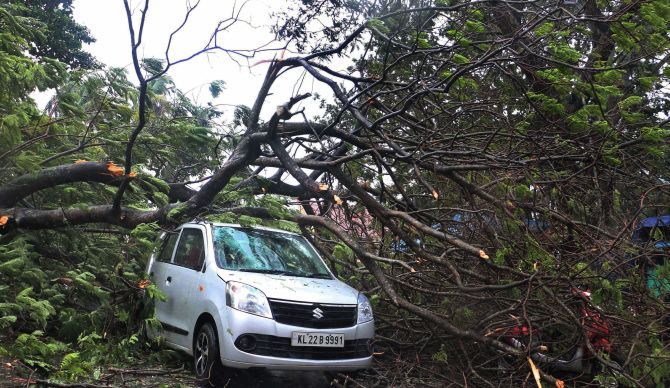 IMAGE: A car damaged as uprooted trees fall over it due to heavy rain and strong winds, in Thiruvananthapuram on Thursday. Photograph: PTI Photo

Southern Railway said it has partially cancelled some trains in Tirunelveli-Kanyakumari-Thiruvananthapuram sector.

Due to bad weather, a scheduled two-day programme of Congress Vice President Rahul Gandhi, which was to begin on Friday in Kerala, has been cancelled, party sources said.

Thiruvananthapuram and its coastal stretch were witnessing heavy rains accompanied by strong winds since Thursday morning. In several places, electric posts got uprooted. 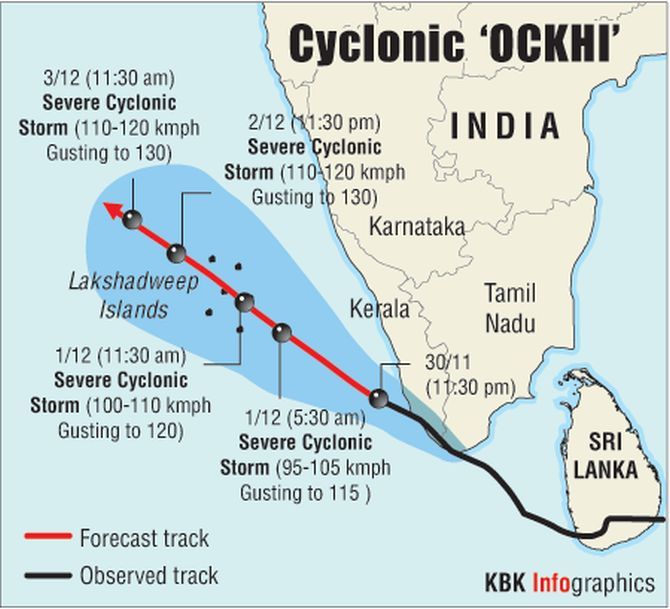 Vizhinjam coastal police said they received information that at least 57 fishermen, who had put out to sea from Thumba to Pozhiyur since yesterday, were yet to return. 29 traditional boats which had set out from Poonthura were also out in the sea, police said.

A Kochi report said Navy deployed four ships and two aircraft to assist in the search and rescue of fishermen on board six boats and a marine Engineering vessel reported to be missing in the sea near Vizhinjam.

The Southern Naval Command was also gearing up for any humanitarian assistance and disaster relief that may be required in view of the cyclone in the southern parts of Kerala, a Defence release said. 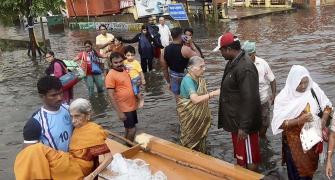 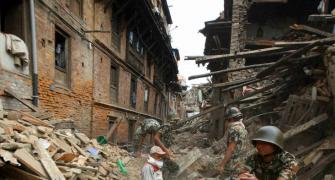