Monsoon fury throws life out of gear in Hyderabad

Hyderabad on Wednesday witnessed monsoon fury that inundated roads, flooded houses, toppled and swept away vehicles and left 19 people dead, as unprecedented rains lashed the capital city, besides some other districts in Telangana. The rains showed no signs of abating in neighbouring Andhra Pradesh, even as Prime Minister Narendra Modi assured all possible help to the two Telugu-speaking states.

For October, the Begumpet met office observatory in Hyderabad recorded the highest ever rainfall of 192.1 mm on Wednesday.

In AP, for the second time in less than 20 days, the river Krishna remained swollen on Wednesday as it received heavy flood due to rainfall over the last couple of days. IMAGE: Rescue operation being carried out for locals to move them to safer places following heavy rain, at Al Jubail colony in Hyderabad. Photograph: PTI Photo

Parts of Telangana, mainly Hyderabad, bore the brunt of the monsoon, even as Nalgonda and Yadadri districts too suffered.

At least 19 people were killed since Tuesday night in different areas in wall and house collapse incidents due to the heavy downpour, officials said.

The victims included a toddler.

Under the Cyberabad Police Commissionerate limits, five people went missing after they were washed away in high flow of water, police said, adding, a search was on. IMAGE: Rescue operation being carried out for locals to move them to safer places following heavy rain. Photograph: PTI Photo

In Banjara Hills a 49-year-old man, running a naturopathy clinic, was electrocuted when he was trying to remove water from the cellar of his inundated apartment.

TV channels showed visuals of a man being washed away and residents climbing the terrace of their houses seeking help.

He was later rescued by police and locals.

The state government declared a holiday for all government offices and private institutions on Wednesday and Thursday, even as people were advised to stay indoors unless it was an emergency. K T Rama Rao, minister for municipal administration and urban development, held an emergency meeting with senior officials and reviewed the rescue and relief operations in the city.

He said several trees and electricity poles were uprooted due to the deluge and directed the Telangana State Southern Power Distribution Company Limited to coordinate with municipal administration and police departments to ensure that power is restored at the earliest.

On the Vijayawada-Hyderabad Highway, vehicles moved at snail's pace.

Serpentine queues of vehicles were seen on the highway for hours together. 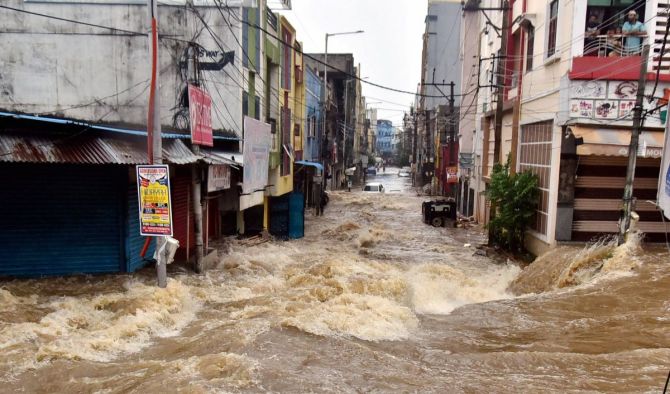 The commuters were advised to take alternate routes while police personnel diverted vehicular movement on the city outskirts.

Due to heavy inflow, 13 gates of Himayath Sagar reservoir were opened on Wednesday morning. Similarly, water from the Hussain Sagar lake was also being discharged after it reached the full tank level of 513.41 metres.

The Nehru Zoological Park was closed on Wednesday and will remain shut on Thursday also for visitors due to inundation in many parts. Union Minister of State for Home Affairs G Kishan Reddy said one National Disaster Response Force team is ready for flood assistance, while two more will be reaching the city to assist in relief efforts across the state.

Police teams and personnel of the Disaster Response Force of GHMC and NDRF evacuated several families fromdifferent localities in Hyderabad.

Army personnel launched flood relief and rescue columns in Bandlaguda area in Hyderabad on a requisition from the state government, a defence release said. IMAGE: A bus damaged after a road caved-in following incessant rainfall across the state, at Gaganpahad-Shamshabad Road near Hyderabad. Photograph: PTI photo

>Many stranded people have been evacuated and showing humanitarian values, a large number of food packets had been distributed.

Army Medical teams accompanying the columns are providing essential first aid and medical relief to the stranded people, it said. In neighbouring Andhra Pradesh, 10 people were killed in rain-related incidents across the state following torrential downpour in the last 48 hours.

The CMO said in a release that 10 people died in rain-related incidents in the state in the last two days.

The CM ordered that ex-gratia be immediately paid to the victims' families. The amount, however, was not specified.

He spoke to District Collectors and SP's via a video link and directed them to remain on high alert as rivers and rivulets were in spate.

He asked them to focus on restoring power supply and repairs to damaged roads on a war-footing. IMAGE: Rescue operation being carried out for locals to move them to safer places following heavy rain, at Singareni Colony in Hyderabad. Photograph: PTI Photo

Meanwhile, Prime Minister Modi spoke to Telangana Chief Minister K Chandrashekar Rao as well as Reddy and assured them of all possible support and assistance from the Centre in rescue-and-relief work.

In a tweet, Modi said, "Spoke to @TelanganaCMO KCR Garu and AP CM @ysjagan Garu regarding the situation in Telangana andAP respectively due to heavy rainfall. Assured all possible support and assistance from the Centre in rescue & relief work. My thoughts are with those affected due to the heavy rains."

In Karnataka, heavy rains for the past three days wreaked havoc in some northern parts of the state, causing inundation, crop loss and damage to houses.

Coastal districts of Dakshina Kannada and Udupi received very heavy rains since Tuesday morning, resulting in water logging in cities and damage to property in the rural areas.