The north and central regions of India seethed under heatwave conditions on Friday forcing people to stay indoors, even as a severe dust storm and lightning in various parts of Uttar Pradesh claimed at least 26 lives and left 57 injured. 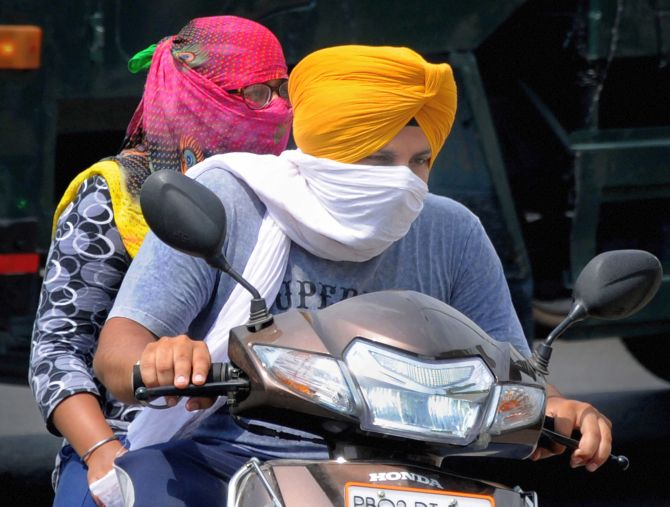 IMAGE: People cover their faces to shield themselves from the heat in Amritsar. Photograph: PTI Photo

The weatherman has warned of heatwave conditions continuing in north and central India next week, and predicted "severe heatwave" in Madhya Pradesh, Uttar Pradesh, Rajasthan and Vidarbha in Maharashtra from Saturday till Tuesday.

On Friday, Hoshangabad in west Madhya Pradesh was the hottest at 46.8 degrees Celsius, while Rajasthan's Churu was close behind at 46.6 degrees Celsius.

However rainfall brought slight respite from the heat in parts of Himachal Pradesh, Uttar Pradesh and some eastern states including, West Bengal Odisha, Bihar and Jharkhand. 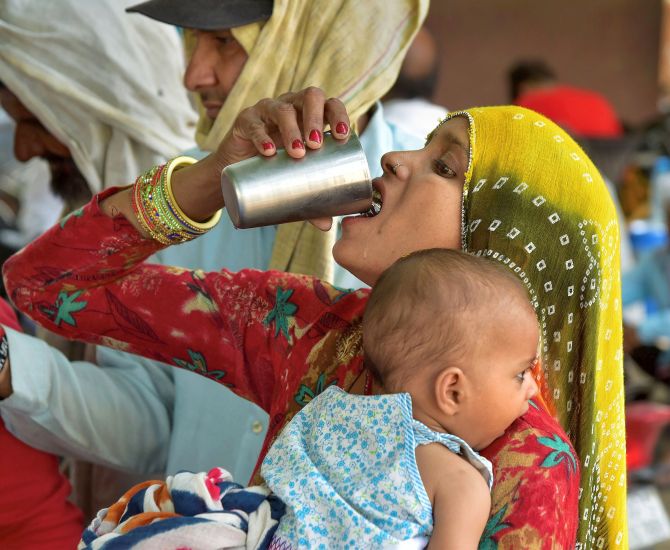 IMAGE: A woman drinks water to quench her thirst on a hot summer day in Bikaner. Photograph: PTI Photo

In the national capital, the mercury dipped marginally due to strong wind activity, gusting up to 20 kilometers per hour, with the city recording a high of 40.5 degrees Celsius, normal for this time of the year.

Light to moderate rains occurred in parts of Uttar Pradesh Friday, where severe dust storm and lightning the previous night claimed six lives in Mainpuri, three each in Etah and Kasganj, two each in Farrukhabad and Barabanki, and one each in Moradabad, Badaun, Pilibhit, Mathura, Kannauj, Sambhal, Ghaziabad, Amroha, Badaun and Mahoba.

Police said most of the injuries occurred when people sleeping inside their mud houses were caught unawares by the thunderstorm, which was accompanied by rain, leading to wall collapse. 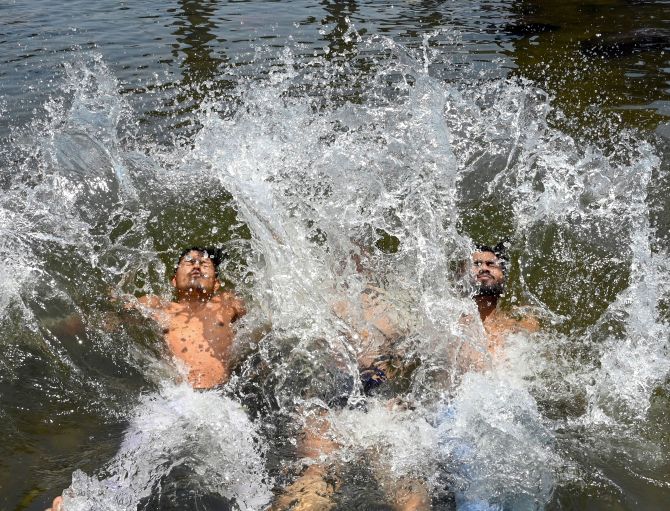 Thirty-one cattle died and 16 houses were also damaged in the incidents, officials said. Massive power cuts were reported from various parts of the state, including Lucknow, as electricity lines got snapped in the gale.

A financial assistance Rs 4 lakh has been announced by the chief minister for the family of the deceased, government spokesperson Shrikant Sharma said.

However Haryana and Punjab continued to experience hot weather conditions in most places, with Bhiwani recording a maximum of 43.1 degrees Celsius. 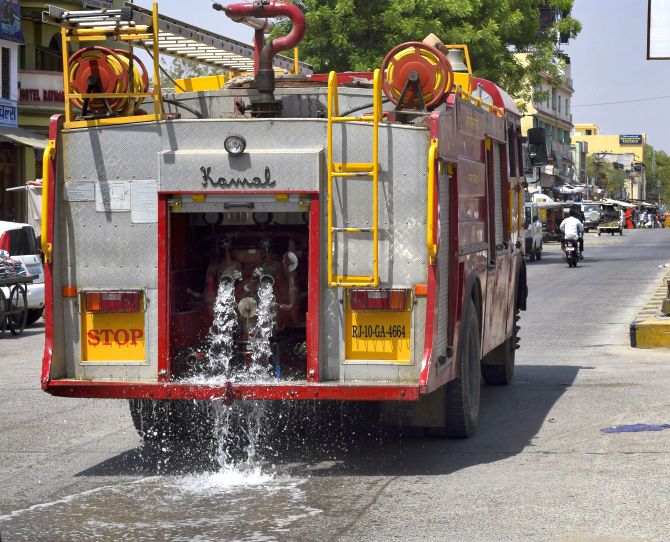 Chandigarh, the joint capital of the two states, recorded a maximum temperature of 40 degrees Celsius, up one notch from normal, while Hisar in Haryana registered a high of 43 degrees Celsius, the meteorological department here.

In Punjab, the holy city of Amritsar experienced a hot day at 41.4 degrees Celsius, one degree above normal, while Ludhiana and Patiala recorded above-normal maximum temperatures of 41 degrees Celsius and 41.2 degrees Celsius respectively. 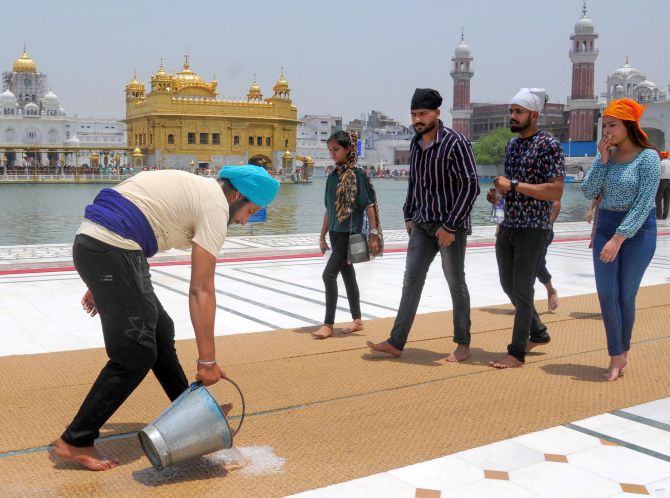 IMAGE: A sewadar drenches the rugs with water at 'parikrama' floor at the Golden Temple in Amritsar. Photograph: PTI Photo

Jammu reeled under heatwave conditions recording a high of 40.3 degrees Celsius, while in the hill state of Himachal Pradesh overnight rains brought the minimum temperature down by one to two degrees.

Light to moderate rainfall occurred at a few places in sub-­Himalayan West Bengal, while one or two places in Odisha, Bihar and Jharkhand witnessed very light rainfall. 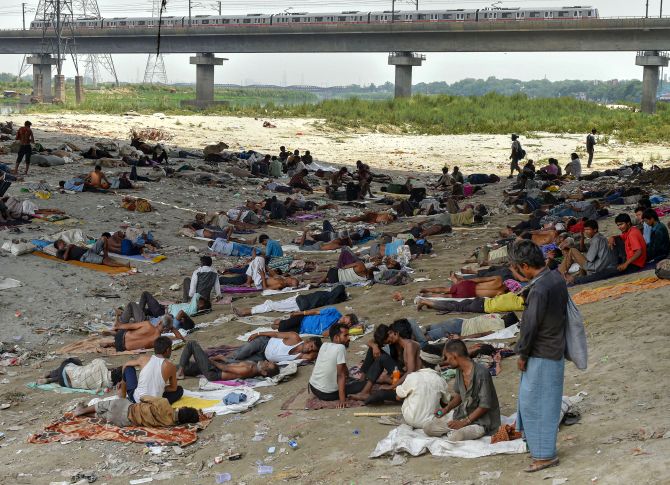 It is likely that the severity of the heat over eastern India could increase. Therefore, the heatwave zone could extend towards interior Odisha, north-coastal Andhra Pradesh, Jharkhand and Bihar during this period, the weather department said.

Parts of south, east and northeast India are expected to get some relief from the blistering heat, with the onset of monsoon expected to take place over Kerala on Saturday.