The royal couple chose a modern touch to their marriage ceremony. 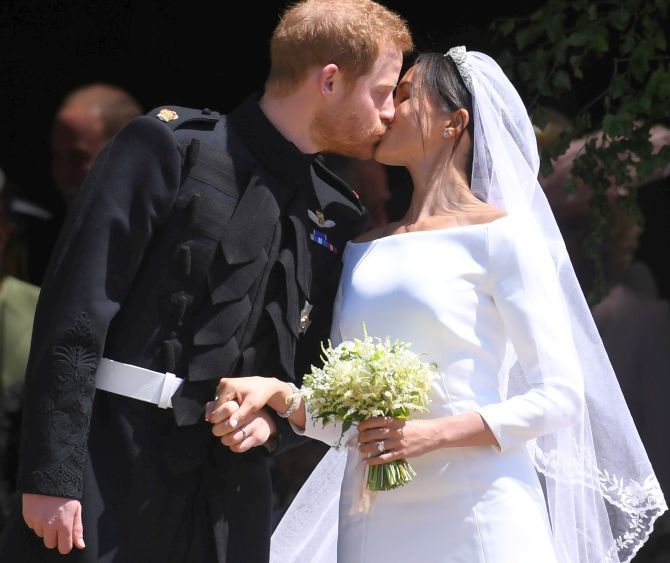 IMAGE: Prince Harry and Meghan's kiss sparked huge cheers from people outside the chapel and the 100,000 watching on the streets of Windsor. Photograph: Neil Hall/Reuters

Britain’s Prince Harry and Meghan Markle were on Saturday pronounced man and wife at the majestic St George’s Chapel in Windsor Castle where the couple exchanged wedding vows in the presence of 600 guests as millions of people around the world watched the historic event. 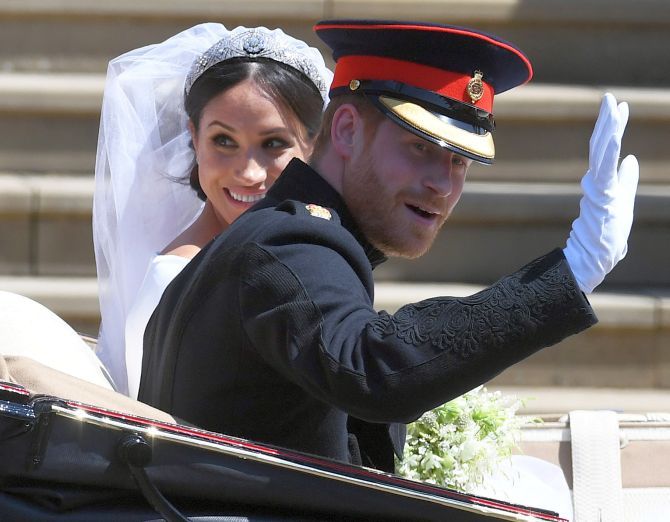 IMAGE: The couple as they started their new married life in the grand Ascot Landau carriage. Meghan waved and smiled to the crowds and said 'wow' to her new husband while, in his inimitable style, he said back: 'I'm ready for a drink now'. Photograph: Neil Hall/Reuters

They were pronounced husband and wife by the Archbishop of Canterbury, cheered on by crowds watching on large screens outside and watched over by Queen Elizabeth II and Prince Philip among the other members of the royal family. It had been announced earlier that the 92-year-old monarch had bestowed the titles of Duke and Duchess of Sussex on the newly-weds in keeping with royal tradition.

The royal couple exchanged their vows and rings in the presence of 600 guests, which included the likes of Meghan’s close friend actress Priyanka Chopra and other celebrities like George and Amal Clooney, David and Victoria Beckham and Sir Elton John. 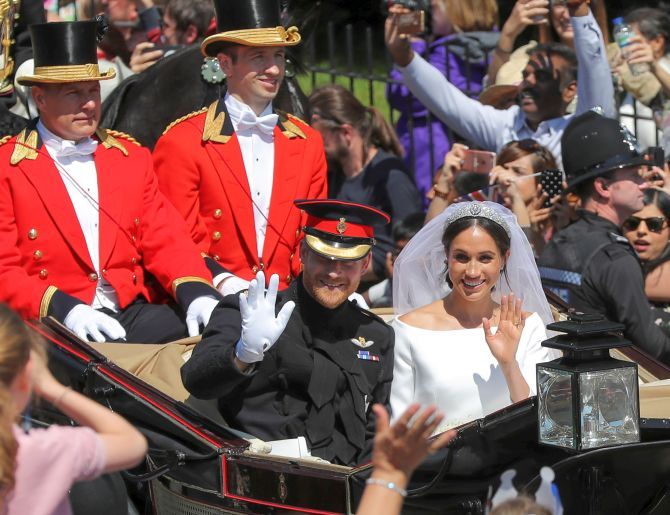 After their marriage ceremony, Prince Harry and Meghan emerged from the chapel -- Household Cavalry lining the steps -- and shared their first kiss as a married couple. The crowd cheered wildly on witnessing the much-awaited scene. 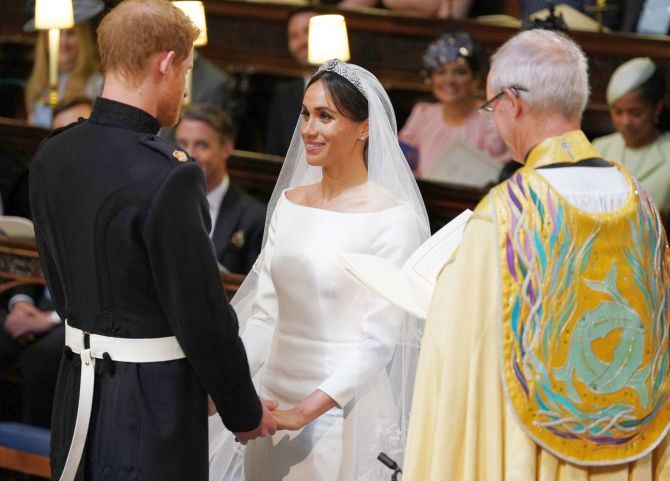 The service was conducted by the Dean of Windsor with Justin Welby, the Archbishop of Canterbury and the spiritual head of the Anglican Church, overseeing the exchange of vows. A black US bishop, Michael Bruce Curry, gave the wedding address.

The wedding became official when Justin Welby read this: “In the presence of God, and before this congregation, Harry and Meghan have given their consent and made their marriage vows to each other. They have declared their marriage by the joining of hands and by the giving and receiving of rings. I therefore proclaim that they are husband and wife.” 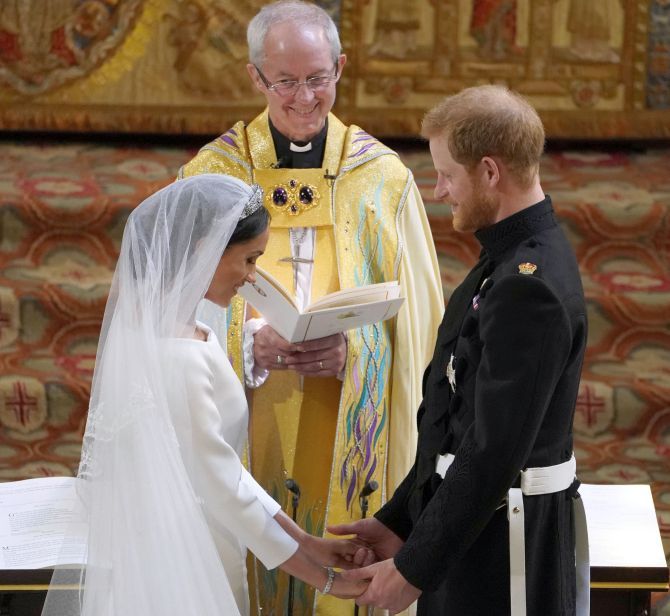 IMAGE: At different points of time of the wedding, Harry looked nervous. There were several personal small moments that the couple shared, which included holding hands, smiles and giggles Photograph: Owen Humphreys/Getty Images

Harry, 33, and Meghan, 36, became the sixteenth Royal Couple to celebrate their marriage at WindsorCastle since 1863.

Harry was seen smiling as Meghan entered the Chapel with Prince Charles. Prince Charles stepped into the role of Meghan’s father and escorted her down part of the aisle for her marriage with Harry after it was confirmed that her father Thomas Markle Sr would not be attending the wedding ceremony due to ill-health. 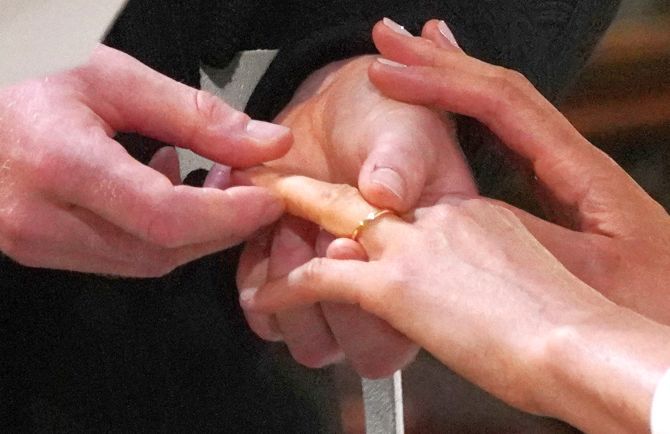 IMAGE: Harry puts a ring on it! The rings have been made by Cleave and Company. Markle’s ring has been fashioned from a piece of Welsh Gold, gifted by Her Majesty The Queen. Prince Harry’s ring is a Platinum Band with a textured finish. Photograph: onathan Brady/Getty Images

Markle’s mother, Doria Ragland, arrived earlier as the only member of Markle’s family to attend the wedding. After an hour-long ceremony, which included hymns and readings, the newly-weds set off to take a tour of Windsor city centre in a traditional open-top Ascot landau horse-drawn carriage. 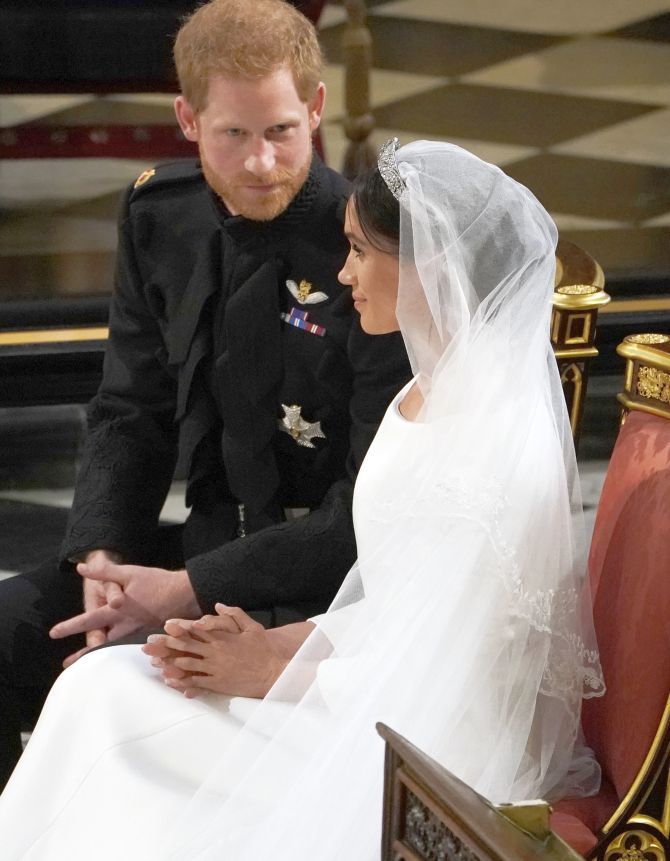 IMAGE: A tearful Prince Harry grabbed his bride Meghan's hand and told her: 'You look amazing' as he saw her for the first time. Photograph: Owen Humphreys/Getty Images

Prince Harry’s niece, three-year-old Princess Charlotte, was one of the six young girls chosen as bridesmaids at the wedding and her elder brother, Prince George, aged four, was a pageboy among a total of 10 children chosen for the roles. 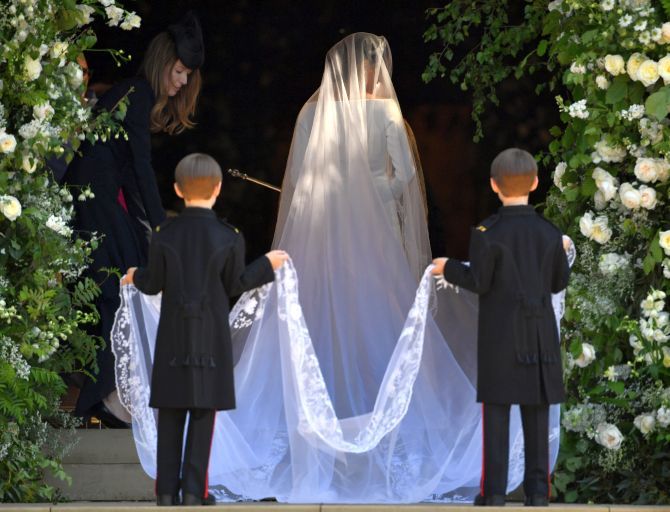 IMAGE: Meghan arrives accompanied by two page boys who held up her train as she made her way up the chapel's steps alone and entered the chapel by herself, to begin the walk down the alter, before being met by the Prince of Wales. Photograph: Ben Stansall/Getty Images

The royal couple chose modern touch to their marriage ceremony.

Instead of using traditional vows, the royal couple selected words from The Marriage Service from Common Worship (2000). 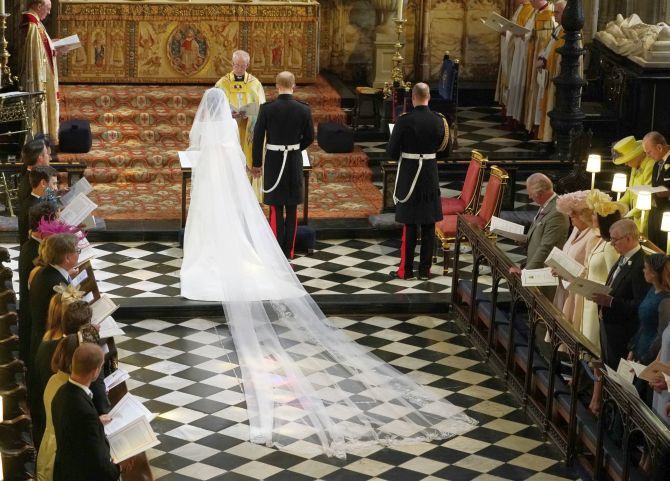 IMAGE: Meghan's delicate veil was five metres long and made from silk tulle with a trim of hand-embroidered flowers in silk threads and organza, with her two pageboys carrying the ends as she made her way up the steps. The Guardian reported -- Meghan “wanted all 53 countries of the Commonwealth with her on her journey through the ceremony” and so Waight Keller created a veil embroidered with the flora of each one." Photograph: Owen Humphreys/Getty Images

They pledged themselves to one another: “for better, for worse, for richer, for poorer, in sickness and in health, to love and to cherish, till death us do part”.

The marriage service featured contemporary language -- using the word “you” instead of “thee” and “thou” and offers the most flexibility in the choice of readings and prayers. 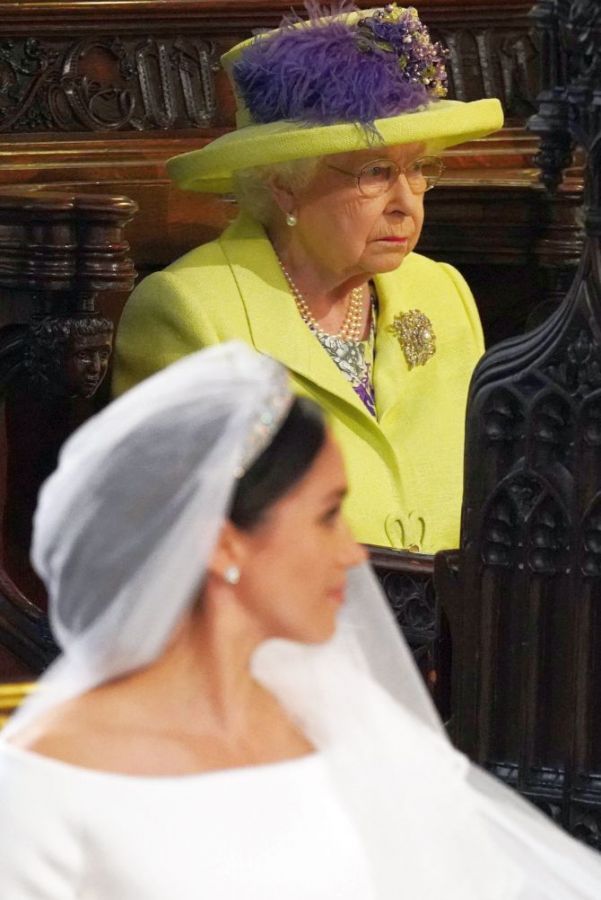 Senior members of the royal family and a raft of celebrities were among the 600 invited guests and another 2,640 members of the public watched the ceremony from the grounds of Windsor Castle. 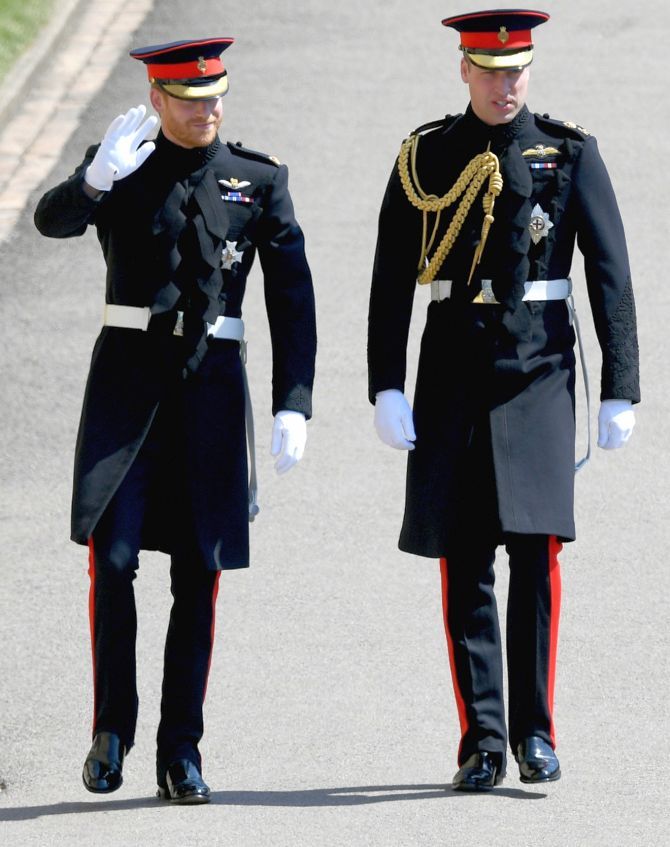 IMAGE: Prince Harry waves to the crowds as he arrives at the chapel ahead of his wedding to Meghan Markle. Harry was accompanied by his brother and best man -- Prince William. Photograph: Shaun Botterill/Getty Images 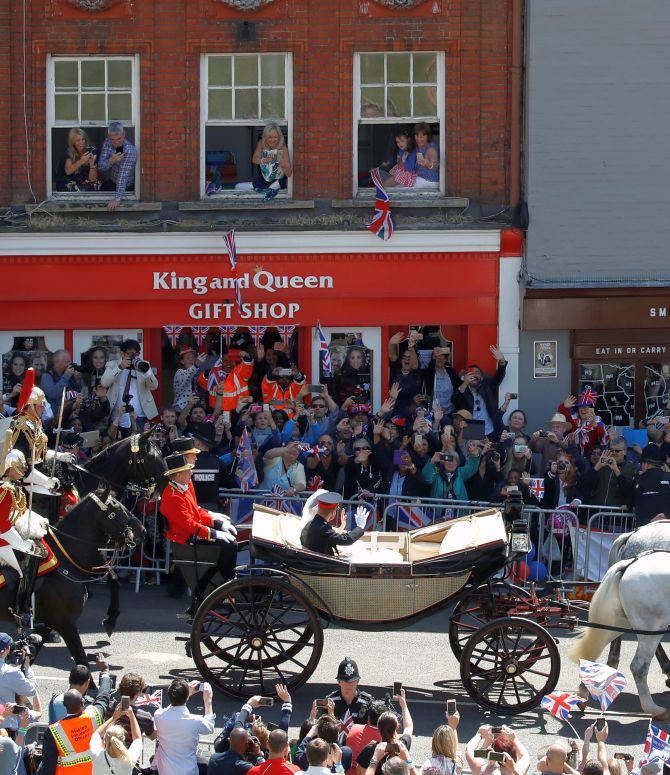 IMAGE: Prince Harry and his wife Meghan Markle wave to the crowd as they ride a horse-drawn carriage after their wedding ceremony. Photograph: Marko Djurica/Reuters 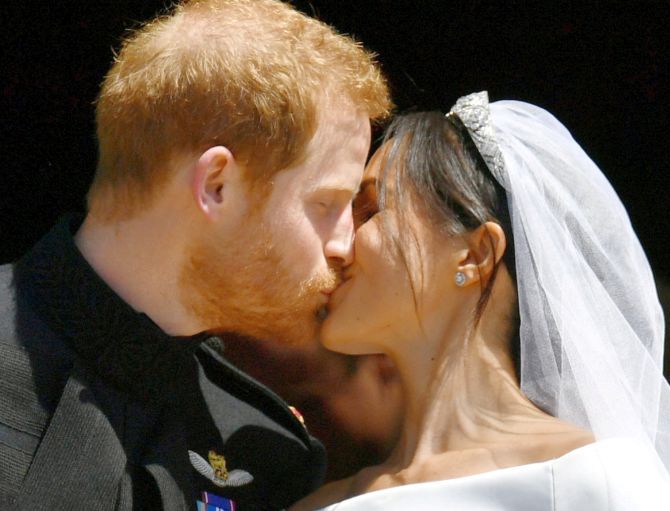