'We don't want citizenship act in Assam, it must go' IMAGE: Media person and Firefighters find shelter in front of a fire brigade vehicle as demonstrators vandalise it during a protest against the Citizenship (Amendment) Act 2019 in Guwahati . Photograph:ANI Photo

Roads in Guwahati have virtually become impossible to navigate as street fires set up by people protesting against the contentious amended Citizenship Act turned the city's sky red.

Normal life in the city has been paralysed to the core as protesters are defying curfew and venturing out on the streets.

This was the scene on Thursday and is unlikely to change as the protesters are not willing to relent.

They are up in arms against the Citizenship (Amendment) Bill, which was passed by Rajya Sabha on Wednesday and got President Ram Nath Kovind's seal of approval a day later.

From an otherwise busy traffic intersection near Guwahati ISBT, to a public square on NH-37, Guwahati streets literally burned, the smoke adding a dramatic feel to the critical atmosphere in the city. IMAGE: A deserted road in Guwahati during the protest. Photograph: ANI Photo

Passengers were left stranded at airports and bus terminals, with protesters refusing to allow even two-wheelers to pass through in a tense situation in the city even as the army carried out flag matches and police and paramilitary forces kept a tight vigil.

"We don't want CAB in Assam, it must go," said an angry protester, who along with an army of fellow anti-CAB Assamese occupied a prominent square, surrounded by bonfire of tyres and strewn stones in the streets.

The National Highway-37 literally, by parts had heaps of smouldering ashes or fire from burnt tyres, at some places, several bonfire, with flames reaching ominous heights presenting an intimidating sight to passers-by and wearied travellers. 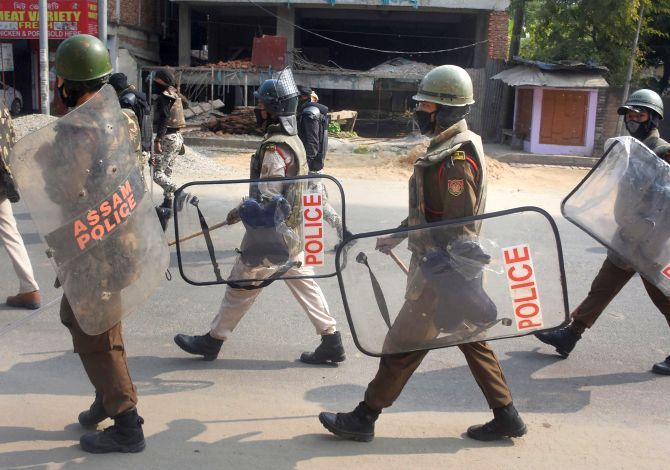 Cries of 'Joi Ai Axom' (glory to mother Assam) rent the air on highways and streets as many protesters stood huddled at prominent roads, torching even twigs and branches of trees into the bonfire on a cold December.

At least two persons died of bullet injuries on Thursday after police opened fire on protesters in Guwahati, officials said.

Locals in Hatigaon area were seen tense-looking after reports of firing by security forces in the vicinity on Thursday, even as most locals preferred to stay indoors. 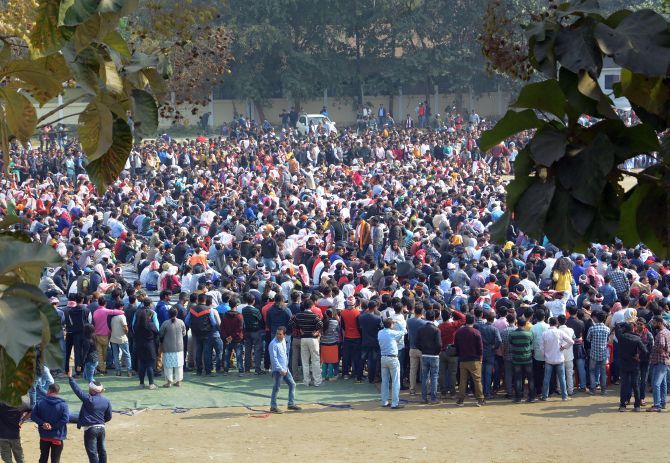 IMAGE: People assemble for a peaceful protest against the Citizenship Amendment Act despite curfew in Guwahati. Photograph: PTI Photo

At a section of NH-37, a group of protesters, standing beside a row of bonfire, were seen forcing an Army car and civilian vehicles to turn around and take a detour through inner streets.

In Rani Rasta, young protesters squatted on the streets and refused to let go any vehicle past it, while near Deepor Beel lake, a graffiti on the street said: "Say no to CAB" in giant letters.

The intensified protests left passengers stranded at Guwahati airport and the ISBT.

A rear windshield of a government bus was seen shattered at the bus facility while travellers eagerly waiter to carry on with their journeys to outstation areas like Shillong and Dimapur. 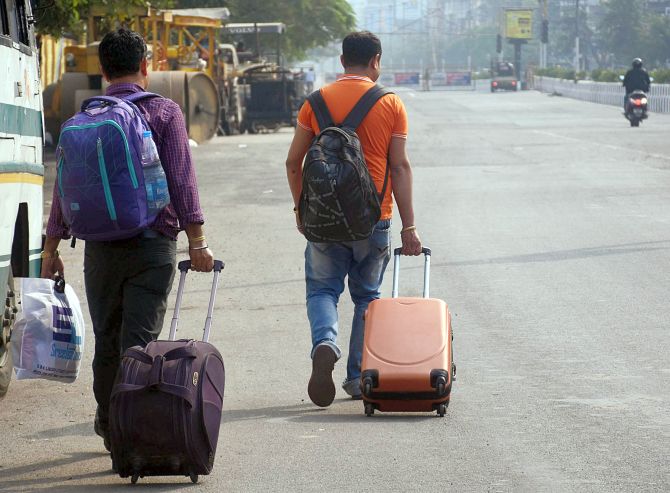 IMAGE: Passengers moving to another location on a deserted road during the curfew. Photograph: ANI Photo

"We are protesting because CAB is against our Constitution, and in future, its repercussions will be telling for Assamese people, and our culture and language might get seriously affected by influx of infiltrators," said Jyotish Kumar who lives near Lakhara here.

Tapash Chandra Das said, "After Assam agitation and subsequent Assam Accord which talked about evicting illegal immigrants irrespective of their religion, we cannot afford to have this CAB."