India displayed its military might and vibrant cultural heritage on Rajpath on Wednesday with the grandest flypast with 75 aircraft to mark the 'Azadi ka Amrut Mahotsav' celebrations being the highlight of the 73rd Republic Day Parade, which was drastically scaled down in view of the Covid pandemic. Showcased at the parade were the Centurion tank, PT-76 tank, 75/24 Pack howitzer and OT-62 TOPAZ armoured personnel carrier that played a major role in the defeat of Pakistan in the 1971 war.

India in 2021 celebrated the Swarnim Vijay Varsh (Golden victory year) to commemorate the country's win over Pakistan in the 1971 war that led to the creation of Bangladesh. The ceremony began with Prime Minister Narendra Modi leading the nation in paying homage to the martyrs by laying a wreath at the National War Memorial, a monument to the soldiers who have made supreme sacrifice for the country. Defence Minister Rajnath Singh and the three service chiefs were present at the solemn ceremony.

The prime minister ditched his traditional turban look on Republic Day this year and wore a traditional cap from Uttarakhand with an image of the brahmakamal, the state flower, and also sported a stole from Manipur.

Amid COVID-19, there was no foreign chief guest at the parade for the second consecutive year. 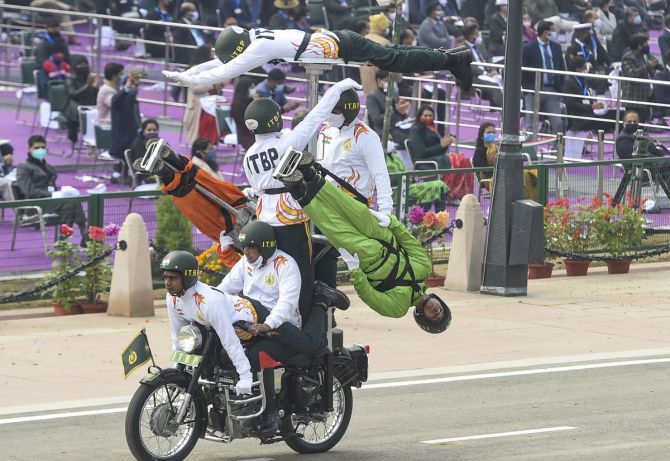 However, Swachhagrah, frontline workers, auto rickshaw drivers, construction workers and labourers who prepared the majestic tableaus were among special guests invited this year to the parade, which started at 10.30 am, half-an-hour later than usual for better visibility. 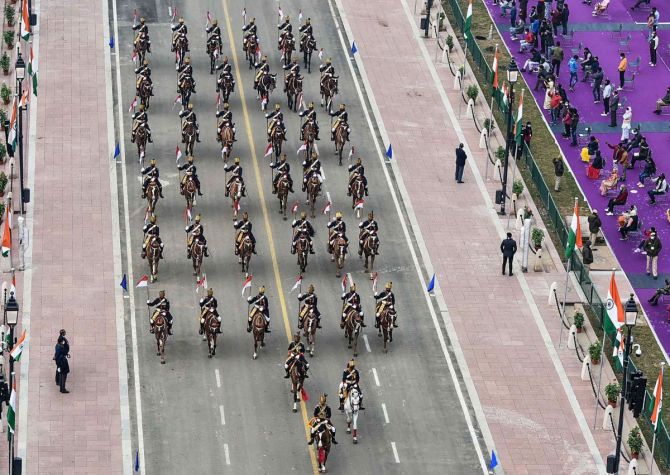 The national flag was unfurled followed by the national anthem, synchronised with a 21-gun salute.

Horse-mounted soldiers of the Indian Army's 61 Cavalry Regiment, the only active horsed cavalry unit in the world currently, was the first marching contingent at the parade. The parade saw the launch of 'Shaheedon Ko Shat Shat Naman' programme by the National Cadet Corps and a display of ten scrolls each of 75 metres prepared during the 'Kala Kumbh' event besides installation of 10 large LED screens for a better viewing experience of spectators.

The contingents of security forces were followed by tableaux from states that showcased India's cultural diversity, with themes ranging from the freedom struggle to biodiversity. 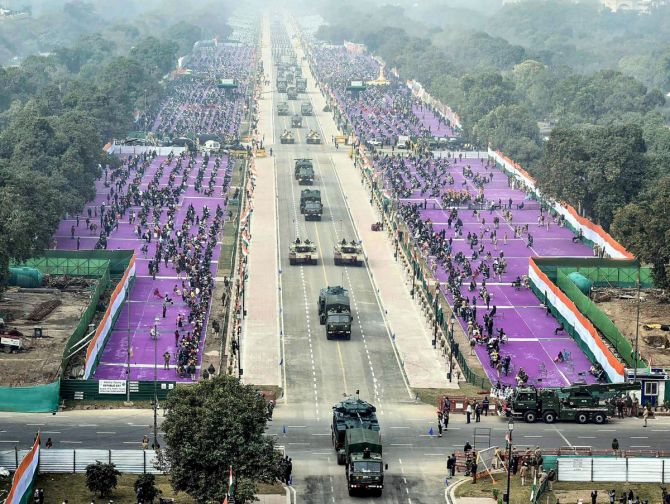 The Lok Adalat tableau made its debut on Rajpath this year. The front part of the tableau showcased 'Nyay Sabke Liye', a hand gesture of fearlessness, guarantee and protection.

Martyrs and independence movement was the theme of poll-bound Punjab's tableau while the Department of Post's tableau displayed the robust outreach and the modern face of India Post as well as all-women post offices to showcase the steps taken towards gender equality. Dancers from the Kunbi community, the original inhabitants of Goa, and glimpses from the liberation struggle were the highlight of the tableau of the coastal state while Karnataka's skillfully made pots, carefully sculpted sandalwood miniatures and rich tradition of handicraft were on display in the state's tableau. 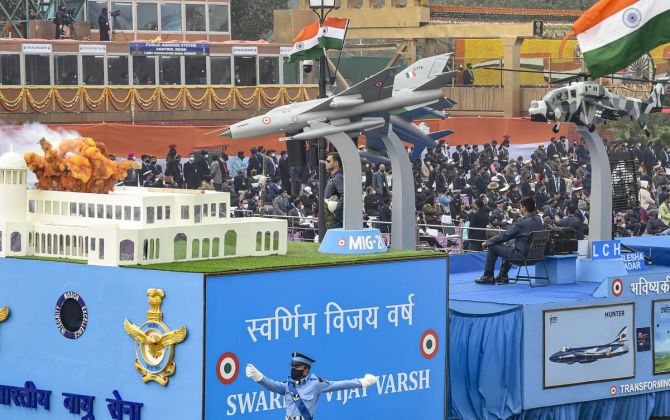 A team of women daredevils from the Border Security Force got the adrenaline rushing as they performed gravity-defying motorcycle stunts on Rajpath during the parade.

The 'Seema Bhawani' motorcycle team received applause and appreciation from the spectators, including several Union ministers and other dignitaries many of whom gave the women troupe a standing ovation. 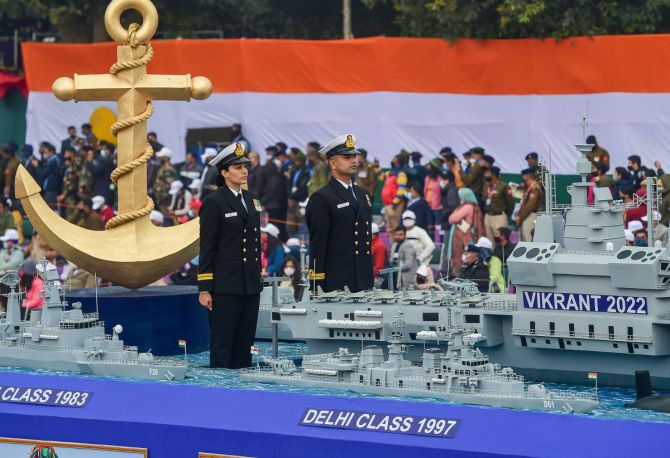 The parade then saw the largest ever aerial display with 75 aircraft taking part in the majestic flypast highlighting India's military power.

This year, viewers could also see the cockpit of the aircraft on the screens at the parade venue as well as during the broadcast.

The parade ended on an emotional note as Virat, the President's Bodyguard Commandant's black horse, retired from his years long service after the 73rd Republic Day parade on Wednesday. 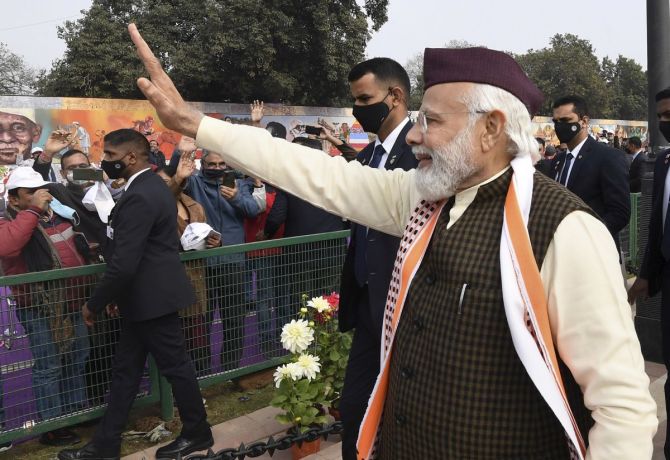 President Kovind, Prime Minister Modi and Defence Minister Singh patted and bid farewell to the magnificent horse after the parade.

Known otherwise to witness huge bustling crowds across many age groups, the annual ceremonial event at Rajpath was scaled down this time in view of the coronavirus pandemic, with spectators' size drastically cut to 5000 from the 25,000 last year.

In the pre-pandemic times, over one lakh spectators used to witness the parade. From members of contingents to spectators, everyone wore masks.

The audience maintained the mandated distance while sitting, and standing spectators were not allowed.

Only double vaccinated adults and children above the age of 15 who have taken at least one dose of a COVID-19 vaccine were allowed to enter the venue. Children below 15 years were not permitted to attend. 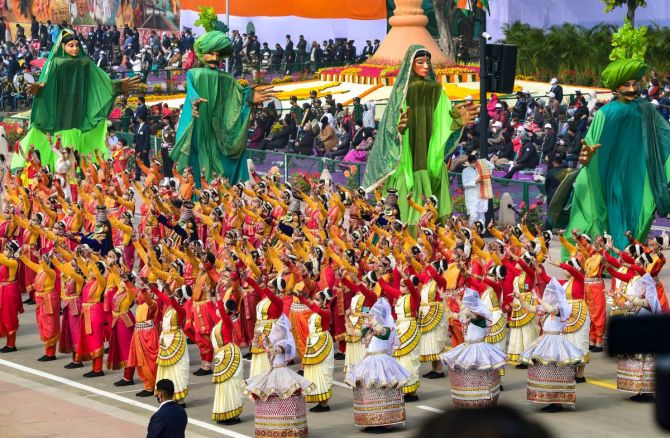 There was tight security with personnel maintaining strict vigil.

Chairs were placed at a distance to ensure social distancing.

Delhi was brought under a heavy security cover as the city police had intensified patrolling and sealed the borders in coordination with its counterparts from the neighbouring states to thwart any untoward incident amid a terror alert by intelligence agencies.