From a series of huge, silent and disciplined marches to violent demonstrations, the protest by the Maratha community now is an antithesis of their efforts to seek reservations in jobs and education. 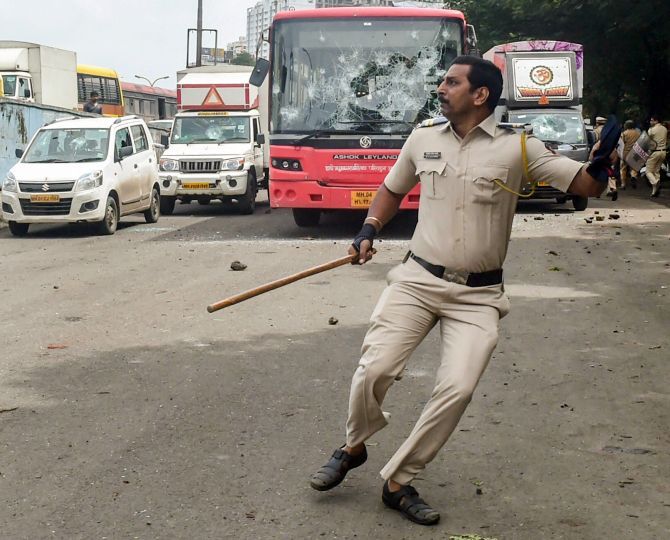 IMAGE: A policeman defends himself as Maratha Kranti Morcha protesters pelt stones during their statewide bandh, called for reservations in jobs and education protesters, in Thane. Photograph: Mitesh Bhuvad/PTI Photo

Representatives of the Maratha community attributed the stepping up of pressure by the community to the “arrogance and lies” told to its members by the Bharatiya Janata Party-led government, and the “uncontrolled anger” among its youth over the delay in getting reservations.

They said the protest would be carried out in a non-violent manner and asked the government to look for an out of court resolution to the issue till the Bombay high court delivers its verdict in a related case.

The Marathas, who form around a third of the state’s nearly 13 crore population, held over 50 ‘mook morchas’ (silent marches) in 2016 and 2017 across Maharashtra pressing for reservation among other demands.

The state legislature in 2014 passed a bill to grant quota to the community. That law was stayed by the Bombay high court. The present government had then approached the Supreme Court.

With no relief in sight in the apex court, the state government again approached the high court, which asked it to form a backward commission and submit a report through it.

Chief Minister Devendra Fadnavis recently told the state legislature that the Constitutional process was still on. 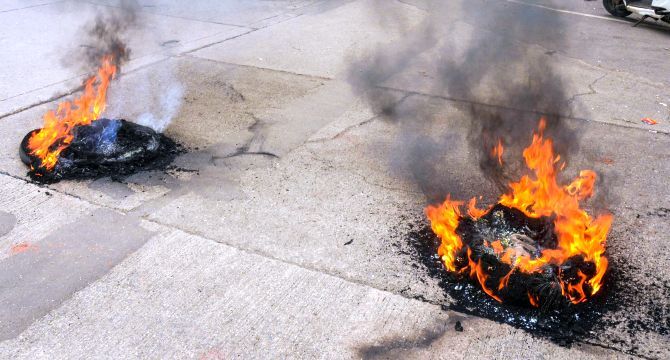 Asked about the trigger for the latest acts of violence and suicides by protesters, Rajendra Kondhare, general secretary of Akhil Bhartiya Maratha Mahasangh, said
members of the community were losing patience.

The Mahasangh was clueless about who were the people engaged in violence under the guise of the protest, he said.

“People are not ready to listen now. The anger now is beyond control. The layman won't understand that the court procedures take time. So, people and courts can’t be blamed,” he said.

Kondhare underscored a need to convene a meeting of all the political parties in the state immediately to resolve the issue.

“Opinions should be sought on what the government can do to resolve the issue immediately out of court,” he said.

Sambhaji Brigade chief and state coordinator of Maratha Kranti Morcha Pravin Gaikwad charged the government with being arrogant and apathetic towards the demands of the community.
“Some community members staged protest in Parali (in Beed) recently. No government representatives went to them. Then they announce of staging protest in Pandharpur on the day of Ashadhi Ekadashi,” Gaikwad said.

“The chief minister chose not to perform the maha puja, saying there were inputs about possible disturbances. Two of his ministers said the protesters had political
patronage. All this led to the current protest,” he said.

Both Kondhare and Gaikwad, however, maintained that the protest would be conducted in a peaceful manner.

Protesters attacked buses, stopped train services and blocked highways in parts of the state as part of their latest round of agitation, which has seen a youth commit suicide
flinging himself in Godavari river in Aurangabad, while a demonstrator who consumed a poisonous substance in the same district died on Wednesday.