From farmer to Hitler, this TDP MP has various avatars

Naramalli Sivaprasad dresses depending on the political point he wants to convey. 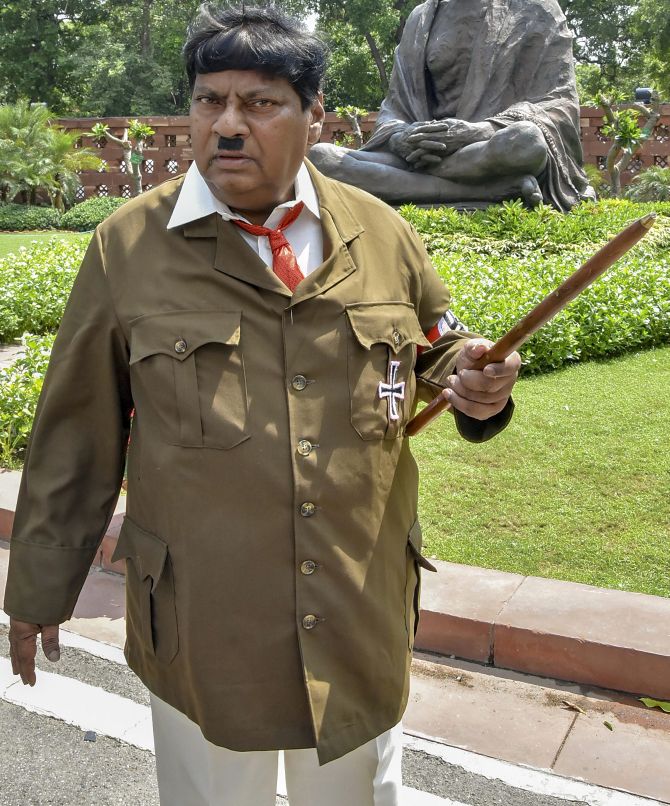 IMAGE: Naramalli Sivaprasad said he decided to don the Fuehrer’s avatar to remind Prime Minister Narendra Modi of his promise to give Special Status Category to Andhra Pradesh, post bifurcation of the state. Photograph: PTI Photo

Clothes make the man, it is said, and sometimes maybe the politician too, as in the case of Telugu Desam Party MP Naramalli Sivaprasad who on Thursday dressed up as Hitler to send Prime Minister Narendra Modi the message that he should not “follow” the the Nazi dictator’s footsteps.

Sometimes a woman, other times a farmer or a cattle herder, depending on the political point he wants to convey, Sivaprasad said he decided to don the Fuehrer’s avatar to remind Modi of his promise to give Special Status Category to Andhra Pradesh, post bifurcation of the state.

Wearing a khaki coat and sporting a toothbrush moustache, Sivaprasad said, “I wanted to send a message to Prime Minister Narendra Modi not to follow Adolf Hitler.

“During elections, he promised SCS to the people of the state but has then back-tracked. He does not get the pulse of what people want and I want to urge him to not be like him.”

Sivaprasad, who attended the House in his Hitler costume, also raised his hand in ‘Heil Hitler’ salute for camerapersons outside. 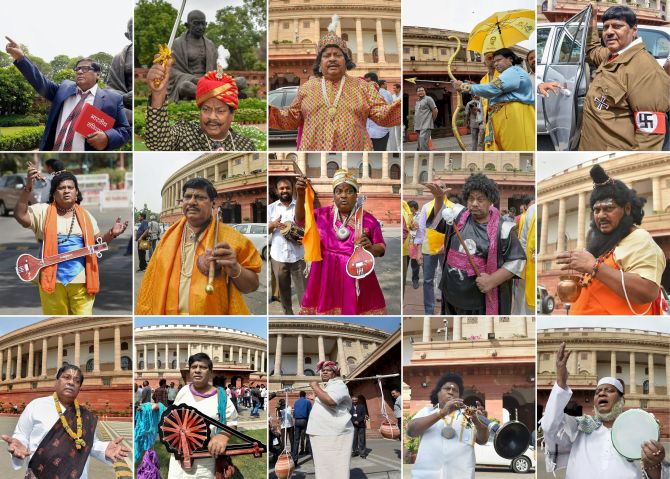 IMAGE: The many characters that Sivaprasad has depicted during Parliament. Photograph: PTI Photo

The TDP was a constituent of the National Democratic Alliance until March this year, but quit the government and the NDA over the demand for special category status to Andhra Pradesh.

“Ours is a democracy and it is necessary to understand the aspirations of the people,” said the two-time MP who represents Chittor in Andhra Pradesh.

An actor, whose has worked in several Telugu films, Sivaprasad has in the past donned various avatars to attract attention.

During the last Budget session, Sivaprasad had dressed up as a woman, a farmer, a cattle herder, a Muslim cleric and a ‘swachch’ Bharat worker.

“I am an artist and cannot sit quiet. I have to express myself. To represent the plight of women who were hit by demonetisation, I also dressed like one,” he said. 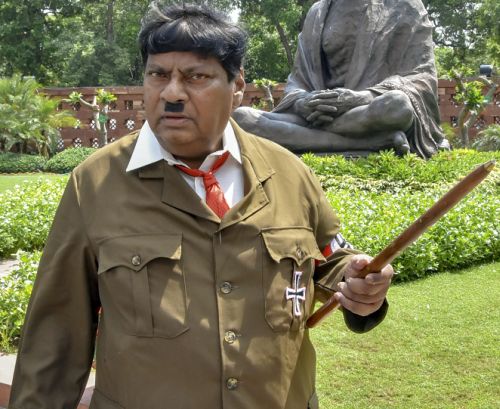