IMAGE: Brick-bats lie on a road during clashes between Anti-CAA (Citizenship Amendment Act) protesters and the police at Seelampur in New Delhi on Tuesday. Photographs: Shahbaz Khan/PTI Photo

The national capital continued to reel under swirling agitation against the alleged 'divisive' law with thousands of students hitting streets near the Jamia Millia Islamia, where a violent protest had occurred on Sunday, and elsewhere for what they called 'protecting the soul of India'.

As many as 21 people, including 12 policemen and six civilians, were injured in the clashes in Seelampur which continued for one-and-half hours, while five persons have been detained, according to police.

Police said they used tear gas shells to disperse the mob but denied that there was any baton charge on protesters.

As fresh clashes erupted in Delhi and elsewhere, leaders of opposition parties knocked on the doors of President Ram Nath Kovind urging him to advise the Centre to withdraw the 'unconstitutional and divisive' citizenship amendment law. 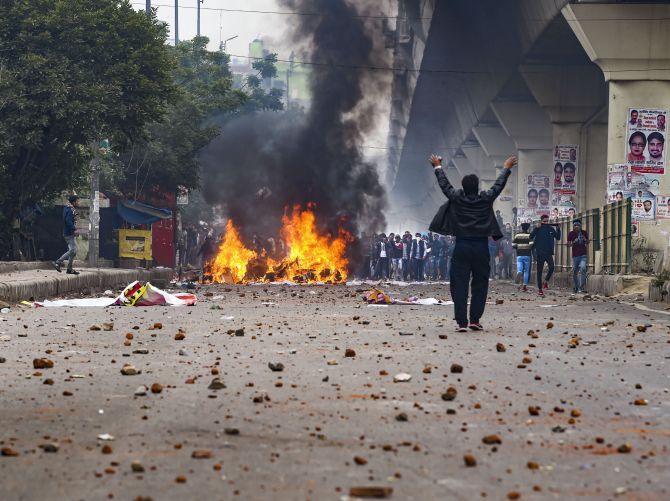 IMAGE: Police said they used tear gas shells to disperse the mob but denied that there was any baton charge on protesters.

In the backdrop of the violence, Union Home Minister Amit said he has directed the Delhi Police to maintain law and order and to ensure peace in the national capital.

Delhi Police Commissioner Amulya Patnaik briefed Union Home Secretary Ajay Kumar Bhalla and other senior officials of the ministry on the violence at Jamia Milia University and Seelampur during anti-CAA protests and the prevailing situation in the national capital, officials said.

The home ministry officials are said to have expressed their unhappiness over the two incidents happening within just three days, an official said, adding they asked the Delhi Police brass to strengthen intelligence gathering mechanism so that such incidents do not occur in future.

The protest at Northeast Delhi's Seelampur turned violent when police stopped them from moving ahead. The agitated crowd clashed with police, pelted stones at police personnel and damaged vehicles, including a school bus which had a driver and student.

They said two bikes of traffic cops were burnt by the demonstrators, adding two police booths in the area was vandalised and CCTV cameras installed there were taken away by the mob. 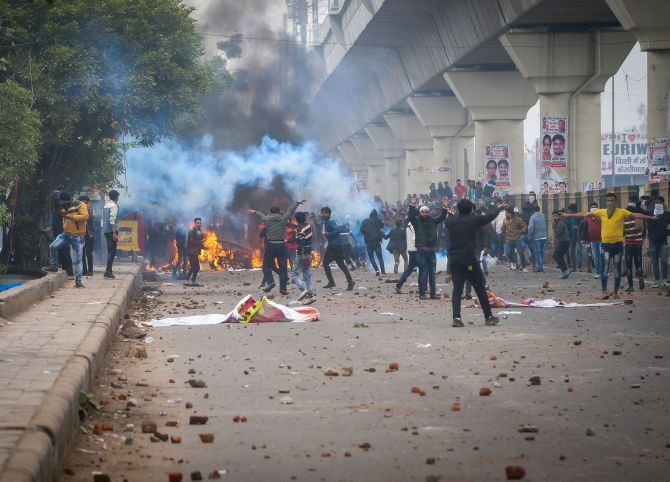 IMAGE: The clashes erupted two days after violence broke out during a protest in the New Friends area in South Delhi near Jamia Millia Islamia.

Police said two first information reports have been registered at Seelampur and Jafrabad police stations in connection with the incident.

The clashes erupted two days after violence broke out during a protest in the New Friends area in South Delhi near Jamia Millia Islamia.

Police said there were initially small groups of people who started the protest against the citizenship law and they went in lanes and bylanes of Seelampur.

By the time they came on the Jafrabad main road, there were almost 3,000 people and the police were escorting them.

"When they started dispersing, suddenly stones were hurled. We made several requests to them not to pelt stones, but they did not relent, forcing us to use tear gas to disperse them," said a police official.

Gates of seven metro stations were closed in the wake of the protest, and five of them were reopened after some time. Traffic was also diverted from the area. IMAGE: Two FIRs have been registered at Seelampur and Jafrabad police stations in connection with the incident.

The Aam Aadmi Party and its Seelampur MLA Haji Ishraq urged the people to register their protest peacefully after the area witnessed violence.

"I am appealing all the people to register protest and convey their message peacefully," Ishraq said in a video message.

Meanwhile, 10 people with criminal background have been arrested for their alleged involvement in the violence near Jamia Millia Islamia University on Sunday, police said, adding none of them were students.

On Sunday, scores of people, including Jamia students and policemen, were injured, four DTC buses were set afire and over 100 private vehicles were damaged when protesters opposing the amended Citizenship Act clashed with police near New Friends Colony.