He lost his bastion Amethi, failed as party president, handing the Bharatiya Janata Party an unprecedented victory, and left many with this question -- is it time to write Rahul Gandhi's political epitaph? 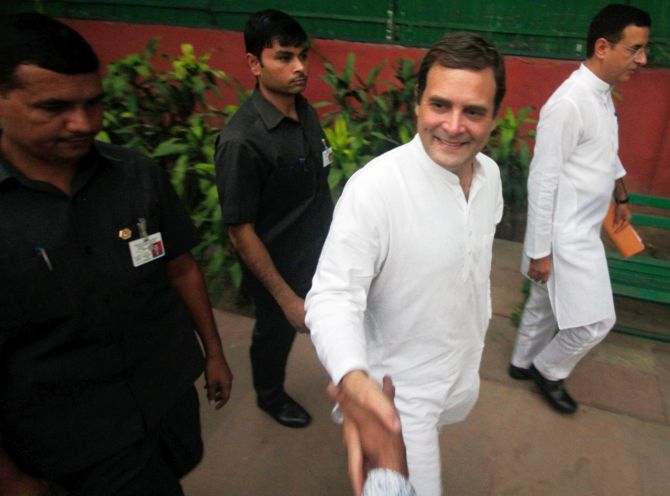 IMAGE: Rahul Gandhi greets a supporter after his press conference in which he admitted defeat and congratulated Prime Minister Narendra Modi on his victory. Photograph: ANI Photo

In a classic case of win some and lose plenty, Gandhi was poised to enter the Lok Sabha from Wayanad in Kerala with trends showing he might win with more than 7 lakh votes, amongst the highest totals in this Lok Sabha election.

Dismissed as Pappu by some and crown prince by others, Gandhi appeared to take the poll debacle on the chin, congratulating Prime Minister Narendra Modi and the BJP for their win and also expressing the hope that the BJP's Smriti Irani takes care of Amethi "with love".

"I accept 100 per cent responsibility," Gandhi said at a press conference after it became evident the party was headed for a rout. He sidestepped a question on whether he will resign, saying it was for the CWC to take a call on this.

But it came to nought.

As the grand old party prepared for five years in the pale shadows of its glorious past, it seemed the party may not get the Leader of Opposition status in the Lok Sabha for the second time in a row.

The shock verdict will be fully attributable to the 48-year-old and his sister and general secretary Priyanka Gandhi Vadra. The brother and sister were the star campaigners for the Congress in this election and together steered the party narrative and line.

This was the first Lok Sabha election where their mother, United Progressive Alliance chairperson Sonia Gandhi, did not campaign and neither did former prime minister Manmohan Singh. Many in the party questioned the strategy of keeping Singh away from the campaign circuit.

That the Congress managed a measly gain of around 10 per cent since it won 44 MPs, its lowest ever in the 2014 LS polls, makes matters worse for Gandhi who took over as party president in December 2017 and promised a revival.

Until late last year, when Gandhi successfully captained the party to victory in the three Hindi heartland states of Rajasthan, Madhya Pradesh and Chhattisgarh, it seemed he was in some position to take on Prime Minister Narendra Modi. 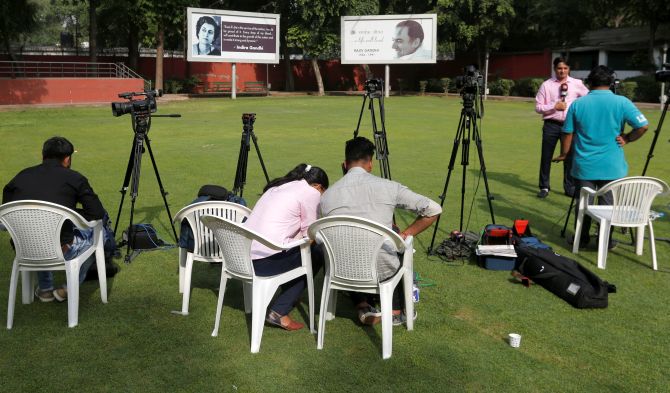 Gandhi has grown in confidence over the years, addressing press conferences, answering questions and tackling the BJP government on a host of issues. He often challenged Modi to a debate.

But the gains were soon squandered as the Congress dithered on strategy for national elections jumping from issue to issue and never quite understanding what would work.

The party and its president, it seemed, were also unable to articulate their views effectively enough. The Rafale fighter jet deal was one such example, turning a cropper in the electoral battlefield, party leaders said.

Although Gandhi addressed over 10 press conferences on the issue in the hope that it would stick, results show people were not even listening.

Party insiders privately speak of having flagged the futility of Rafale to Gandhi but to no avail.

What's worse was the "chowkidar chor hai" slogan Gandhi coined for Modi and used it relentlessly during the campaign. Modi turned it around with his counter "Main bhi chowkidar" to great effect.

Results show Modi's counter was accepted by the people -- something a section of Congress leaders had a hunch about.

Veteran Congress people were therefore never heard raising the "chowkidar" slogan which many thought was needless and negative.

Gandhi's flagship minimum income guarantee scheme "Nyay", which he personally steered, also came rather late in the day and eventually did not resonate on the ground.

"It seems the 'Chowkidaar' proved heavy over the 'Nyay' scheme and the Rs 72,000 per year dole to wipe out poverty from the country did not work," a party veteran said.

Party leaders also said the top leadership would have to sit and deliberate on why their narrative failed to resonate on the ground.

Gandhi's personal decision to not strike potential alliances with the Aam Aadmi Party in Delhi and Bahujan Samaj Party-Samajwadi Party in Uttar Pradesh and to field his own candidates against anti-BJP fronts also proved dear.

That the Congress, once led by titans like Mahatma Gandhi, Jawaharlal Nehru and Indira Gandhi, has come to look like regional players is a matter of huge concern to Congress veterans who feel Gandhi would need to undertake brutal and honest personal and organisational dissection to keep the party afloat.

Sanjeev Chopra
© Copyright 2020 PTI. All rights reserved. Republication or redistribution of PTI content, including by framing or similar means, is expressly prohibited without the prior written consent.