Maharashtra CM said a high-level committee will probe the circumstances under which the 40-year-old overbridge collapsed. Six persons were killed and 31 injured after section of a foot overbridge near a busy train station in south Mumbai collapsed during evening rush hour on Thursday, officials said.

The bridge, which connected the area near the Times of India building with the iconic Chhatrapati Shivaji Maharaj Terminus railway station, was commonly called 'Kasab bridge' as the 26/11 Mumbai attack terrorist passed through it during the strike.

The injured have been admitted to nearby hospitals, a disaster management cell official said. Just after the incident, Mumbai Police had tweeted: "Foot over-bridge connecting CST platform 1 north end with B T Lane near Times of India building has collapsed. Injured persons are being shifted to hospitals. Traffic affected. Commuters to use alternate routes. Senior officers are on spot."

Prabhu and Tambe were employees of the G T Hospital, the officials said.

A case has been registered against officials of Central Railway and the BMC in connection with the incident, police said.

"We have registered an offence under section 304A (causing death by negligence) of the IPC at the Azaad Maidan police station," said Manjunath Singe, spokesperson of the Mumbai Police.

Additional Municipal Commissioner of the BMC, Vijay Singhal, said the remaining portion of the damaged bridge is being dismantled manually. He said action will be taken against the firm that conducted the structural audit of the bridge.

Deven Bharti, Joint Commissioner (Law & Order), told PTI that police "will, for sure, launch an inquiry into the incident". 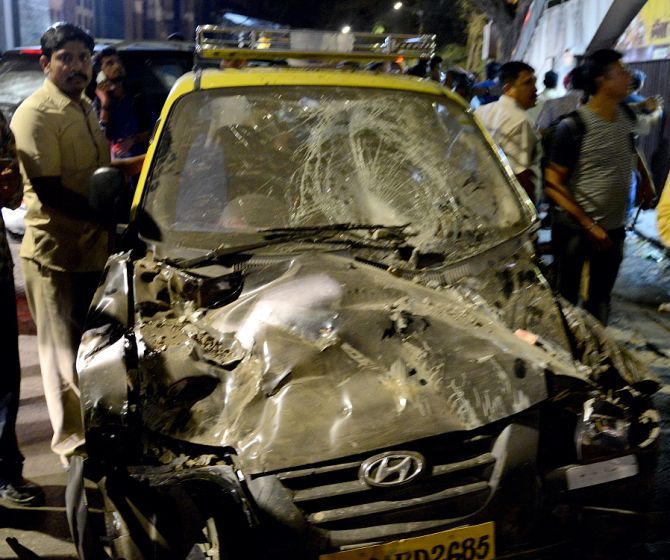 The tragedy comes eight months after another bridge collapsed in suburban Andheri, in which five persons were killed.

Maharashtra chief minister Devendra Fadnavis announced a compensation of Rs 5 lakh each to the family of the deceased and said a high-level committee will probe the circumstances under which the 40-year-old overbridge collapsed.

"The injured persons will get Rs 50,000 each and the government will bear the cost of their treatment," Fadnavis said, adding that officials found responsible for the incident will be booked.

A 45-member team of the National Disaster Response Force was at the site. An eyewitness said the over-bridge was being used by pedestrians even as repair works were ongoing.

Several motorists were also under the bridge when it came down, which led to an increase in the number of injured, an official said. "We have appealed the motorists to avoid the D N Road to JJ Flyover section."

Another eyewitness said most of the victims were walking on the overbridge on their way to the CST station when it collapsed.

"Thankfully, when the bridge collapsed, it was red signal at the nearby road, otherwise several people would definitely have been crushed under the rubble," said a taxi driver, who luckily escaped the tragedy. 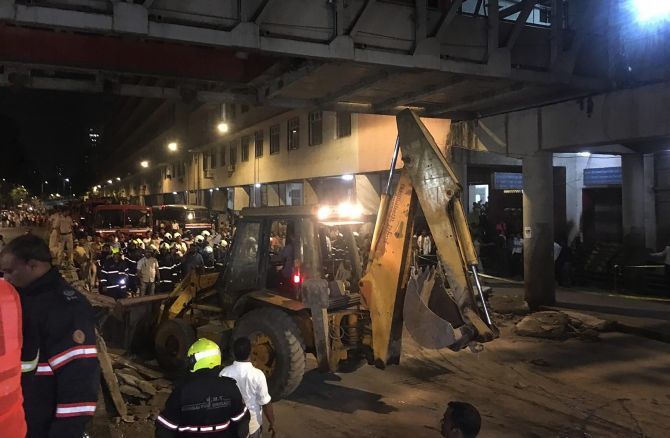 Faizan Ahmad, who witnessed the incident, said it appeared as if a powerful bomb went off. "The dust and cries of the victims filled us with fear and we soon realised that a bridge has fallen."

Manish Jha, a reporter with a Hindi daily, had a lucky escape. "It looked like I had near death experience. The moment I walked on the bridge, I felt its floors vigorously swaying," he said.

Amid tragic scenes, some people were seen taking selfies with the debris of the bridge in the background. Lawmakers and local party leaders rushed to the spot as political blame-game ensued.

Arvind Sawant, the local Shiv Sena MP, said, "This bridge was under minor-repairing after the audit of all bridges in the city. Action will be initiated against the responsible officials."

Local BJP MLA Raj Purohit also visited the spot and demanded immediate action against the engineer who had declared the bridge as 'safe'. "He should be arrested right now. He is responsible for the entire disaster." Local Shiv Sena corporator Sujata Sanap said she had alerted officials about the structure, but they did not act in time. "I have been pursuing the issue of this unsafe bridge for long and also wrote so many letters to officials but they were ignored."

The collapse will be jointly probed by BMC and Central Railways, said Vinod Tawde, District Guardian Minister of Mumbai.

Congress leader Milind Deora said murder charge should be slapped on auditors who inspected the bridge and the BMC officers who appointed them. "Mumbaikars feel very unsafe in the city, considering the frequent incidents of bridge collapses," the former MP said.

"I am not politicising the issue, but hollow promises are not going to serve the people anyway. This is failure of the government and the system," he added. In July last year, portion of a road over-bridge had collapsed in suburban Andheri. Railway Minister Piyush Goyal had then announced a joint safety audit of all 445 bridges in Mumbai.

Following the order, the railways, the BMC and the IIT-Bombay had conducted a safety audit.