Incessant downpour battered several states, including Kerala, Maharashtra and Karnataka, on Friday, with landslips and floods throwing normal life out of gear.

-- Kerala Chief Minister Pinarayi Vijayan said 28 people have died over the past three days in rain-related incidents in the state, which is again at the receiving end of the nature's fury.

-- At least 40 people are feared trapped under debris in major landslides that took place in Wayanad and Malappuram.

-- Rail, road and air transport took a hit in the state with several trains being cancelled and the CochinInternationalAirport shut till August 11 due to water-logging in almost 60 per cent region of its operational area.

-- Over 2.85 lakh people have been evacuated due to the devastating floods in western Maharashtra's five districts, including the worst-hit Kolhapur and Sangli, with the death toll reaching 29 on Friday.

-- The floods and rains have left a trail of destruction in vast areas of north, coastal and Malnad districts of the state. 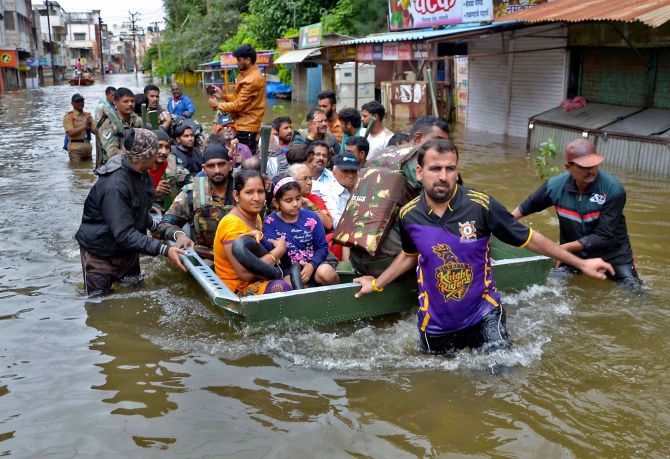 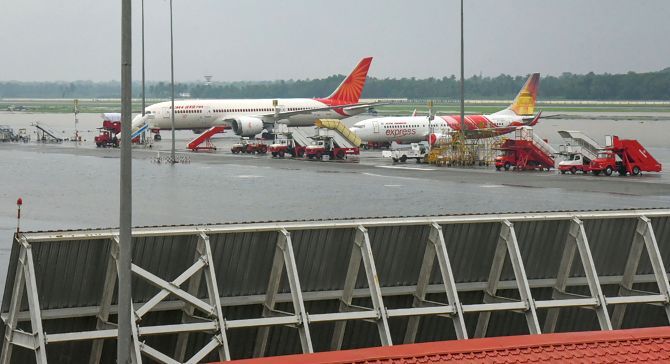 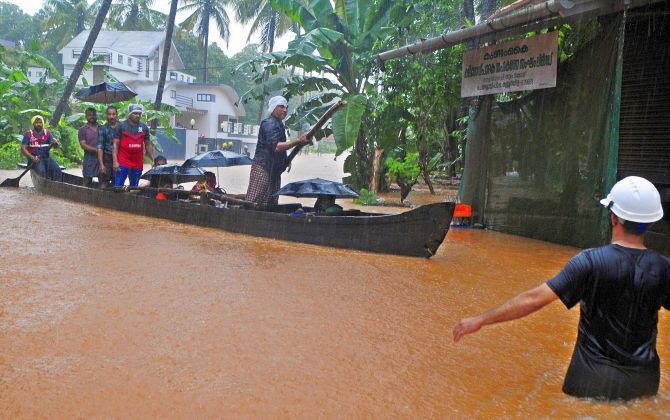 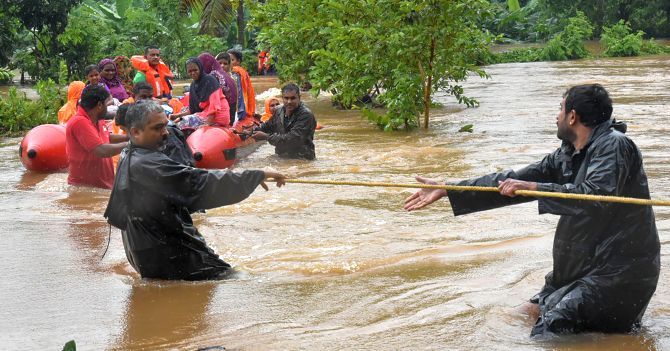 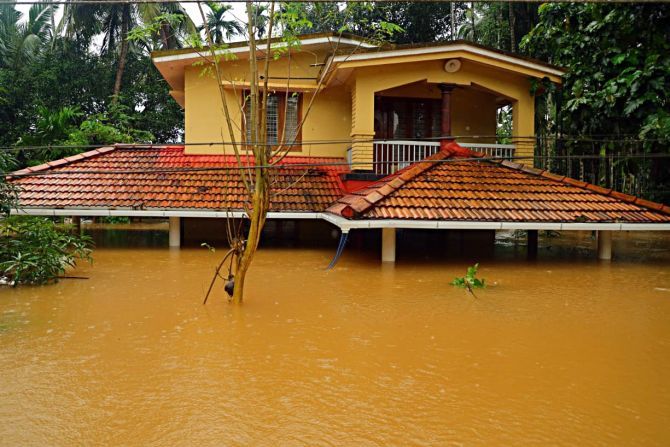 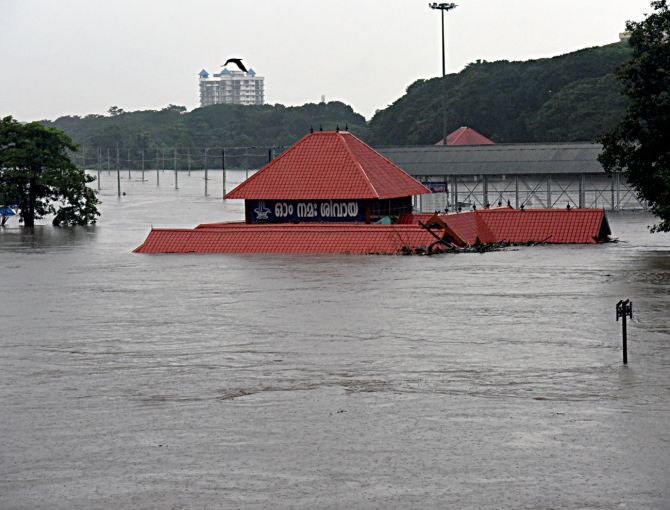 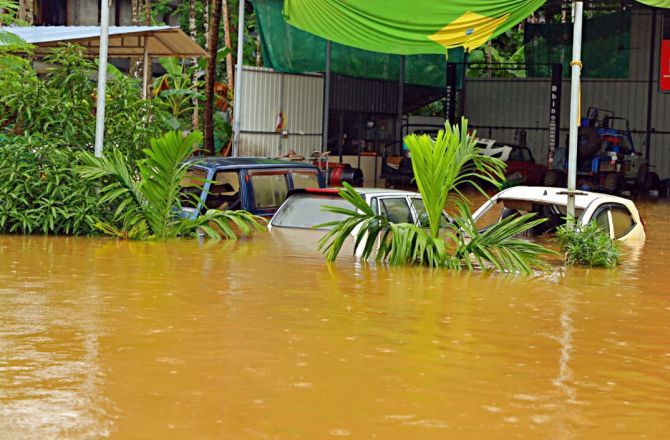 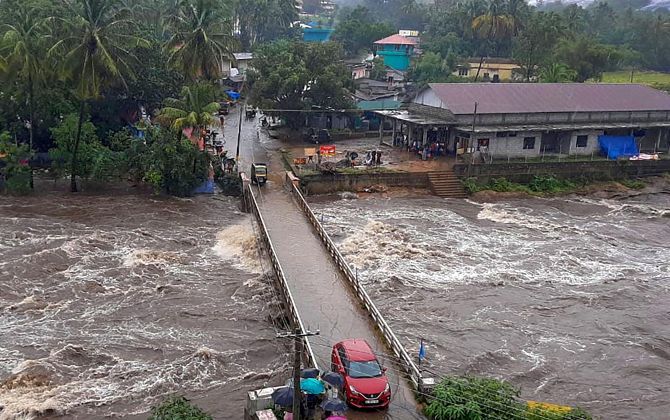 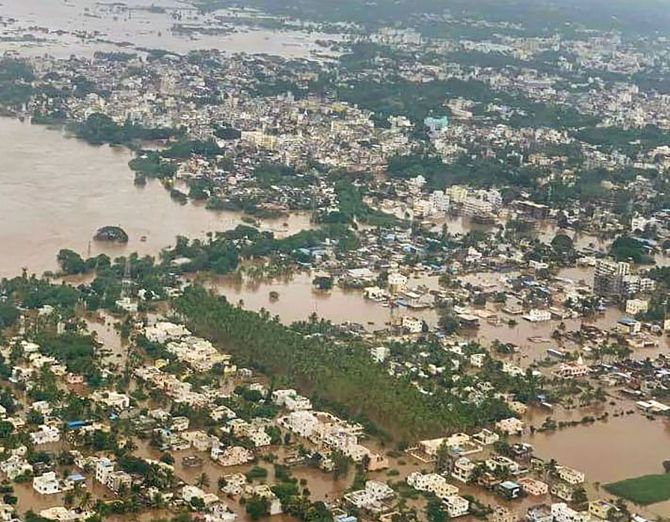 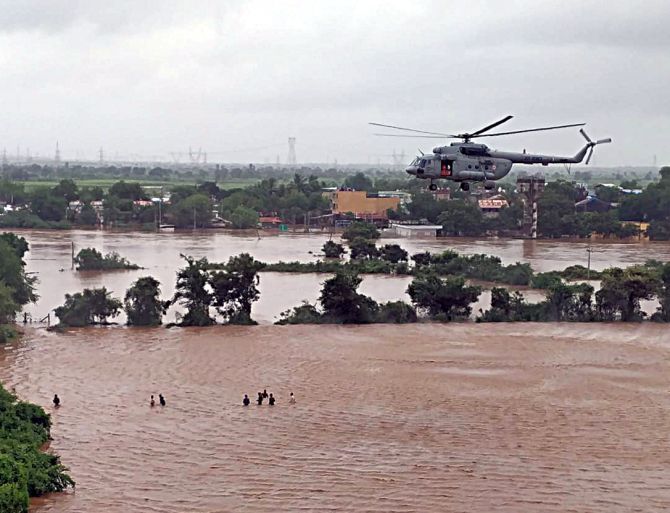 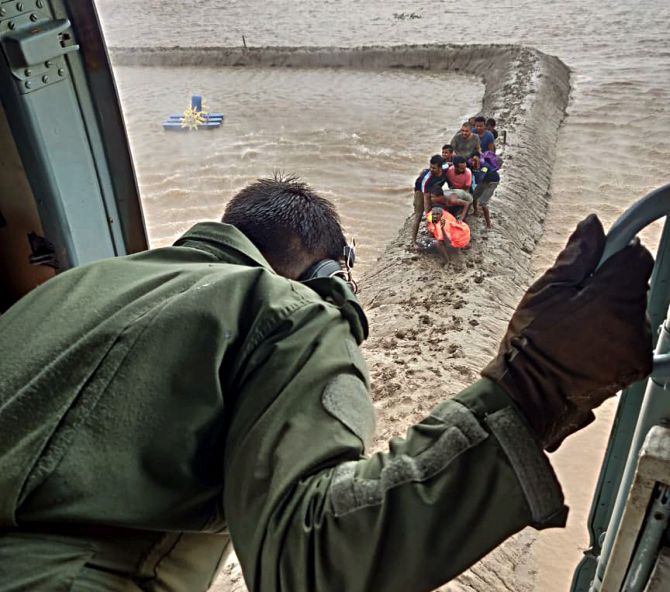 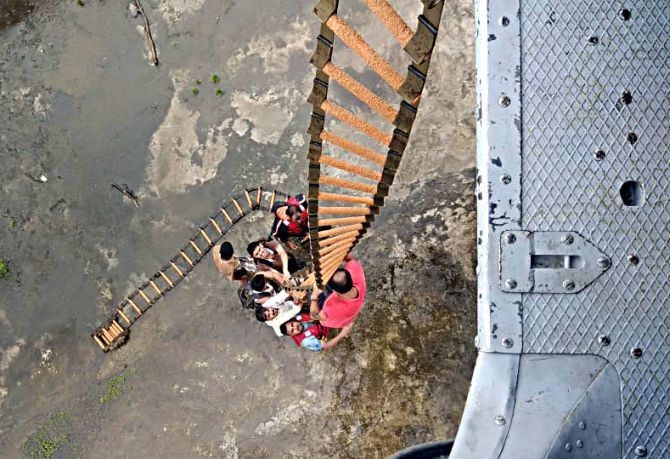 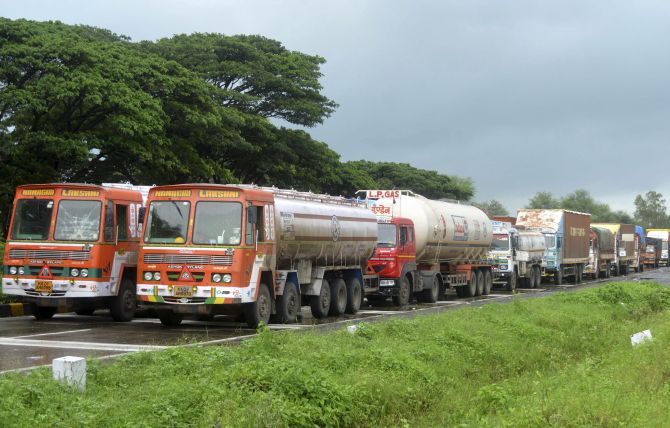 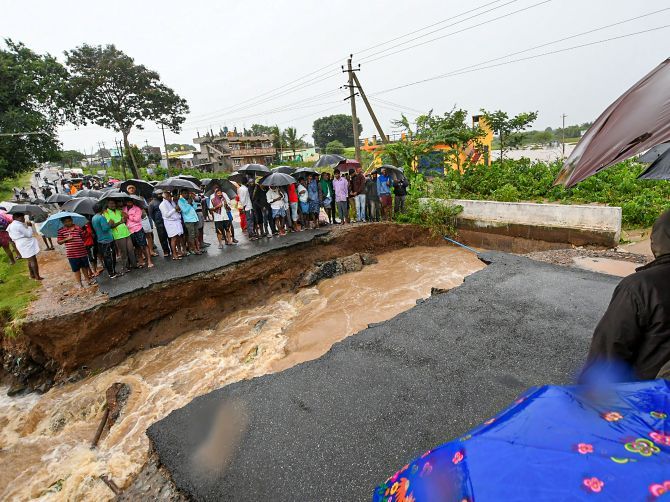 IMAGE: Locals stranded as a part of the road collapsed after water from Kabini reservoir in HD Kote was released following heavy monsoon rainfall in Mysore. Photograph: PTI Photo 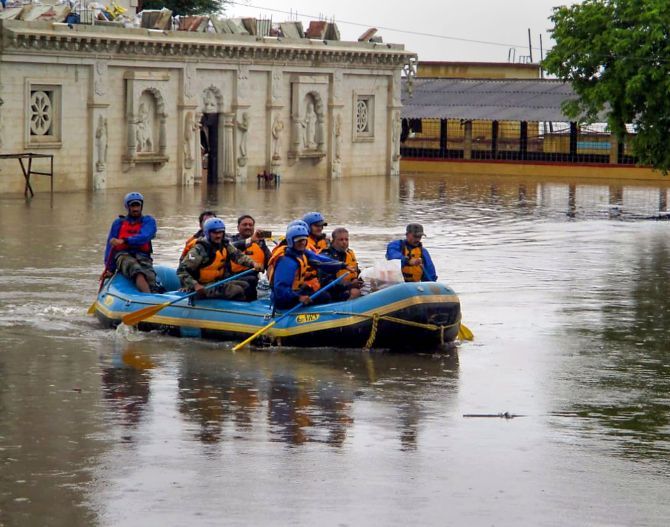 IMAGE: A rescue team moves through the water during coordinated relief and rescue operations by Army Forces in flood-affected areas of Masaguppi village in Belgaum district. Photograph: PTI Photo 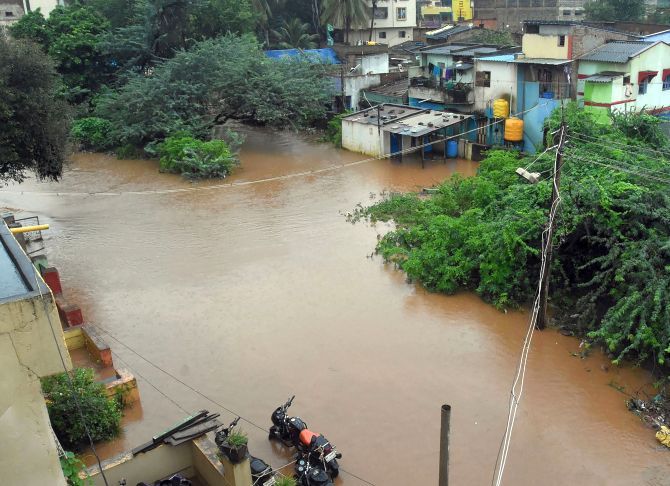 IMAGE: A view of a flood-affected area due to overflow of a water channel following heavy monsoon rain in Hubballi district. Photograph: PTI Photo 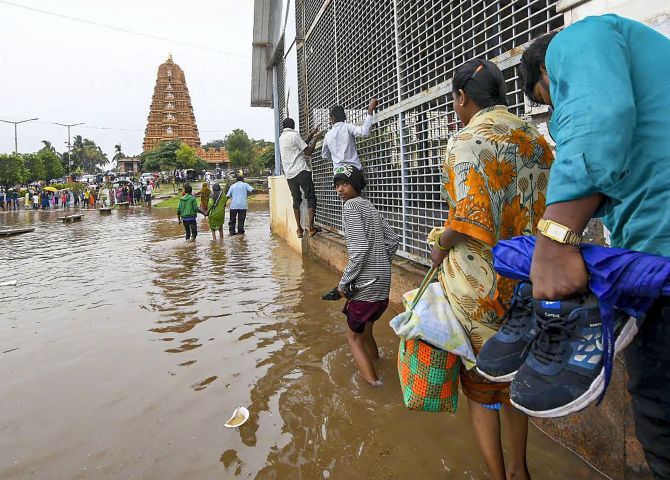 IMAGE: A view of over 150 years old railroad submerged in floodwater following discharge of water from Kabini dam after overflow in Kapila river near Sri Srikanteshwara temple, on Mysore-Nanjangud road. Photograph: PTI Photo

IMAGE: Officials conduct search for bodies washed away due to incessant rainfall in flood-hit areas, at Meppadi in Wayanad. Photograph: / Rediff.com 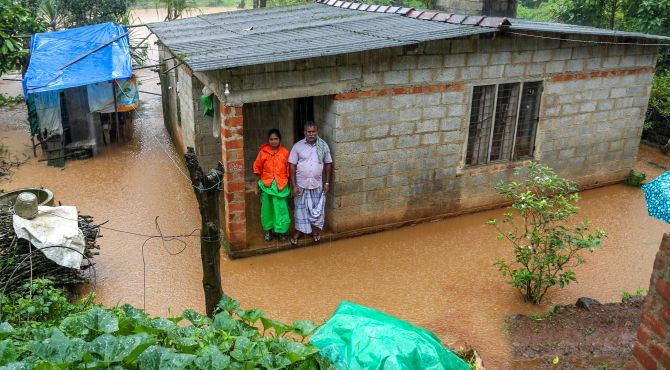 IMAGE: Villagers stranded at their home due to incessant rainfall in flood-hit area of Thankamani in Idukki district of Kerala. Photograph: PTI Photo 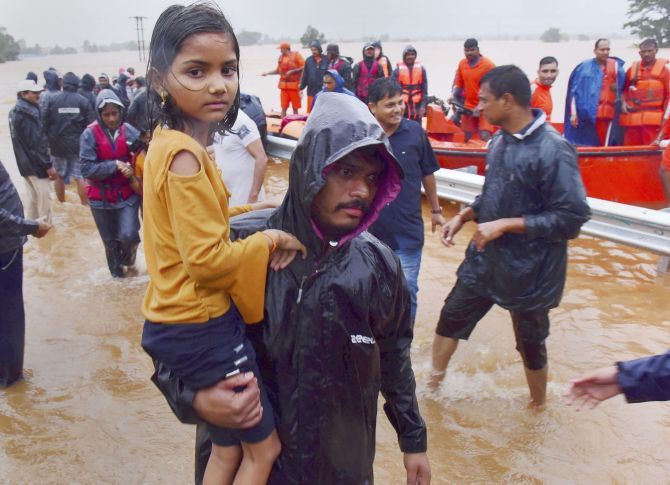