A five-storey under-construction building collapsed in Ghaziabad on Sunday, killing at least one person and injuring several others, officials said. The building was located in the Akash Nagar area of the Masuri police station limits.

The National Disaster Response Force personnel were pressed into service soon after the incident and rescue and search operations were underway, police said.

“So far, we have pulled out one dead body and rescued one person trapped in the debris,” an NDRF official said.

The Ghaziabad Police tweeted that some labourers were rescued and sent to a hospital for treatment. 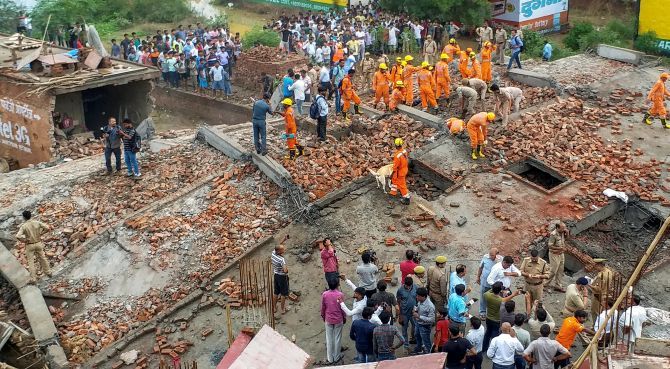 IMAGE: The building was located in the Akash Nagar area of the Masuri police station limits. Photograph: PTI Photo

There was no report of more people being trapped in the collapsed structure, it said.

An Uttar Pradesh government spokesperson said in Lucknow, “Chief Minister Yogi Adityanath has directed the district magistrate and the senior superintendent of police of Ghaziabad to visit the site of building collapse and take immediate action for rescue, along with NDRF personnel.”

Adityanath also asked the district authorities to lodge an FIR and take action against the guilty.

The incident comes within a week of a six-storey under-construction building having collapsed on another five-storey building in Greater Noida.

The twin-building collapse in Shahberi village had claimed nine lives, including that of a toddler and two women.