Fire breaks out at ONGC plant in Navi Mumbai; 4 killed

Four people were killed and three seriously injured when a fire broke out at an oil and gas processing plant of Oil and Natural Gas Corp at Navi Mumbai township, a top official and the police said. 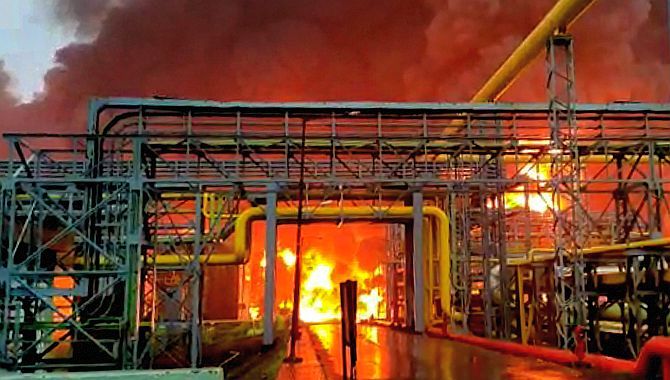 Those killed include three personnel of the Central Industrial Security Force, which is responsible for the security of the Uran plant of ONGC.

The fourth was an employee of ONGC.

Oil production was not impacted by the fire but ONGC diverted natural gas produced from fields in the Arabian Sea to a similar processing facility at Hazira in Gujarat.

"A fire was reported at around 7.15 am this morning at stormwater drainage unit of the Uran plant possibly due to a gas leak. By 9.30 am the fire was brought under control. Unfortunately, we lost four precious lives in the accident," Oil Minister Dharmendra Pradhan said in New Delhi.

He asserted that there was no crisis and things were under control.

The Uran facility of ONGC receives and processes about 12.5 million tonnes per annum of crude oil and about 11.5 million standard cubic meters per day of natural gas and associated condensate from fields in the Arabian Sea.

The facility extracts value-added products such as LPG, C2/C3, and naphtha before supplying crude oil to refineries and natural gas to downstream consumers.

Officials said almost half of the total revenue of the Uran plant comes from the sale of LPG.

Following the blaze, thick smoke engulfed the area, the police said, adding that they appealed to people staying in villages in the plant's vicinity not to panic, and assured things were under control.

The victims died during a blast while they were trying to check gas leakage at the site, a senior CISF official said.

The mishap took place around 6.47 am in the ONGC's processing plant at Uran town, located around 50 km from here, a police official said.

Four people were killed and three others injured in the mishap," a senior police official said.

The injured persons were admitted to a nearby hospital for treatment, she said. 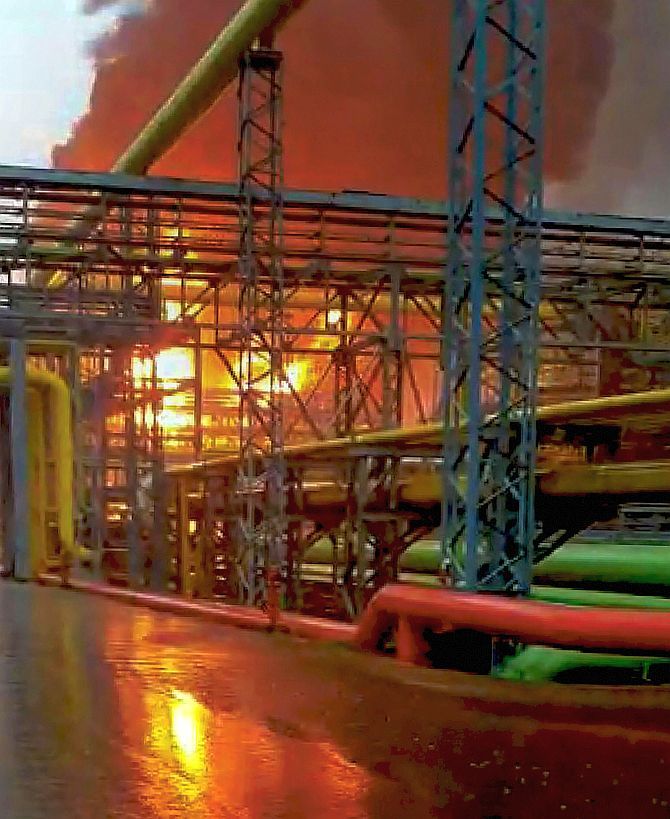 At least 22 fire brigade tenders, including those of the ONGC, Jawaharlal Nehru Port Trust, Reliance Group, Navi Mumbai civic body and the Maharashtra Industrial Development Corporation at Taloja, were rushed to the spot.

Earlier, in another tweet, it said, "A fire broke out in stormwater drainage early morning today in Uran oil & gas processing plant. ONGC fire services & crisis management team immediately pressed into action. Fire is being contained. No impact on Oil processing. Gas diverted to Hazira Plant. The situation is being assessed."

The exact cause of the fire was yet to ascertained.

According to Singh, a CISF fire station was informed in the morning about gas leakage near the LPG plant of ONGC.

The CISF personnel and others then rushed to the site and detected leakage.

"They managed to close the valve and were observing if there was any other leakage, but there was a blast and all the three CISF personnel along with ONGC DGM died," she said, adding that the blast took place in the crude handling plant of the ONGC.

The CISF fire team continued with fire fighting and managed to control the blaze.

"Because of the alertness and dedication of the CISF personnel, major damage to the entire plant and township was averted. The CISF personnel sacrificed their lives in the line of duty," Singh said.

Meanwhile, the police said there was nothing to worry and asked people staying near the plant to stay calm.

"The situation is under control and we appeal to the villagers staying nearby not to panic," a senior police official said.

ONGC, the largest crude oil and natural gas company in the country, in a statement said strong smell of hydrocarbon was reported at 0647 hrs and fire safety measures were initiated immediately.

"Major fire incident occurred at 0655 hrs. All out efforts were made to control the fire and fire was brought under control by 0855 hr," it said adding fire was completely extinguished by 1000 hrs.

Three CISF fire personnel who had come along with fire tender and Resident Production Superintendent succumbed to fatal injury.