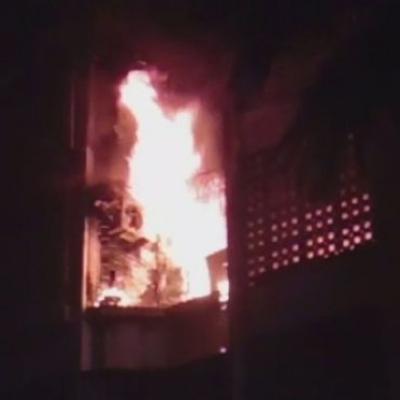 Four people, including two children died and five were seriously injured after an upper floor of a residential building in suburban Marol caught fire in Mumbai on Thursday, an official said.

"Mumbai Fire Brigade got call at 2.10 am about fire at the fourth floor of Ground plus Mamoon Manzil building at Marol in Andheri East. Our fire brigade personnel along with the fire fighting system and ambulance reached at the spot at 2.34 am and swung into action to douse the fire," said an official from Disaster Management Unit of BMC.

"Firemen covered the fire from all side at 4.20 AM. A total of nine people were injured of which four were declared brought dead by the nearby hospital," said an official from Disaster Management Unit of BMC.

He said that five people have received burn injuries and are admitted in Holy Spirit hospital.

Their condition is stable, he added.

The people who were dead were identified as Sakina Kapasi, Mohin Kapasi, Tasleem Kapasi and Dawood Kapasi.

The cause of fire is not known yet and will be ascertained after an investigation into the incident, the official said.