Routes connecting Delhi to Ghaziabad and Noida via Ghazipur and Chilla borders remained partially closed on Monday due to the farmers' protest against the Centre's agricultural reforms, the traffic police said. 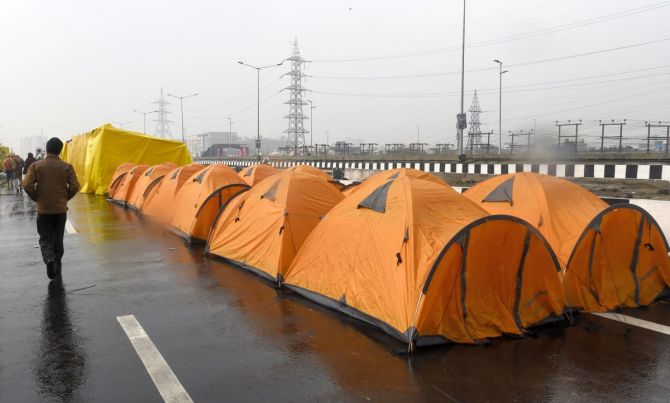 They advised commuters to take alternative routes for coming to Delhi via Anand Vihar, DND, Bhopra and Loni borders.

Farmers from different states have been camping at various border points of Delhi for 40 days now to demand the repeal of the three farm laws enacted in September and a legal backing for the minimum support price.

The farmers had a difficult morning on Sunday as overnight rains left their tents waterlogged, firewood and blankets soaked, and intensified the cold.

However, the farmers have said the weather will not dampen their spirit and they will continue the protest till their demands are met.

Since the farmers arrived at the national capital's borders in late November, the Delhi Traffic Police has been posting alerts on its official Twitter handle to inform commuters about road closures across the city.

In a series of tweets on Monday, the traffic police said Singhu, Auchandi, Piau Maniyari, Saboli and Mangesh borders are closed for traffic movement.

"The Chilla and Ghazipur borders are closed for traffic coming from Noida & Ghaziabad to Delhi because of farmer protests. Please take alternate route for coming to Delhi via Anand Vihar, DND, Bhopra & Loni Borders," it said. 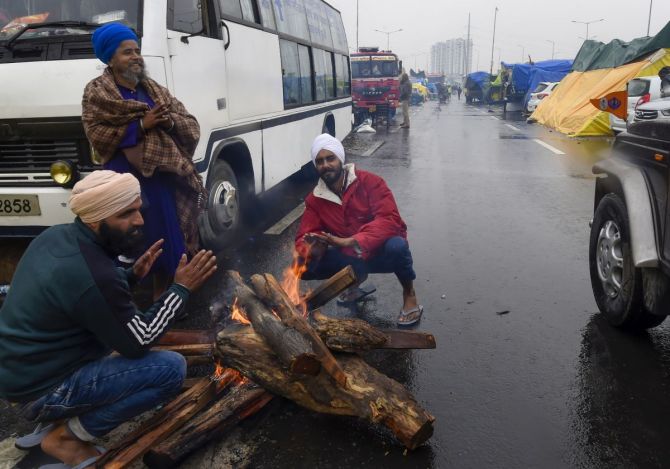 IMAGE: Farmers sit near a bonfire to keep themselves warm after heavy rain during their ongoing protest against the new farm laws at Ghazipur border in New Delhi. Photograph: Kamal Singh/PTI Photo

"Jhatikara Border is open only for LMV (Cars/Light Motor Vehicles), two wheelers and pedestrian movement," it said in another tweet.

According to the traffic police, people travelling to Haryana can take the routes via Jharoda (only single carriageway), Daurala, Kapashera, Badusarai, Rajokri NH-8, Bijwasan/Bajghera, Palam Vihar and Dundahera borders.

After five rounds of inconclusive talks, the government and 40 farmer unions reached some common ground during the sixth round of negotiations on December 30 to resolve protesting farmers' concerns over rise in power tariff and penalties for stubble burning.

However, the two sides remained deadlocked over the main contentious issues of the repeal of the three farm laws and a legal guarantee for MSP.

The seventh round of talks between the government and farmer unions is scheduled to be held on Monday.