Leaders of about a dozen non-BJP parties closed ranks on Friday at a mega rally in New Delhi by protesting farmers in a show of unity, as thousands of farmers marched through the streets chanting slogans to press for their demands like debt relief and remunerative prices for their produce. 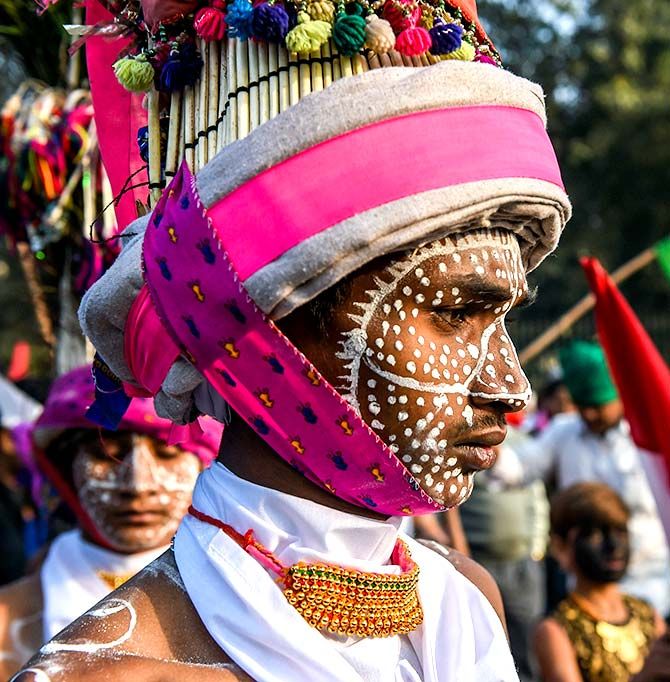 IMAGE: A farmer marches towards Parliament during the march in which farmers are asking for debt relief and remunerative prices for their produce. Photograph: Atul Yadav/PTI Photo

As Congress chief Rahul Gandhi, Delhi Chief Minister Arvind Kejriwal, Communist Party of India-Marxist chief Sitaram Yechury and Nationalist Congress Party supremo Sharad Pawar and other leaders shared the stage and backed the demands, the farmers started their march towards Parliament from Ramlila grounds around 10.30 am amid heavy policy deployment, only to be stopped at the Parliament Street police station.

"The farmers are not seeking a free gift from the government," Gandhi thundered at the rally in Jantar Mantar. The farmers had gathered from various states and camped at the Ramlila grounds overnight.

Traffic in many parts of the capital was affected due to the march.

Banded under the AIKSCC, which claims to be an umbrella body of 207 organisations of farmers and agricultural workers, many protesters arrived in New Delhi on Thursday, on trains, buses and other modes of transport.

A group of farmers from Tamil Nadu staged a 'nude protest' by lying in front of the stage after placing bones and human skulls on their bodies.

About 1,300 members of the National South Indian River Interlinking Farmers Association reached the national capital in the early hours of Thursday and were carrying seven skulls and bones, said their leader P Ayyakannu.

He said the skulls and bones were of the farmers who committed suicide.

Samajwadi Party leader Dharmendra Yadav, CPI leader S Sudhakar Reddy, AAP MP Sanjay Singh and former Jammu and Kashmir chief minister Farooq Abdullah were among other leaders who joined the farmers at Jantar Mantar, which is less than a kilometre from Parliament.

While Gandhi said leaders of all opposition parties stand united with farmers in ensuring their good future and called for a farm loan waiver, Kejriwal alleged that Prime Minister Narendra Modi has "stabbed farmers in the back" by not fulfilling the promises made to them.

Gandhi said no one can silence the voice of farmers and youth while asserting that if the government insults them, then they will ensure its removal. 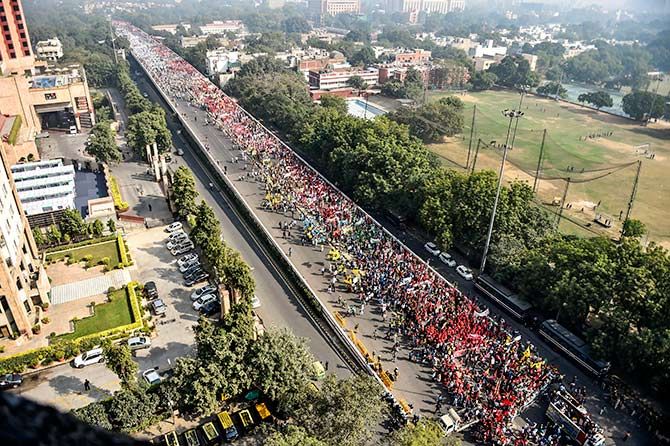 "The farmers are not seeking a free gift from the government by asking for a farm loan waiver but are only asking for what is due to them," he said, and asked, "If this government can waive Rs 3.5 lakh crore loans of 15 big industrialists, why can't the loans of crores of farmers in the country be waived."

Kejriwal said the government made lot of promises to farmers in the 2014 elections, but it has not fulfilled them. "And, by not implementing the Swaminathan Commission report, Modi ji has stabbed the farmers in their back (kisano ke peeth mey chhura bhonka hai)."

The report is aimed at working out a system for food and nutrition security, sustainability in farming system, enhancing quality and cost competitiveness of farm commodities. 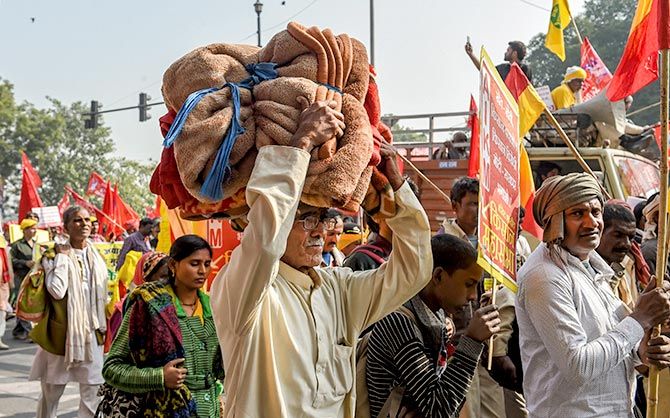 IMAGE: The AIKSCC has claimed that the two-day rally will be one of the largest congregations of farmers in Delhi. Photograph: Atul Yadav/PTI Photo

Yechury reminded the gathering that this was the "same police station (Parliament Street police station) where Bhagat Singh was taken into custody for throwing a bomb (in the Legislative Assembly)".

Swaraj India leader Yogendra Yadav said the protest is a historic development as not only farmers across the nation have assembled under one platform but also it has enjoyed support from all sections of society.

Pawar said the condition of farmers in the country needs to be changed but the government is "not sympathetic" towards their plight. Narmada Bachao Andolan activist Medha Patkar alleged that the government from the "very beginning has been adopting pro-corporate policies and not a single major initiative for farmers has been launched by it".

Abdullah said the farmers' protests Delhi is a "wake up call" for the government, as he urged people to join hands to overthrow the BJP government in the upcoming Lok Sabha elections.

The AIKSCC claimed the two-day rally is one of the largest congregation of farmers in Delhi. Five gurdwaras in the Delhi regionextended their help to the farmers. Also, students from various universities turned out in large numbers to lend support to the farmers.

The protest also saw participation of a number of women farmers who travelled from various parts of the country.

Atul Anjaan, national secretary of All India Kisan Sabha, alleged that the "apathetic attitude" of the Modi government towards farmers has led to the distress in the agriculture sector and the situation is worsening. 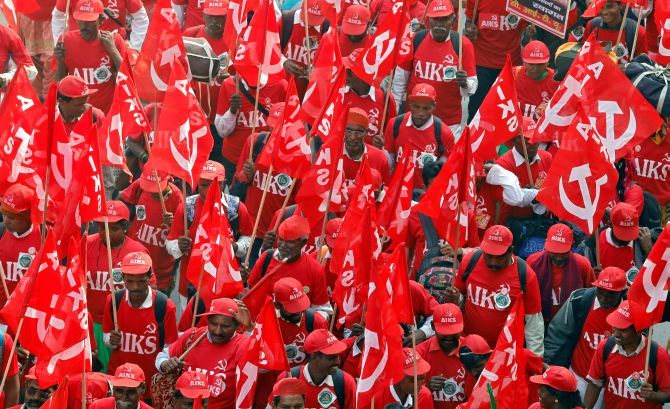 IMAGE: A sed of red flags could be seen marching towards Parliament as farmers banded under the All India Kisan Sangharsh Coordination Committee began their protest on Friday. Photograph: Anushree Fadnavis/Reuters

Volunteers, including doctors, lawyers, professors and artists, came out to help the farmers. Around 600-700 volunteers of a solidarity group 'Nation For Farmers' marched with the protesters from the four assembly points.

The AIKSCC was formed under the aegis of All India Kisan Sabha and other Left-affiliated farmers’ bodies in June, 2017, following protests by farmers in states such as Maharashtra and Madhya Pradesh for debt relief and remunerative prices.