'We're not going anywhere': Farmers as they complete 6 months at Delhi borders

Vowing to continue their stir till the agri laws are repealed, agitating farmers marched with black flags, burnt effigies and shouted anti-government slogans at Tikri, Singhu and Ghazipur protest sites on Delhi borders as well as in several parts of Punjab and Haryana to mark the completion of six months of their agitation. 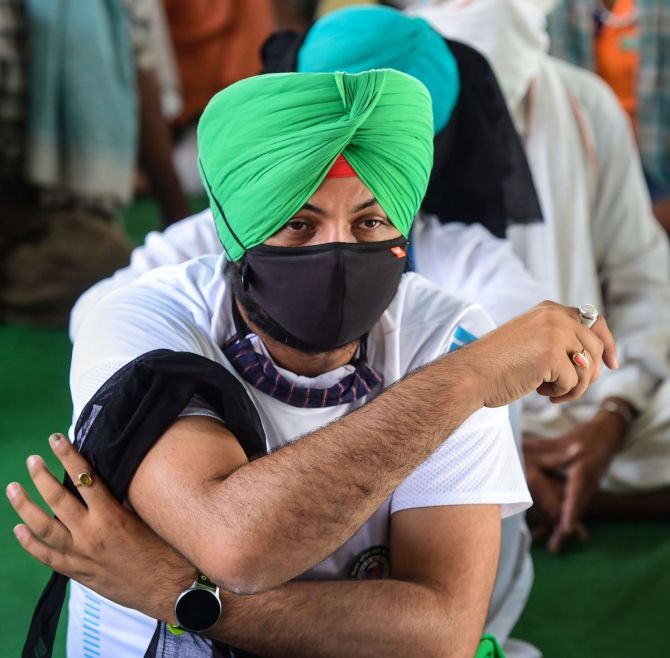 IMAGE: A farmer wears a black badge during a protest against the farm laws marking a Black Day, at Ghazipur border in New Delhi. Photograph: Kamal Kishore/PTI Photo

Black flags were put atop houses and on vehicles by people and leaders of opposition parties to observe 'Black Day' on Wednesday on a call by Samyukta Kisan Morcha, an umbrella outfit of farmer unions that is spearheading the stir against the laws that were enacted in September last year by the Centre.

Authorities maintained a tight vigil and urged people not to gather in view of the ongoing COVID restrictions.

A brief ruckus was reported at the Ghazipur protest site on the Delhi-Uttar Pradesh border where police tried to stop protesters from burning an effigy.

If laws can be made amid the COVID pandemic, why cannot they be repealed, Bharatiya Kisan Union leader Rakesh Tikait said while addressing hundreds of protestors at the site where COVID-19 protocols on social distancing and face masks were largely amiss.

"The movement will continue for a long time," the BKU leader said. SAD chief Sukhbir Singh Badal and Congress MP Digvijaya Singh were among the leaders who raised black flags at their residence and urged the central government to accept the demand of protesting farmers.

At the Singhu border, protestors gathered at the Kajaria Tiles office, held meetings, and took out a march towards the stage. Protesters donned black turbans and dupattas and burnt an effigy.

Several rounds of talks between farmers and the government have failed to break the deadlock over the three central laws.

A government panel had met farmers leaders on January 22. There have been no talks between the two sides since January 26 when the farmers' tractor rally in the national capital turned violent.

Senior farmer leader Avtar Singh Mehma said that black flags have been hoisted not only at the protest sites but also in villages in Haryana, Punjab and Uttar Pradesh, adding that villagers have put up black flags atop their houses as well as on their vehicles.

"This day is to reiterate the fact that it has been six months since we have been protesting, but the government, which also completes seven years in office today, is not listening to us," said Mehma. In Punjab, protests were held at many places including Amritsar, Muktsar, Moga, Tarn Taran, Sangrur and Bathinda.

In Sirsa, a group of farmers holding black flags gathered in large numbers on Barnala road

Samajwadi Party supremo Akhilesh Yadav on Wednesday claimed that people of the country were angry over the insult meted out to protesting farmers due to the government's "ego".

"Farmers who give blood for every food grain that reaches us are observing 'black day' today. Every citizen of the country is angry with the insult meted out to farmers due to the ego of the BJP government," Yadav said in a tweet in Hindi. Tamil Nadu Chief Minister M K Stalin urged the Centre to withdraw the farm laws by accepting the demands of farmers and said his party's poll promise of passing a resolution against these legislations in the Assembly would be fulfilled.

The NCP took a swipe at the Centre, saying it was under the impression that farmers, who have been agitating at Delhi borders against three agriculture laws for the last six months, would get tired and give up their protest.

On Tuesday, the National Human Rights Commission had issued notices to Delhi, UP, Haryana on the alleged flouting of COVID norms by the protesting farmers.

The Delhi Police too had urged people not to hold gatherings due to the COVID-19 situation and the ongoing lockdown.

Farmer leader Avtar Singh Mehma said that the government shouldn't have introduced the three laws during the pandemic in the first place.

"If the government wants us to go back then it should listen to us and repeal the laws because we are not going anywhere unless our demands are met.

"It is not our hobby to sit in the heat and the cold at the borders. We also want to go back home and be safe," the farmer leader said. Police force has been in deployed at all the border points, including the protest sites of Singhu, Tikri and Ghazipur, since Tuesday.

At Ghazipur, hundreds of farmers led by Tikait converged. A scuffle broke out between protestors and the local police, donning anti-riot gears, who tried to stop them from burning the effigy at the UP Gate below the Delhi-Meerut Expressway.

While many BKU supporters held black flags in their hands, several others had placards that condemned the government and demanded the withdrawal of the contentious laws. Farmers have been camping at Delhi's borders since November 2020 demanding that the Farmers' Produce Trade and Commerce (Promotion and Facilitation) Act, 2020, Farmers' (Empowerment and Protection) Agreement on Price Assurance and Farm Services Act, 2020 and the Essential Commodities (Amendment) Act, 2020 be rolled back and a new law made to guarantee minimum support price for crops.

The government, however, has maintained the three central laws are pro-farmer.

In the wake of the stir, it had offered to suspend the implementation of the laws for 12-18 months which was rejected by the farmer unions.

The Supreme Court had stayed the implementation of the laws and set up a committee to resolve the impasse.