Several trains were cancelled, highways and key roads blocked and many thousands stranded for hours on Monday as a nationwide 10-hour shutdown against the Centre's three agri laws disrupted lives across parts of India, particularly in the north. The 6 am to 4 pm Bharat Bandh, which saw demonstrations and rallies in many places, passed off relatively peacefully with no reports of injuries or serious clashes.

The impact was felt the most around Delhi, Punjab, Haryana and western Uttar Pradesh, the centre of the farm protests, and also in large pockets of Kerala, Bihar, Jharkhand, West Bengal and Odisha. 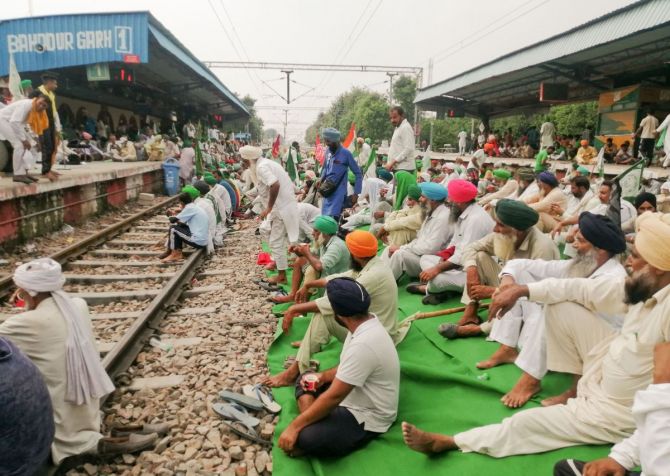 Protesters blocked highways and arterial roads and squatted on tracks in several places from morning as the shutdown called by the Samyukta Kisan Morcha, an umbrella body of 40 farmer unions, got underway. The blockade was lifted at 4 pm.

The SKM claimed in a statement that its call for a shutdown had received an 'unprecedented and historic' response from more than 23 states and not a single untoward incident was reported from anywhere. 'Reports have been pouring in about the overwhelmingly positive and resounding response to the Bharat Bandh call -- to mark 10 months of peaceful protests with rightful demands from the 'annadaatas' of the country,' it said.

The day marks one year since President Ram Nath Kovind gave his assent to the three controversial laws and 10 months since thousands of farmers set up camp at Delhi's border points to voice their protest. 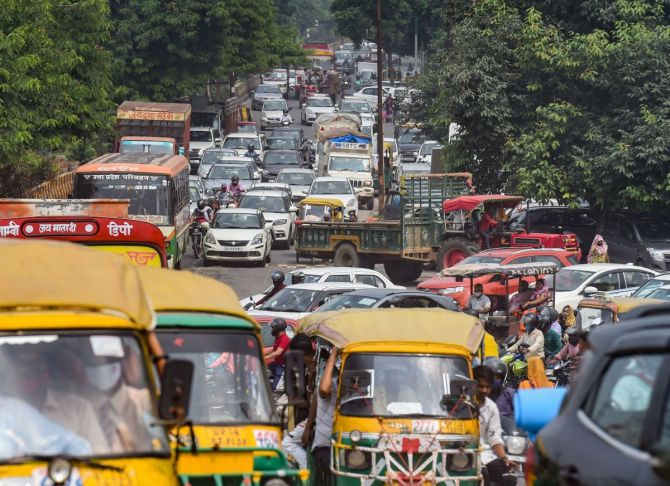 Looking ahead, Bharatiya Kisan Union (BKU) leader Rakesh Tikait said at an online discussion that a solution could only be reached through dialogue and not in the courts.

'I don't know what is going to be the end of this protest but the movement has begun and the country's youth, which often remained away from discussion on farming-related issues, is also joining it,' he said. Tikait also issued a statement to say that the response had shown their protest is a 'pan India' one.

The agitation, he said, can end today if the Centre agrees to a rollback.

Some people may have faced inconvenience, 'which is natural, but they should forget it for just one day in the name of farmers', he added. 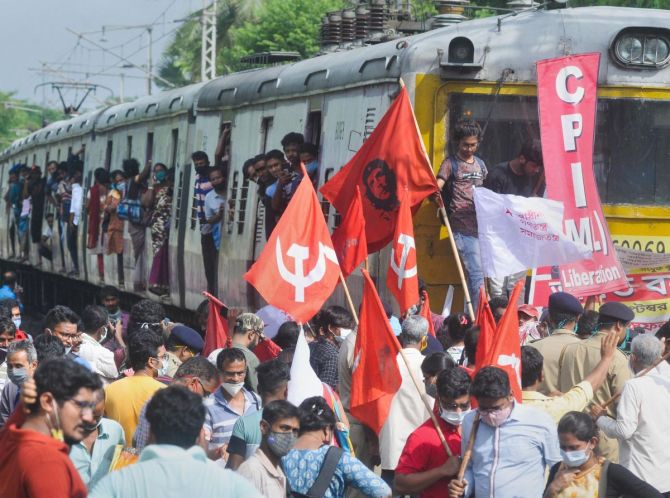 Though life in large parts of India was unhindered by the shutdown, north India felt the pinch with about 25 trains being affected and massive jams that prevented the cross border movement of commuters as well as trucks carrying essentials.

The Delhi-NCR region, including the satellite towns of Gurgaon, Ghaziabad and Noida, where thousands cross the borders each day was particularly hit.

Delhi itself was mostly unaffected, but there was chaos at its borders with traffic snarls that stretched through much of the day and commuters who couldn't get to office, or college or even to that important doctor's appointment. Images of cars waiting to be let through, backed up bumper to bumper as far as the eye could see, told their own story.

While there were instances of unwell patients being let through, among those stuck at the Delhi-Gurgaon border was a man who couldn't make it for his appointment at the Medanta Hospital in Gurgaon.

Farmers blocked other roads leading into the national capital, including at Ghazipur in western Uttar Pradesh. Not far away in Sonipat in Haryana, some farmers squatted on tracks. In nearby Patiala in Punjab, too, members of the BKU-Ugrahan sat on the tracks to register their protest.

Punjab saw a complete shutdown in many places, including Moga where farmers blocked national highways. Farmer leaders from Punjab have, in many ways, spearheaded the year-long protest.

'#I Stand With Farmers & appeal the Union Govt. to repeal the three anti-farmer laws. Our farmers have been struggling for their rights since more than a year & it is high time that their voice is heard,' Punjab's new chief minister Charanjit Singh Channi said in a tweet. According to the SKM, people gathered at more than 500 locations in Punjab to express their support to the bandh.

In neighbouring Haryana, highways in Sirsa, Fatehabad and Kurukshetra were blocked.

There were also reports of farmers squatting on rail tracks at a few places in the two states. 'More than 20 locations are being blocked in Delhi, Ambala, and Firozepur divisions. About 25 trains are affected due to this,' a Northern Railway spokesperson said.

Many non-National Democratic Alliance parties extended support to the bandh.

In West Bengal, life was largely unaffected but Left activists blocked roads and railway tracks in many places.

Images from Kolkata showed protesters swarming a section of a railway track. The ruling Trinamool Congress stayed away but said it supported the demands of the SKM.

Elsewhere in the region, vehicular movement was impacted and shops shut in several places in Jharkhand, including in the state capital Ranchi and Dumka. Road blockades led to congestion on key highways.

In Bihar and Odisha, too, there was a mixed response.

Rashtriya Janata Dal and Communist Party of India members blocked railway lines in Patna, Ara, Jahanabad and Madhepura in Bihar and several roads were closed too but markets were mostly open and offices registered usual attendance.

Most private schools in the state were, however, shut. In Odisha, reports came in of protests at different places, including in Bhubaneswar where demonstrators blocked the track at the Bhubaneswar station.

In Kerala, where the strike was supported by the ruling Left Democratic Front and the opposition Congress-led United Democratic Front, Kerala State Road Transport Corporation bus services were off the road with almost all trade unions in the state taking part.

All emergency establishments and essential services, including hospitals, medical stores, relief and rescue work and people attending to personal emergencies were exempted from the strike. The government and farmer unions have held 11 rounds of talks so far, the last being on January 22, to break the deadlock and end the farmers' protest.

Talks have not resumed following widespread violence during a tractor rally by protesting farmers on January 26.

Farmer groups have alleged the laws will end the 'mandi' and the MSP procurement systems and leave farmers at the mercy of big corporates. The government has rejected these apprehensions as misplaced and asserted that these steps will help increase farmers' income.