An improvised explosive device exploded on a packed underground train at a London station on Friday, injuring at least 22 people in the fifth terrorist attack this year, which Prime Minister Theresa May said was 'clearly intended to cause significant harm'. 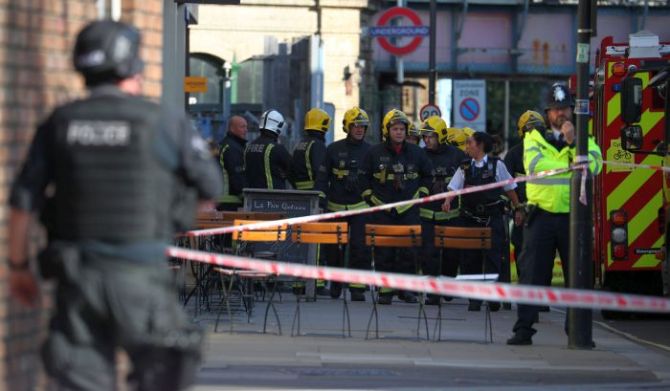 The explosion, on a District Line Tube in the British capital's southwest, occurred as the train pulled into Parsons Green station. Commuters said they heard a bang and saw a fireball inside the carriage when the ‘bucket bomb’ exploded.

Several people suffered facial burns, some reportedly were even trampled in the rush to escape. But none of the injuries were life threatening.

Pictures of a white bucket on fire inside a supermarket bag, with wires trailing on to the carriage floor of the train went viral on social media.

Investigators were examining what appears to be a circuit board recovered from the scene, news reports said. 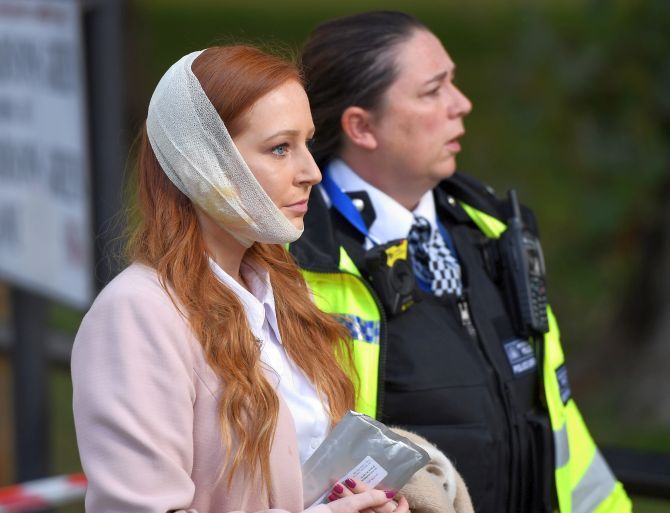 Scotland Yard said it was a terror incident and they ‘assess’ an IED triggered the blast. A hunt was on for a suspect the British media labelled as the ‘bucket bomber’.

Some reports indicated that the suspect was identified after investigators reviewed the CCTV footage at the station.

This is the fifth terrorism incident in the UK this year.

But it's the only one in 2017 in which nobody has died. The previous four saw 36 people killed. 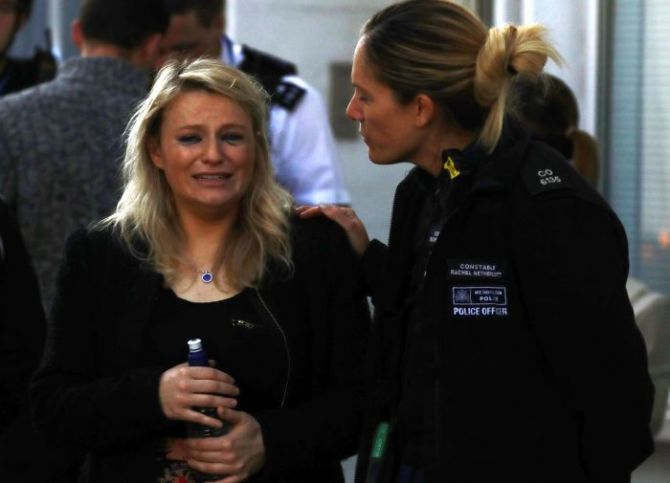 IMAGE: Several passengers were injured, some of them suffering facial burns. Many of them with scorched faces and hair, ran off screaming. Photograph: Kevin Coombs/Reuters

The London Ambulance Service said 18 people have been taken to hospital, and four more reached there on their own.

Most of the injured people suffered burn injuries.

Assistant Commissioner Mark Rowley said more police would be deployed in London, particularly on the transport network, but refused to say whether anyone had been arrested.

Prime Minister May said the incident was a ‘cowardly’ act ‘clearly intended to cause significant harm’. IMAGE: Armed policemen quickly arrived at the scene and halted services on the Tube after the explosion. Photograph: Hannah McKay/Reuters

Addressing the media after chairing an emergency response COBRA committee meeting at Downing Street, May said the UK's terror threat level remains unchanged for now, at ‘severe’ -- the second highest.

“That means that a terrorist attack is highly likely. But this will be kept under review as the investigation progresses. The public should go about their daily lives but remain vigilant,” she said.

"We do need to ensure that we are dealing with, not just the terrorist threat but with the extremism and the hate that can actually incite that terrorism." the prime minister added.

The police later in an updated statement said an area of 50 metres in radius around the station has been evacuated as a precaution in case the bomb left on the train remains unstable. Mayor Sadiq Khan said London ‘utterly condemns the hideous individuals who attempt to use terror to harm us and destroy our way of life’, and urged Londoners to remain calm and vigilant.

Scotland Yard's counter-terrorism squad, SO15, has taken the lead in the investigation from the transport police.

‘Deputy Assistant Commissioner Neil Basu, the senior national coordinator for counter-terrorism policing, has declared it a terrorist incident,’ the police said in a statement earlier in the day.

‘The Metropolitan Police Service and British Transport Police attended the scene, along with colleagues from the London Fire Brigade and London Ambulance Service. At present we are aware of a number of people who have suffered injuries,’ it said, adding that the station remains cordoned off and ‘we are advising people to avoid the area’. 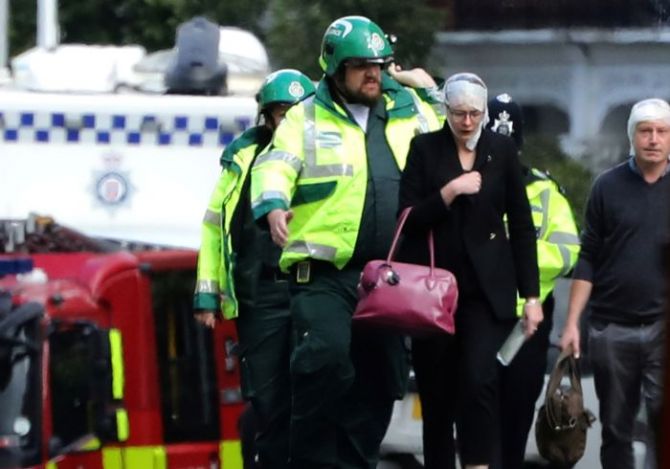 IMAGE: An injured woman is led away after an incident at Parsons Green underground station in London on Friday. Photograph: Luke MacGregor/Reuters

‘My thoughts are with those injured at Parsons Green and emergency services who are responding bravely to this terrorist incident,’ May had tweeted soon after the incident.

Eyewitnesses outside the station reported seeing people with facial injuries. Many have been told to stay in lockdown as police evacuated the area and placed a wide zone under a police cordon.

Passenger Chris Wildish told the BBC that he saw a bucket in a supermarket bag with ‘low-level flames coming out of it’ by the door of the rear carriage.