At least 13 workers were killed and 58 others injured in chain explosions of nitrogen gas cylinders at a chemical factory in Dhule district of Maharashtra on Saturday morning, police said. 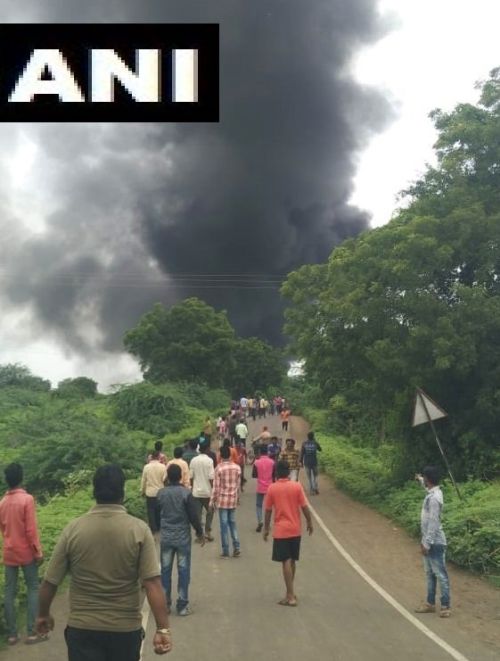 Prima facie, a leaking chemical from a barrel triggered fire which led to serial explosions in the factory in Waghadi village in Shirpur taluka around 9:45 am, said a senior police officer.

"Thirteen workers have been killed while 58 others were injured in the explosion of nitrogen gas cylinders at the chemical factory," he said.

At least 100 workers were present in the factory at the time of the incident, he added.

The officer said the rescue operation at the spot is still going on while the blaze has been brought under control.

The deafening sound of explosions caused panic in the vicinity prompting many people to rush out of their houses.

Maharashtra Chief Minister Devendra Fadnavis has expressed grief over the loss of lives in the explosion and announced Rs 5 lakh compensation to the kin of the deceased.

The officer said that presence of a number of nitrogen gas cylinders and barrels containing chemicals in the factory increased the severity of the blasts.

"Prima facie, a fire was triggered due to leak of chemical from a barrel which spread to cylinders causing the blasts," the officer said.

Police initially suspected the boiler of the company has exploded, but have found it to be intact.

The injured have been admitted at the Dhule civil hospital and Shirpur Cottage Hospital.

All deceased have been identified.

A contingent of Riot Control Police has been deployed at the spot along with local police personnel.

Meanwhile, Union Home Minister Amit Shah spoke to Fadnavis and took stock of the situation arising out of the explosion at the chemical factory.

During the telephonic conversation, the chief minister conveyed to the home minister that the state government has been doing its best to help those who are in distress.

"Anguished to learn about the loss of lives due to explosion at a chemical factory in Dhule, Maharashtra. Have spoken to CM @Dev_Fadnavis, state govt is doing everything possible to assist the people in need. My condolences with the bereaved families. May injured recover soon," Shah tweeted.