PIX: Eid celebrated across the country with fervour

People came out of homes in large numbers, offered namaaz at mosques, greeted each other with hugs and exchanged food and gifts across the length and breadth of India to celebrate Eid-ul-Adha on Sunday, undeterred by the recent surge in coronavirus cases. President Ram Nath Kovind greeted people through a tweet in Urdu, asking them to dedicate themselves to the service of humanity.

"The festival of Eid-ul-Adha teaches sacrifice and service to humanity. On this auspicious occasion, let us dedicate ourselves to the service of humanity and pledge to work for the prosperity and comprehensive development of the country," the President tweeted. He also posted a similar Eid greeting in Hindi.

Prime Minister Narendra Modi, in his greetings, wished that the festival inspired everyone to work towards furthering the spirit of collective well-being and prosperity for the good of humankind.

Modi tweeted, "Eid Mubarak! Greetings on Eid-ul-Adha. May this festival inspire us to work towards furthering the spirit of collective well-being and prosperity for the good of humankind." IMAGE: Women devotees offer prayers on the occasion of Eid al-Adha, at Hazratbal Shrine on the banks of Dal Lake, in Srinagar, July 10, 2022. Photograph: Umar Ganie for Rediff.com

The Border Security Force Gujarat Frontier exchanged sweets and greetings with Pakistan Rangers at the international border along Gujarat and Rajasthan.

An official release said the BSF exchanged sweets with its Pakistan counterpart at the international border in Kutch and Banaskantha districts in Gujarat as well as Munabao, Gadra, Somrar, Kelnore and Varnahar in Rajasthan's Barmer district.

The two forces share sweets as a goodwill gesture on festivals of both nations, most notably Diwali and Eid, officials said. 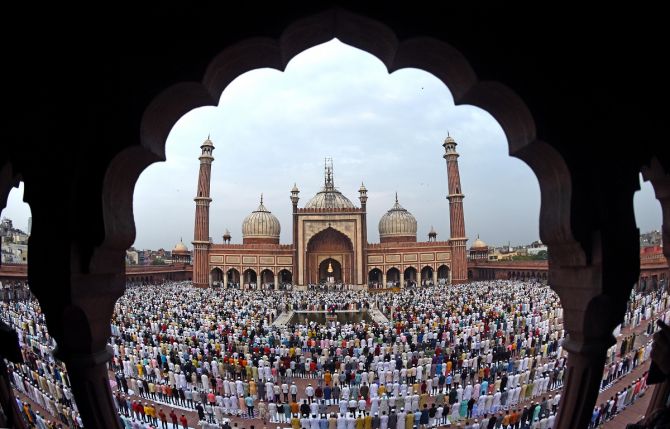 Eid-ul-Adha, the celebration of Prophet Ibrahim's sacrifice, was celebrated peacefully across Kashmir with people gathering at mosques in large numbers to offer prayers. The biggest such assembly was at the Hazratbal Shrine, where more than 45,000 people gathered for prayers.

Smaller gatherings were reported at all Muslim places of worship across the valley, except for the historic Jamia Masjid in old city. The authorities refused permission to the Anjuman Auqaf Jamia Masjid to hold prayers at 9 am. 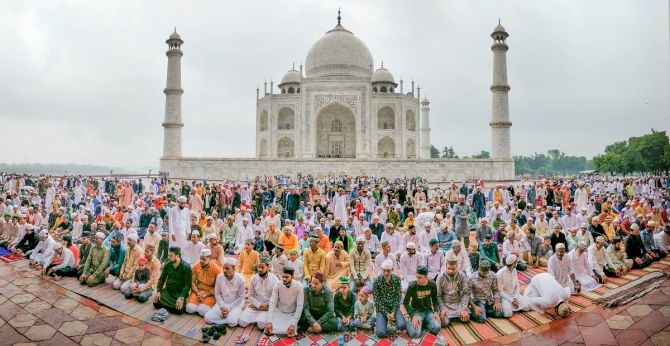 Thousands of sheep, goats and other animals were sacrificed across the valley in line with the tradition, officials said.

"Greetings on the auspicious occasion of Eid-ul-Zuha. The festival is an occasion to reaffirm our faith in unity of humanity & to be charitable towards poor & disadvantaged. May this festival strengthens the bonds of brotherhood & bring peace, happiness & joy for everyone. Eid Mubarak," Lieutenant Governor Manoj Sinha tweeted.

Eid-ul-Adha or Bakrid is known for its custom of sacrificing an animal to Allah.

At Aishbagh Eidgah in Uttar Pradesh capital Lucknow, people speaking during khutbe -- a speech before namaaz -- raised concerns about global warming and later offered a special prayer for rains.

Maulana Khalid Rashid Farangi Mahali, the jead of Islamic Centre of India and Shahar Qazi, told PTI that people prayed for peace and harmony in the country across several mosques of the Aishbagh Idgah. IMAGE: A policeman interacts with Muslim devotees gathered to offer prayers on the occasion of Eid al-Adha, at Badi Eidgah in Kanpur, July 10, 2022. Photograph: PTI Photo

Maulana Rashid said the Centre's advisory asking people to not share any pictures or videos of the sacrifice on social media was widely heeded to.

Considering the tense environment in the state of late, the authorities had made elaborate security arrangements.

Lucknow Police Commissioner D K Thakur said namaaz was held in a peaceful environment and no trouble was reported from anywhere. Several districts of the state had erupted with violent protests on June 3 and June 10 -- both Fridays -- when people came out on the streets denouncing a comment made against the Prophet by former BJP spokesperson Nupur Sharma.

Assam Governor Jagdish Mukhi greeted the people of the state, saying the festival epitomises love, sacrifice and service to humanity. 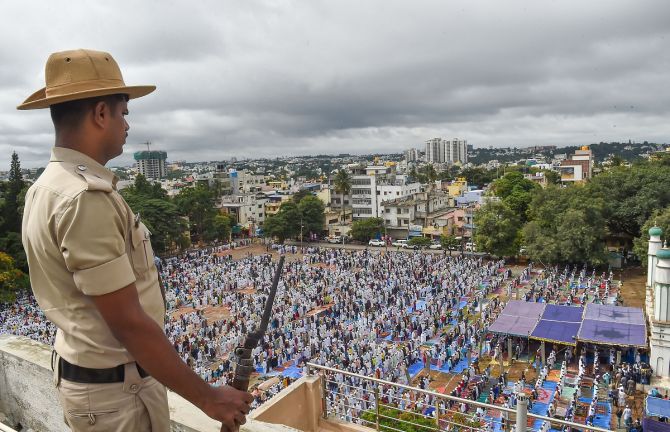 Chief Minister Himanta Biswa Sarma, too, extended his wishes to the people.

The people of the community, mainly in state capital Kohima and commercial hub Dimapur, thronged Eidgahs and hugged each other and wished 'Eid Mubarak'. They were also seen extending alms to the needy outside the mosques.

Down south, hundreds of Muslims in Karnataka's coastal districts of Dakshina Kannada and Udupi participated in namaaz held at various mosques. Continuing rains in the coastal areas over the last one week did not dampen the celebrations. 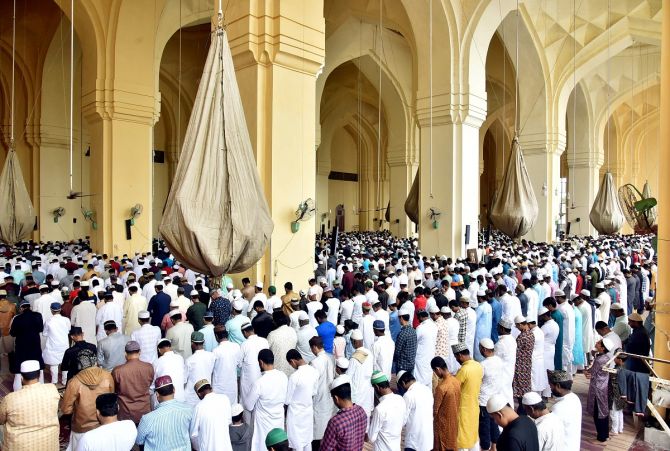 The celebrations come even as the country has been reporting more than 10,000 coronavirus cases for the past several days. 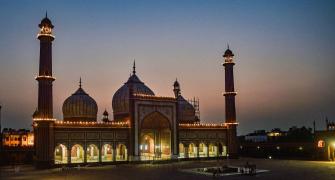 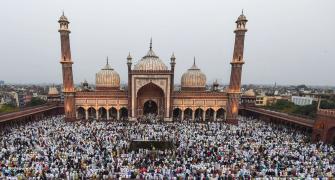 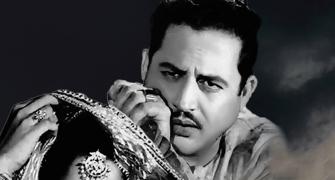 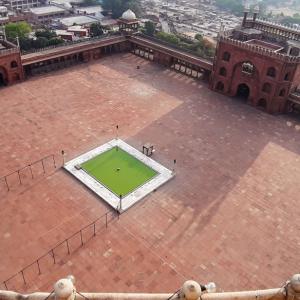