Two persons were killed and scores injured during Jallikattu held on Sunday in the shadow of widespread protests as an ordinance failed to end the six-day-long agitation with Chief Minister O Panneerselvam forced to make a retreat without inaugurating the main event at Alanganallur following demand for a permanent resolution.

A protester, 48-year-old Chandramohan from Jaihindpuram, also died due to dehydration in Madurai city when he was taking part in a demonstration along with students and youths. 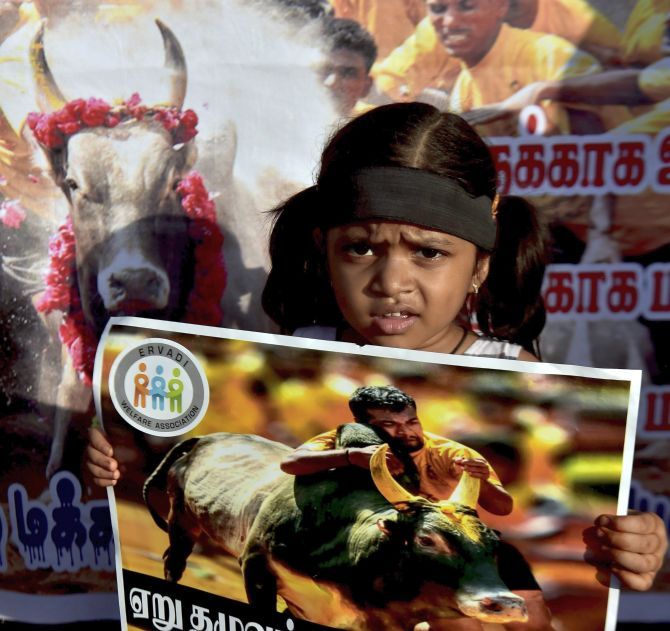 The traditional sport, which was banned by the Supreme Court, was organised in several parts of the state, including Rapoosal in Pudukottai district following promulgation of the ordinance on Saturday. Police said two persons were killed and 28 injured when they were gored by a bull during Jallikattu at Rapoosal in which several bulls were used and many sportsmen participated.

Protesters at Alanganallur in Madurai, however, refused to conduct the sport, steadfast in their demand for a “permanent solution” to ensure unhindered annual conduct of the sport. Panneerselvam, who had announced that he would inaugurate Jallikattu at Alanganallur, had to stay back in a hotel in Madurai following the stir.

Later, he was expected to inaugurate Jallikattu at Natham Kovilpatti in Dindigul. However, there were protests there too, raising the same demand.

Groups of agitators continued their protests at several locations also in the state, raising the same demand. At Marina beach, epicentre of the stir for the last six days, protesters continued to stay put demanding a permanent solution for holding the sport besides a ban on animal rights group PeTA.

Speaking to reporters at Madurai before leaving for Chennai, Panneerselvam said, “The ban on Jallikattu has been removed completely, the sport will be held at Alanganallur, on a date decided by local people.”

He said Jallikattu was held in all parts of Tamil Nadu with the local administration and police taking all stipulated measures. 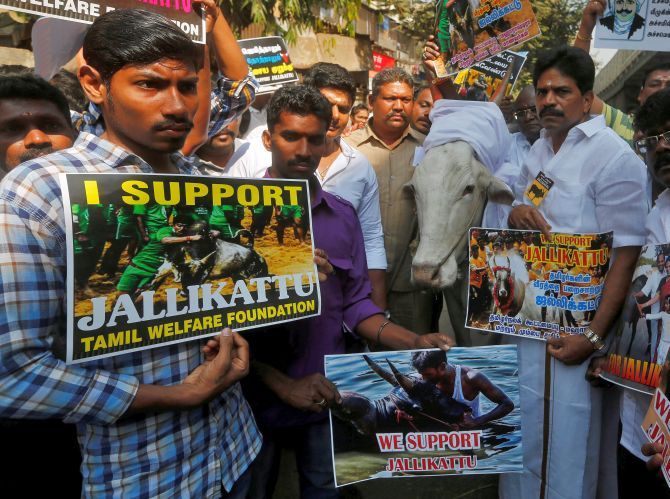 IMAGE: Demonstrators hold signs during a protest to demand a permanent solution to the Jallikattu row. Photograph: Shailesh Andrade/Reuters

With protesters demanding a permanent solution for holding the sport and raising slogans that ordinance was only a temporary measure, Panneerselvam said, “The state’s Jallikattu ordinance route is permanent, robust and sustainable, will be made into a law in the coming assembly session.”

Meanwhile, the Tamil Nadu government has filed a caveat in the Supreme anticipating challenge to its ordinance allowing Jallikattu in the state.

Following unrelenting protests, Dravida Munnetra Kazagham and other Opposition parties urged the Centre to take steps for conducting the sport annually without any hindrance.

“Despite its safeguards, an ordinance that does not enjoy the confidence of people will not yield any practical results. Therefore, the chief minister should stop insisting that the ordinance route is permanent and talk to the protesting youths and explain to them the state government’s efforts for a permanent solution to the matter and pacify them,” he said.

Bharatiya Janata Party leader and Union minister Pon Radhakrishnan urged the protesters to withdraw their agitation across the state, including on the Marina Beach.

He said Prime Minister Narendra Modi had “explained” the legal situation in this regard but fully backed the state’s efforts to hold the bull taming sport. 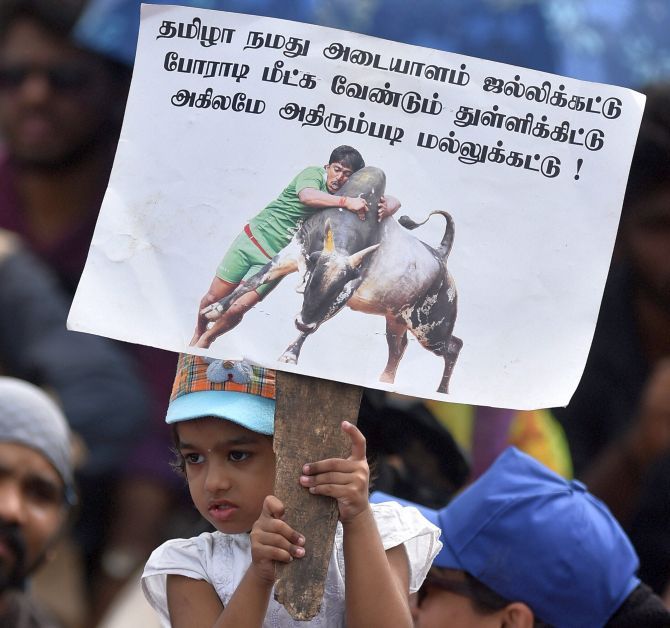 “PeTA go ban bull riding rodeos in Mr Trump’s US. You’re not qualified to tackle our bulls,” he said in a tweet. Haasan, who had on Saturday heaped encomiums on students for the ongoing protests, also said that “people at long last are getting a taste of true democracy”.

“People at long last are getting a taste of true democracy. Gone are the days of leaders. We need humble pathfinders & social reformers,” he said without elaborating.

Suriya and Vijay have supported the protest by the students and lashed out at PeTA for opposing the bull taming sport.

As pro-Jallikattu protests continued, many inter and intra-state trains were cancelled fully or partially as has been the case for the past three days.

At Thanjavur, students held placards and staged protests between the railway station and old bus-stand area. Some students continued their protest for the sixth day in front of the Thanjavur head post office.

Some 500 youths reportedly picketed a passenger train from Mayiladuthurai to Tirunelvelli at Kumbakonam as part of the protest.

‘Manjuvirattu’ (a variety of jallikattu) was held at Sevoor and Iruveli in Ramanathapuram and people participated on a large-scale.