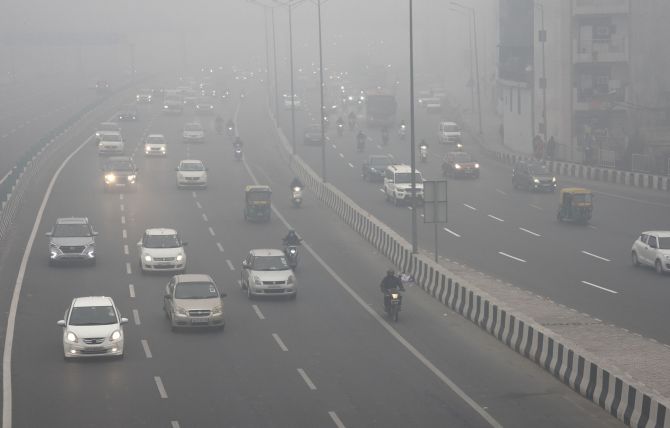 IMAGE: Vehicles ply on a road with their headlights on during a cold and foggy morning in New Delhi, on Monday. Photograph: PTI Photo

While the Dal Lake froze over with Srinagar at a minimum of -6.5 degrees Celsius and Jammu recorded its coldest night in a decade with 2.4 degrees Celsius, Delhi and its surrounding areas were not just cold but foggy and smoggy too with life hit across the region.

A thick fog blanketed the Delhi-NCR, leading to thousands of people being stranded as flights and trains were delayed, diverted or cancelled with visibility dropping to zero metres in some places in the morning.

To make things worse, pollution levels were also high with Delhi's air quality index 'severe' at 448 at 9.38 am.

According to Kuldeep Srivastava, head of the regional weather forecasting centre, the day temperature was almost half of what is considered normal for this day of the year. "Today was the coldest day recorded for the month of December," Srivastava said.

The India Meteorological Department has records of temperatures since 1901.

According to meteorologists, dense fog across the Indo-Gangetic belt, which hinders sun rays from reaching the ground, and the continuous flow of icy northerly winds aggravated cold conditions across the plains of north India that in some places recorded temperatures lower than hill stations.

As a thick fog descended on the region, six people from a joint family, including two minors, were killed when their car skidded off the road and fell into a canal in Uttar Pradesh's Greater Noida late Sunday night. 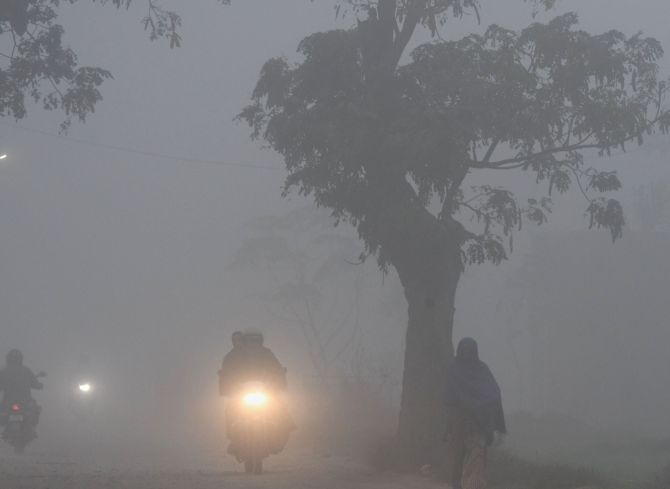 Eleven people travelling in an Ertiga car were on their way to Delhi from Sambhal when the accident occurred, a police spokesperson said on Monday, adding that the accident appeared to have taken place due to low visibility caused by fog.

40 flights were cancelled, 21 diverted and at least 530 delayed until afternoon, an airport official in Delhi said.

Flights operated at the airport under CAT III B conditions, which means the runway visual range (RVR) is between 50 metres and 175 metres, the official said.

'Owing to dense fog in north India our flights have been impacted across India. We will continue to review the situation and provide real time updates on our social platforms,' IndiGo airline said in a statement. 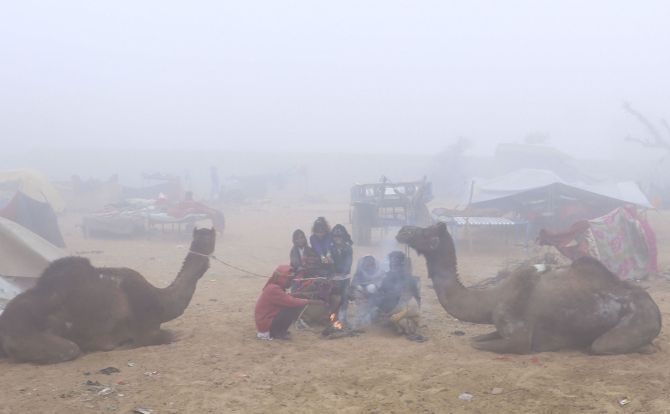 Other airlines, too, reported similar disruptions.

Train travellers were also hit due to the fog, marring year-end holidays for some and urgent travel plans for others.

30 trains were delayed by two to seven-and-a-half hours, according to a Railways official.

The Delhi-Bhubaneswar Rajdhani was delayed by seven-and-a-half hours.

While some people went about their work, many decided to stay at home, peering out of their windows hoping to catch a glimpse of the sun through the blanket of fog.

The many thousands of homeless lit 'garbage' fires, made a beeline for government shelters or huddled in their threadbare blankets to stay warm. 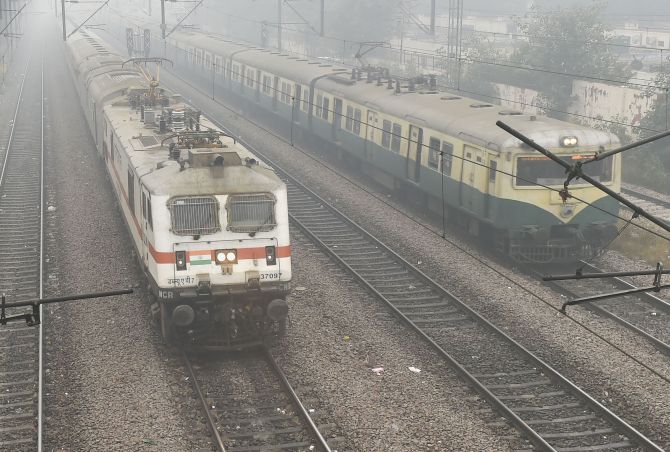 But the day did not relent with sun staying firmly behind the fog.

The minimum temperature settled at 2.6 degrees Celsius at the Safdarjung observatory, four notches below the season's average, and humidity was 100 per cent. 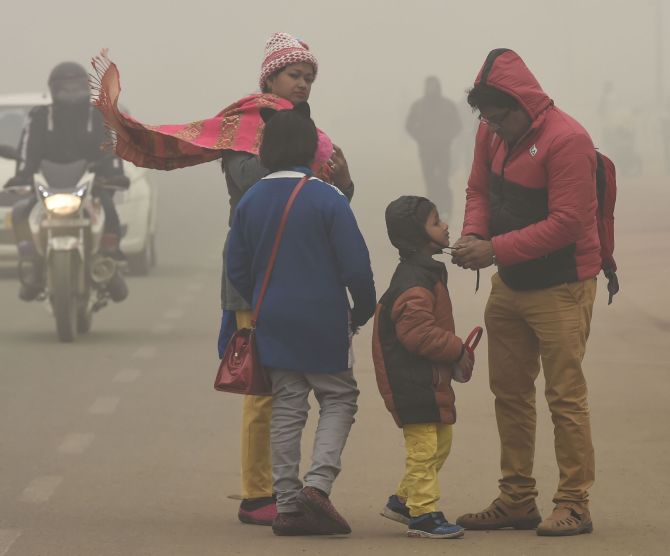 The cold was just as intense elsewhere in north India. In Rajasthan, Sikar district recorded a minimum temperature of -0.5 degree Celsius, the meteorological department said.

In the east, Odisha, too, saw cold wave conditions with the temperature dipping below 10 degrees Celsius in 16 places.