After being closed for over five months due to the COVID-19 pandemic, the Delhi Metro is all set to resume services in three stages from Monday, even as it appealed to people to use the rapid transport only if urgently needed. 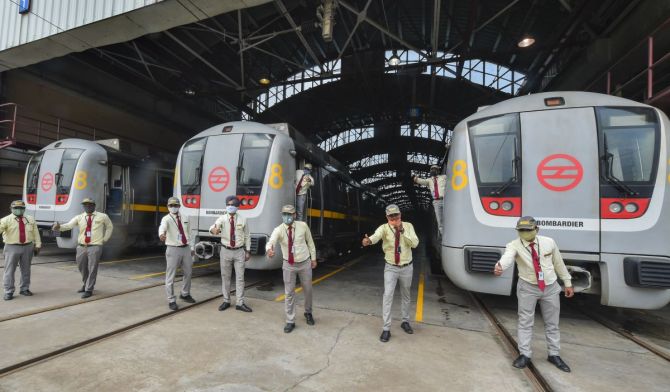 The Delhi Metro Rail Corporation (DMRC) authorities on Sunday reiterated that stations located in containment zones, as per the status on the day of journey, will remain closed.

Officials of the urban transporter had earlier cautioned that 'trains may not stop at some of the stations' if social distancing norms are not adhered to by passengers.

The Delhi Metro services will be resumed in a staggered manner in three stages from September 7-12, with the Yellow Line or Line 2 connecting Samyapur Bali in Delhi to HUDA City Centre in Gurgaon and the Rapid Metro to be the first ones to be made operational on September 7. Trains will operate in batches of four-hour each from 7-11 am in the morning and 4-8 pm in the evening in the first stage, officials said.

Metro services in Delhi-NCR have been closed since March 22 due to the pandemic.

The services will be resumed after a gap of 169 days, the DMRC said in a statement on Sunday. 'Trains will be available with a headway varying from 2'44'' to 5'28'' (at different stretches) with 57 trains performing around 462 trips. The same will be further extended in a graded manner from September 9-12 along with other lines,' the DMRC said.

Over a period of next five days, rest of the lines will also be made operational with all safety measures in place to check the spread of COVID-19 in the metro premises which requires everyone to follow a new normal of social distancing, face mask use and regular hand sanitisation, the officials said.

"However, we appeal to commuters to use metro services only when urgently needed to travel via metro and also avoid using it when they are not feeling healthy.

"Commuters showing COVID-like symptoms will not be allowed to travel and they will be directed to the nearest healthcare facility," a senior official said. Meanwhile, in keeping with the new normal, the Delhi Metro has taken a slew of measures to ensure least physical contact for riders when it resumes services, like an automated thermal screening-cum-sanitiser dispenser and lift calling system driven by a foot pedal.

On Thursday, a preview was held for mediapersons at Rajiv Chowk Metro Station to give an actual feel of the new normal the commuters will experience, from the point of entering station premises to boarding a coach.

A city police official said, wearing of masks inside the premises and inside trains is mandatory, and 'challans will be used if they violate this'.

Use of Aarogya Setu App by commuters will be advisable, it said.

Officials said at all stations, the Central Industrial Security Force staff will be doing 'contactless frisking' and red lines have been drawn at a gap of 1 ft to ensure social distancing during queuing. At the point of entry at 45 stations, automated thermal screening-cum-sanitiser dispensers have been installed, which can read a commuter's body temperature once he or she puts the forehead in front of it, and sanitiser will drop from a dispenser below, once hands are kept below the nozzle, the officials said.

This facility will be available at 17 metro stations, including Rajiv Chowk, Patel Chowk, Central Secretariat and Vishwavidyalaya stations of the Yellow Line, which resume services on September 7.

At other stations, auto-dispenser for sanitiser will be there, but thermal screening will be done manually using a thermal gun, the officials said. Also, at 16 metro stations spanning 50 lifts, including at Kashmere Gate, Rajiv Chowk, IGI Airport, Hauz Khas, and Mandi House, push-button facilities to call a lift has been disabled, and commuters can press a foot pedal to call it, and beyond that the lift will operate automatically, from vertical movement to opening and closing of doors.

Also as per the COVID-19 safety norms, a maximum of three passengers will be allowed in a lift at a time at any station, a senior official said.

Inside the coaches, commuters will have to sit on alternate seats and maintain prescribed distance even while standing.

Stickers have been put up on alternate seats and on platforms to maintain social distancing.

On Sunday, the DMRC also appealed to commuters to "talk less inside trains to prevent the possibility of short-range aerosol transmission". IMAGE: A worker sanitises a metro coach as DMRC gears up to resume its services, at Khyberpass yard in New Delhi, on Sunday. Photograph: Shahbaz Khan/PTI Photo

The DMRC has 10 lines spanning 242 stations, and 264 stations including the Rapid Metro in Gurgaon.

Delhi Metro will resume services two days after the city recorded 2,973 fresh COVID-19 cases, the highest single-day spike in 71 days, as the tally in the city mounted to over 1.88 lakh.

"This is a new normal and an evolving scenario, so we will anyway be assessing the situation once we resume services," a senior official said.

Only smart card users, including QR code users on Airport Express Line, will be allowed to travel, which can be recharged digitally without any human interface, the official said. 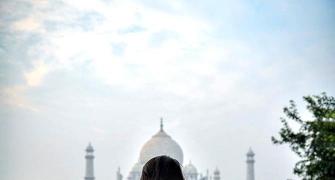