The noxious haze returned to Delhi and its suburbs on Tuesday with raging stubble fires in neighbouring states, fall in the temperature and wind speed pushing the city's air quality in the "severe" zone. 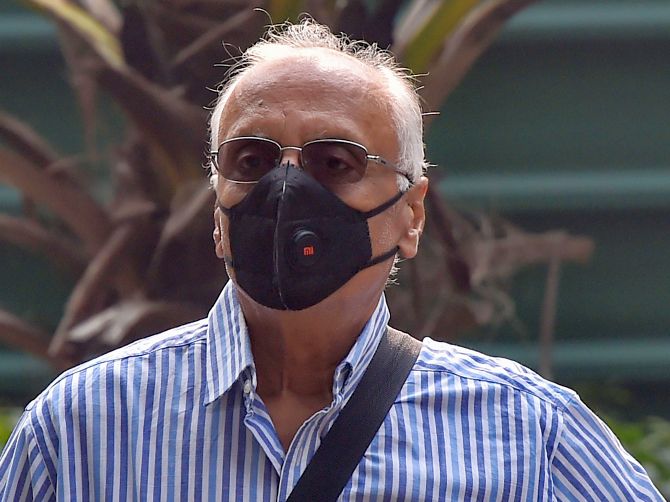 IMAGE: A man wears an anti-pollution mask to protect himself from growing level of air pollution in New Delhi. Photograph: Manvender Vashist/PTI Photo

The government's air quality monitor, System of Air Quality and Weather Forecasting and Research or SAFAR, said pollution levels in Delhi-NCR are expected to enter the "severe plus" or "emergency" category on Wednesday.

Meteorologists said the national capital recorded on Tuesday morning a minimum temperature of 11.7 degrees Celsius, the season's lowest so far. It is two notches below normal for this time of the year.

According to the Central Pollution Control Bureau, Delhi's overall air quality index read 425 at 4 pm and 437 at 9 pm on Tuesday. It was 360 at 4 pm on Monday.

The levels of PM 2.5 -- tiny particulate matter less than 2.5 microns in diameter that can enter deep into the lungs and even the bloodstream -- shot up to 337 micrograms per cubic metre, breaching its emergency threshold of 300, by 9pm in Delhi-NCR.

The spike in pollution came on a day the Delhi government lifted restrictions under its odd-even road rationing scheme in view of the 550th birth anniversary of Sikhism founder Guru Nanak Dev. 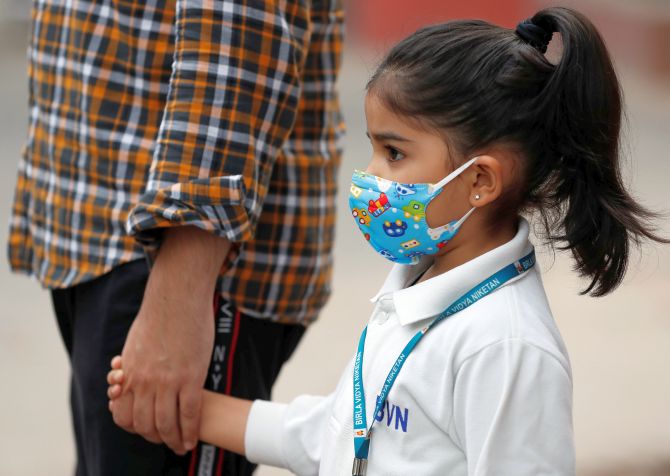 IMAGE: A schoolgirl wearing a protective mask holds her father's hand as she waits for her school bus on a smoggy morning in New Delhi. Photograph: Adnan Abidi/Reuters

Many people also reported violation of the EPCA-imposed ban on firecrackers in winters from several parts of the city.

Experts said the spike in pollution levels can be attributed to a significant decline in wind speed. Incidents of stubble burning in Haryana and Punjab have increased and northwesterly winds have been bringing more farm fire plumes to the Delhi-NCR region, they said.

According to SAFAR, the share of stubble-burning accounted for 25 per cent of Delhi's pollution on Tuesday, up from 18 per cent on Monday.

"No sudden recovery is expected at least for the next two days and the AQI is likely to deteriorate further towards severe-plus category by tomorrow. The condition may slightly improve by November 15," it said in a report.

For around a week after Diwali, a pungent smog lingered over Delhi-NCR as a result of emissions from firecrackers, stubble burning and unfavourable weather.

As the air pollution neared the emergency level on November 1, a Supreme Court-mandated panel declared a public health emergency and the administration ordered closure of schools till November 5. Last week, the apex court had pulled up the Centre and state governments for their inability to curb stubble-burning in Punjab and Haryana and bring air pollution in Delhi under control. It had asked the governments if they feel ashamed that people are no longer safe even in their houses.

The top court had also ordered that all farmers be given a Rs 100 per quintal incentive to prevent them from setting their fields on fire in preparation for the next crop, and provide them free machines to get rid of the agriculture residue.

The period between October 15 and November 15 is considered critical as a maximum number of stubble-burning incidents take place in this span in Punjab and adjoining states, which is one of the main reasons for the alarming spike in pollution in Delhi-NCR.

State governments are providing 50 to 80 per cent subsidy to farmers and cooperative societies to buy modern farm equipment for in-situ management of paddy straw, but farmers say use of machines increases the input cost manifold.

According to an affidavit filed by the Centre in the Supreme Court, Haryana, Punjab and Uttar Pradesh distributed around 63,000 machines to farmers during 2018-19. In 2019-20, as many as 46,000 machines have been distributed.

The Delhi environment minister had on Monday said, "There are around 27 lakh farmers in Punjab alone. If the same speed continues, it will take another 60 years for the machines to reach every farmer...It seems stubble burning will continue at the same pace next year too."