The Delhi government on Friday decided to shut all schools till November 5 after a Supreme Court-mandated panel declared a public health emergency in Delhi-NCR in the wake of spike in pollution level. 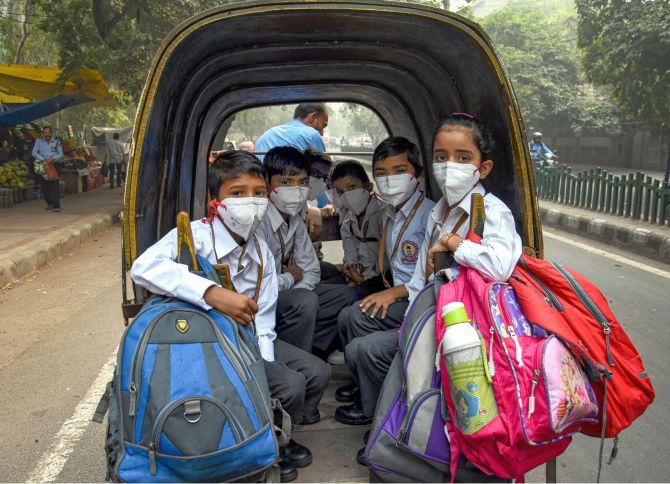 As the air quality deteriorated and the pollution level in the region entered the "severe plus" category", the Environment Pollution (Prevention and Control) Authority banned construction activity till November 5 and bursting of crackers during the winter season.

The Delhi government and municipal authorities also declared holidays in their schools till November 5.

"In the wake of rising level of pollution caused by stubble burning, the Delhi government has decided to shut all schools till November 5," Delhi Chief Minister Arvind Kejriwal tweeted in Hindi.

Kejriwal also met EPCA Chairman Bhure Lal and assured him of all cooperation in implementing the Graded Response Action Plan).

"I had an excellent meeting wid Sh Bhure Lal ji, EPCA chief. I sought guidance from him and reiterated the commitment of our govt in dealing wid pollution. I also assured him all cooperation in implementing GRAP and other measures," Kejriwal said in another tweet. 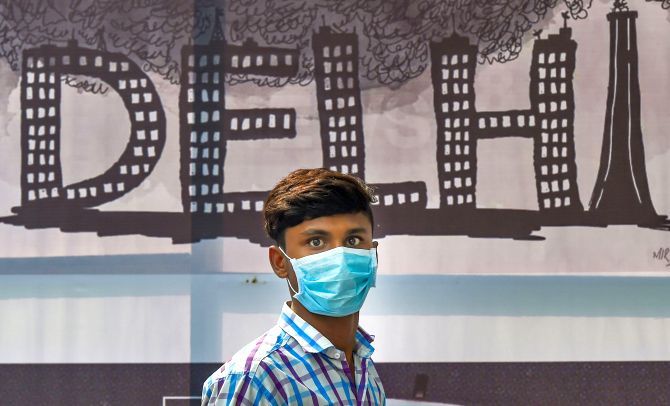 The share of stubble burning in Delhi's pollution stood at 46 per cent on Friday, the highest so far, according to the Ministry of Earth Sciences' air quality monitor SAFAR.

Standing Committee Chairman of NDMC Jai Prakash said in view of the increasing air pollution in Delhi it has decided to keep all schools closed till Tuesday. 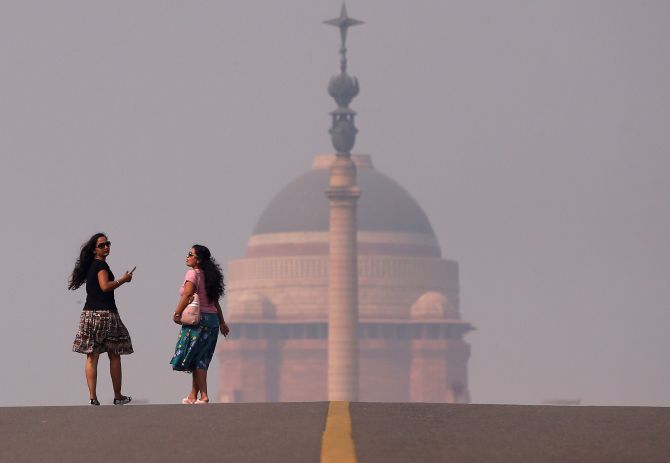 "Severe level of pollution is adversely affecting the health of children. In order to reduce the ill effects of pollution especially on school going children, it has been decided to close schools till November 5. The situation later will be reviewed and a decision will be then taken accordingly," she said.

The South Delhi Municipal Corporation (SDMC) also said the 581 schools under the civic body would be shut till November 5 due to "prevailing poor air quality".

The blanket of haze over Delhi thickened on Friday morning with the national capital's pollution levels increasing overnight. 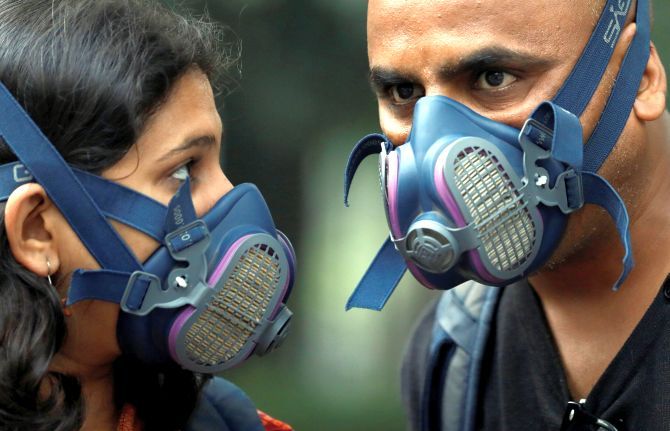 Many people moved around with masks and others stayed resolutely indoors as smog enveloped the city.

The hazardous pollution levels forced a number of people to miss morning walks and other activities. 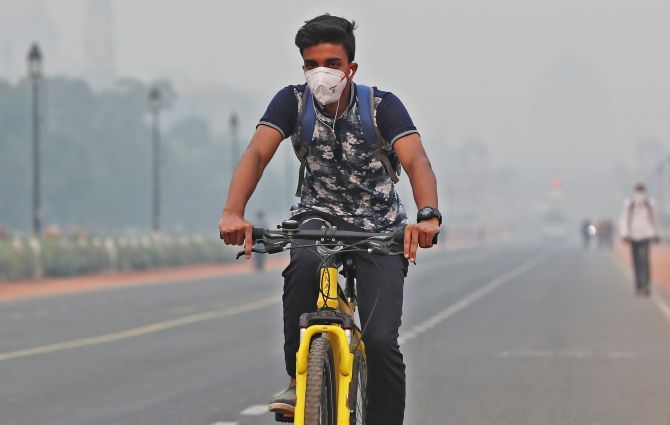 Meanwhile, in a letter to chief secretaries of Delhi, Haryana, Rajasthan and Uttar Pradesh, Lal said, "The air quality in Delhi and NCR deteriorated further last night and is now at the severe plus level. We have to take this as a public heath emergency as it will have adverse health impacts on all, particularly our children."

In an earlier tweet, Kejriwal said Delhi has turned into a "gas chamber" due to smoke arising out of crop burning in Punjab and Haryana.

He said the Manohar Lal Khattar government and the Amarinder Singh government were forcing their farmers to indulge in stubble burning causing spike in pollution in the national capital. 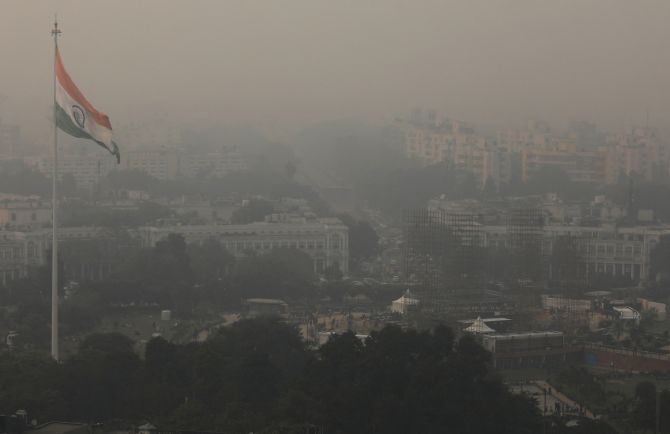 Earlier in the day, Kejriwal distributed masks to schoolchildren as part of the government's initiative to protect them from pollution and also explained children about stubble burning.

He told students that smoke emanating from stubble burning in Punjab and Haryana was causing air pollution here and asked them to write letters to chief ministers of the two states urging them to control it.

As air pollution reached alarming levels, hospitals reported a surge in the number of patients suffering from respiratory and breathing complications. 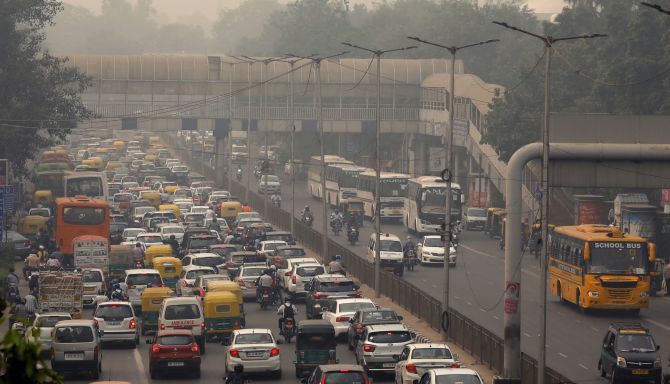 "Patients are coming with complaints of watery eyes, cough, breathing difficulty, allergy, exacerbation of asthma and and chronic obstructive pulmonary diseases (COPD)," AIIMS Director Randeep Guleria said, adding that children and those above the age of 60 are the worst affected.

Besides affecting lungs, high levels of pollutants in the atmosphere cause inflammation in blood vessels and may lead to hardening of arteries which can act as a trigger for stroke or heart attack in persons already at risk of the disease, Guleria explained. 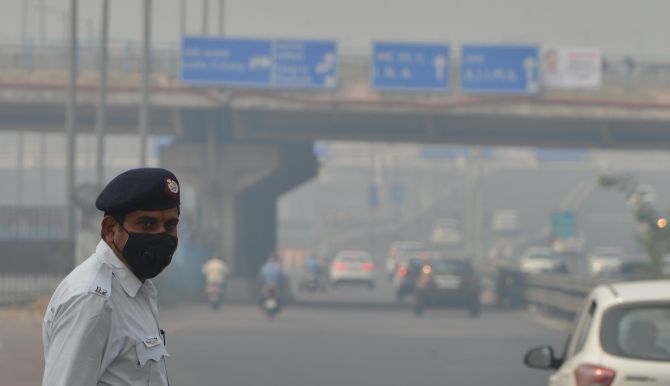 Environment Minister Prakash Javadekar on Friday attacked Chief Minister Arvind Kejriwal for "politicising" the issue of air pollution and indulging in a blame game as the air quality in Delhi-NCR deteriorated further.

At an event to launch e-vehicles to tackle pollution in the city, Javadekar also slammed the Aam Aadmi Party government for not releasing funds for the construction of the Eastern Peripheral Expressway aimed at de-congesting traffic in the national capital.

Javadekar acquired electric vehicles for himself and his ministry saying it was "our duty to relieve the people" of contaminated air. "The Delhi chief minister is politicising the issue of air pollution and is indulging in a blame game. I will not stoop to their level," Javadekar said. 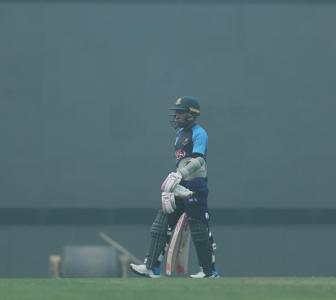 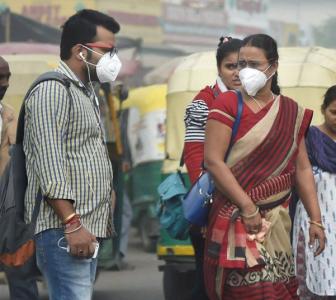 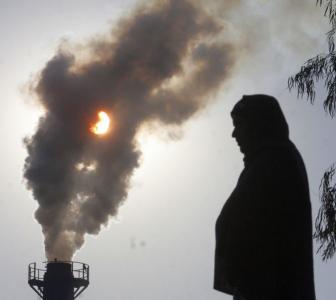