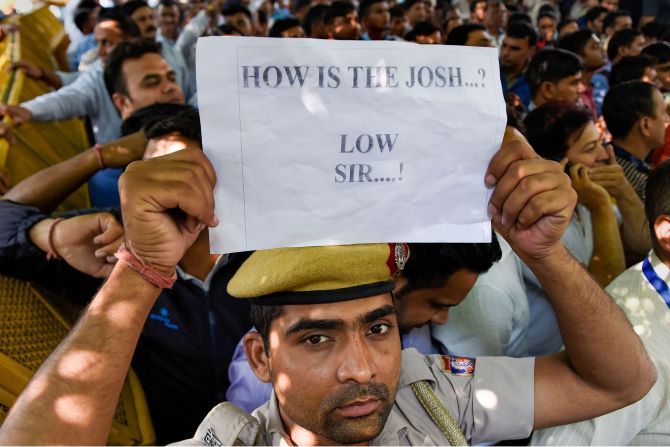 In unprecedented protests by Delhi police, thousands of its personnel on Tuesday laid siege outside the Police Headquarters for 11 hours and staged a virtual revolt sparked by two attacks on their colleagues before calling of their stir following multiple appeals including from their chief.

The protests in which families of the personnel also took to streets were withdrawn in the night after an assurance by senior officers that their grievances will be addressed. 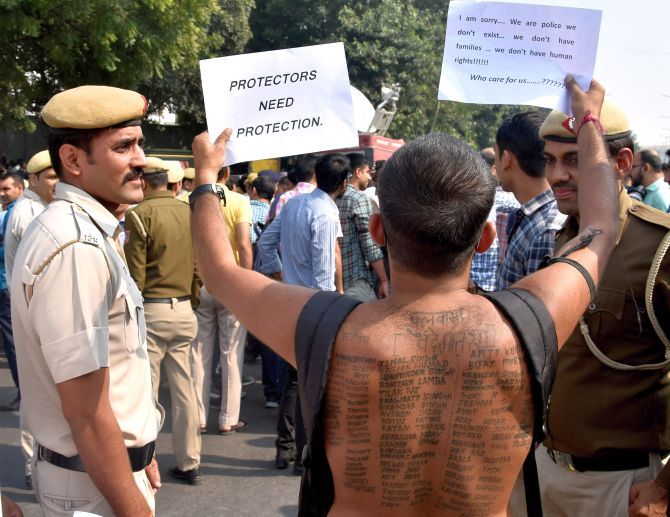 Addressing the protesters, Special Commissioner of Police (Crime) Satish Golcha urged them to end their stir and resume duty, while assuring them that a review petition will be filed against the Delhi high court order in connection with a clash between cops and lawyers at the Tis Hazari Courts Complex.

Delhi Police has a strength of over 80,000 personnel.

Ordering a judicial inquiry by one of its retired judges into the clash, the high court at a special sitting on November 3 suspended a police official and transferred two senior police officials during pendency of the investigations. 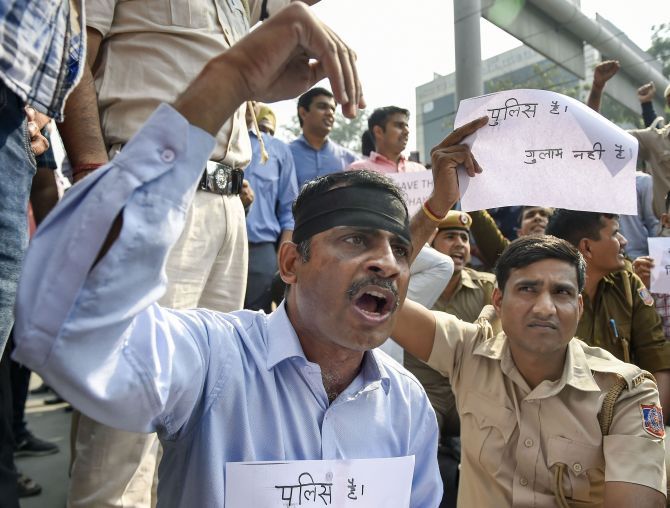 Golcha said the injured policemen will get an ex gratia of at least Rs 25,000.

The protests were triggered by the two attacks on their colleagues, one on Monday outside Saket District Court and another on Saturday at the Tis Hazari Courts Complex after a parking dispute between an on-duty policeman and a lawyer which led to at least 20 security personnel and several advocates being injured.

Two first information reports were registered against unidentified persons, who were seen in a video hitting a uniformed policeman on a motorcycle with his elbow and slapping him outside the Saket court. 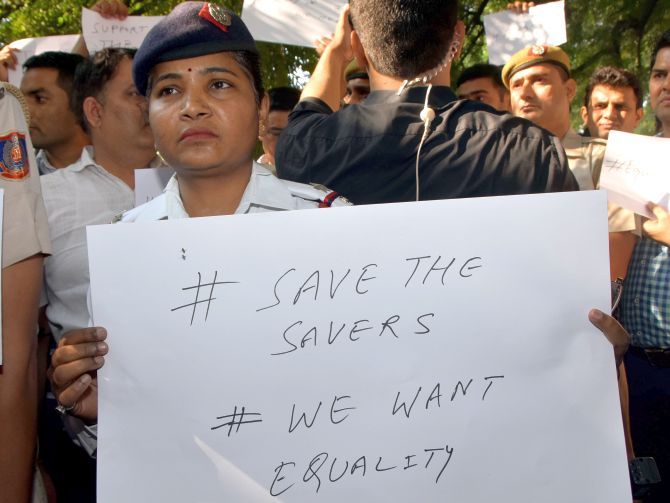 Shouting slogans like 'We Want Justice' and 'Go Back, Go Back' as their senior officers appealed for calm, the surging crowd of protesters, some in uniform and some in civvies, gathered outside the Police Headquarters in the Income Tax Office(ITO) area in the morning itself.

In the evening, one of the protestors read out the demands including revoking the licenses of the lawyers who assaulted the policemen and quashing of FIRs against the cops.

The family members gathered to protest at the India Gate, about 2 km away from the police headquarters, in an effort to spread the agitation.

"Delhi Police officers are on duty round the clock so that the people can celebrate every festival without fear. But while making those sacrifices, they get thrashed on the roads. Don't we have feelings or any rights?" said Munesh Dahiya, the wife of a police officer.

As the protests escalated, the Centre was understood to be unhappy over the manner in which it was held in violation of service conduct even though, according to an official, it is sympathetic to their grievances.

The Bar Council of India asked various bar bodies to identify lawyers 'indulging in hooliganism' and requested advocates to end their protests, which are 'bringing bad name to the institution'. 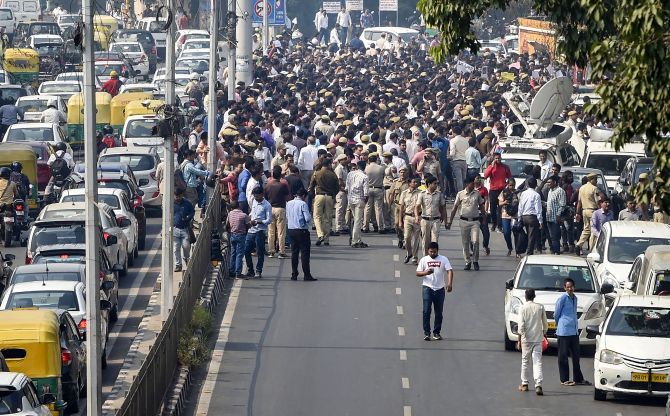 The Centre too rushed to the Delhi high court urging it that its order for no coercive action against advocates, passed on Sunday following the lawyers-police clash at Tis Hazari court, should not be applicable for subsequent incidents.

The protestors did not relent despite several appeals by top police officers all through the day. 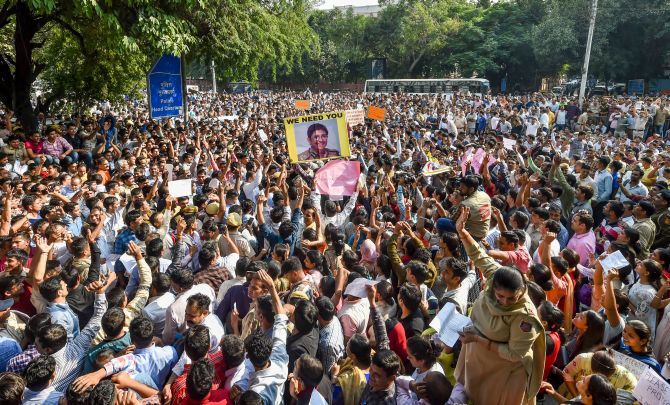 IMAGE: Recalling similar clashes between lawyers and policemen back in 1988, many in the crowd were carrying a big poster of Kiran Bedi, chanting slogans like 'Kiran Bedi sherni hamari' and 'Our Commissioner should be like Kiran Bedi'. Photograph: Manvender Vashist/PTI Photo

Police Commissioner Amulya Patnaik had also made an unsuccessful appeal to the protestors to end their stir.

"We have to behave like a disciplined force. The government and the people expect us to uphold the law, it is our big responsibility. I urge you to resume duty," Patnaik said, as he was jeered by the police personnel amid shouting of slogans.

"The last few days have been testing for us. A judicial enquiry is underway and I request you to have faith in the process," he said.

'In the wake of the recent unfortunate incident, it is imperative to restore the trust between the two and also to ensure that justice is done impartially in the entire matter,' said a statement quoting Baijal.

Holding up placards with slogans such as 'We are human in police uniforms', 'We are not punching bags' and 'Protectors Need Protection', the policemen and policewomen urged their seniors to stand with them to save the honour of the uniform.

"No police officer nor any politician went to the hospital to check on our injured colleagues. It is disappointing and demoralising for us," said a woman constable on the condition of anonymity. 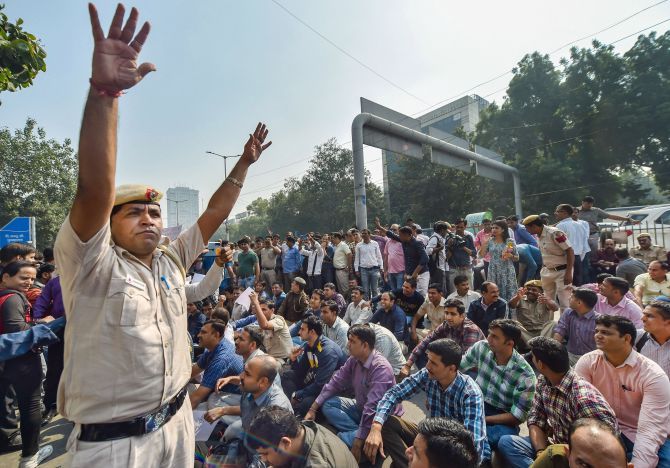 IMAGE: The cops urged their seniors to stand with them to save the honour of the uniform. Photograph: Manvender Vashist/PTI Photo

Recalling similar clashes between lawyers and policemen way back in 1988, many in the crowd recalled former IPS officer Kiran Bedi who was then at the heart of the controversy.

Some were carrying a big poster of Kiran Bedi and now Lieutenant Governor of Puducherry, chanting slogans like 'Kiran Bedi sherni hamari' and 'Our Commissioner should be like Kiran Bedi'. 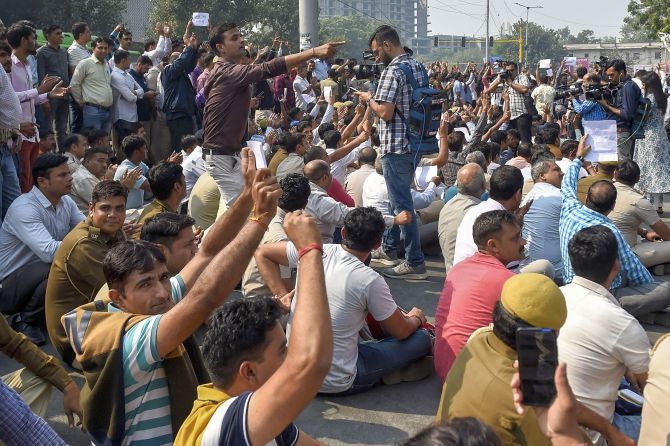 IMAGE: The IPS association had also said that police personnel all around the country stands with those who were assaulted and humiliated. Photograph: Atul Yadav/PTI Photo

Leaders of the amorphous protest movement urged their colleagues in other states to join them.

"Chief Minister Arvind Kejriwal went to meet injured lawyers but did not meet our policemen who were also injured in the incident. Isn't it unfair to us," added another. IMAGE: They were agitating against the attack on a policeman outside the Saket court on Monday. Photograph: Manvender Vashist/PTI Photo

The incidents drew sharp criticism from senior police officials who took to Twitter to register their discontent.

Police on the streets a 'new low', says Congress

The Congress on Tuesday said the police protesting on the roads in the national capital is a "new low" for India since independence.

Congress chief spokesperson Randeep Singh Surjewala asked whether this is Bharatiya Janata Party's 'New India' and wondered where the ruling party is taking the country to.

"A new low in 72 years - Police on protest in 'National Capital of Delhi'.

"Is this BJP's 'New India'? Where will BJP take the country? Where is India's HM, Sh Amit Shah," he posted on Twitter.

The party's spokesman RPN Singh said, "This is unprecedented. If law enforcement agencies are on the streets, what will happen to the common man?"

He alleged that such things take place whenever the BJP is in power.

Anjali Pillay and Nitin Rawat in New Delhi
© Copyright 2021 PTI. All rights reserved. Republication or redistribution of PTI content, including by framing or similar means, is expressly prohibited without the prior written consent.