Delegation of EU MPs in Kashmir to assess ground situation

A delegation of 23 European Union MPs, on a two-day visit to assess the situation in Jammu and Kashmir, arrived in Srinagar on Tuesday to a complete shutdown and clashes between people and security forces in several parts of the city and the Valley. A convoy of security vehicles escorted the MPs, who were travelling in bullet-proof vehicles, from the airport to their hotel where a traditional Kashmiri welcome awaited them.

Jammu and Kashmir Chief Secretary B V R Subrahmanyam and police chief Dilbag Singh briefed the members of the European Parliament, the first high-level foreign visitors to Kashmir after the August 5 decision of the Centre to revoke the state's special status and bifurcate it into two union territories.

The team also interacted with members of the public, including the newly-elected panchayat members and councillors, at a five-star hotel. As the winter chill settled over the city, there was some boating in the famed waters of the Dal Lake too.

The MPs were boating near the Centaur Hotel, where more than 30 politicians and activists have been under detention since August 5. IMAGE: The MPs were boating near the Centaur Hotel, where more than 30 politicians and activists have been under detention since August 5. Photograph: S Irfan/PTI Photo

There was a complete shutdown in the city and at least four people were injured in numerous clashes between protesters and security forces in various parts of the Valley and in Srinagar, officials said.

People put up blockades in at least five different places in Srinagar, including Downtown Srinagar and 90 Feet Road. Shops and business establishments were closed and transport off the roads due to the clashes. There were also some incidents of stone pelting.

Vendors, who had been setting up their stall over the past weeks, also did not turn up on Tuesday, officials said. 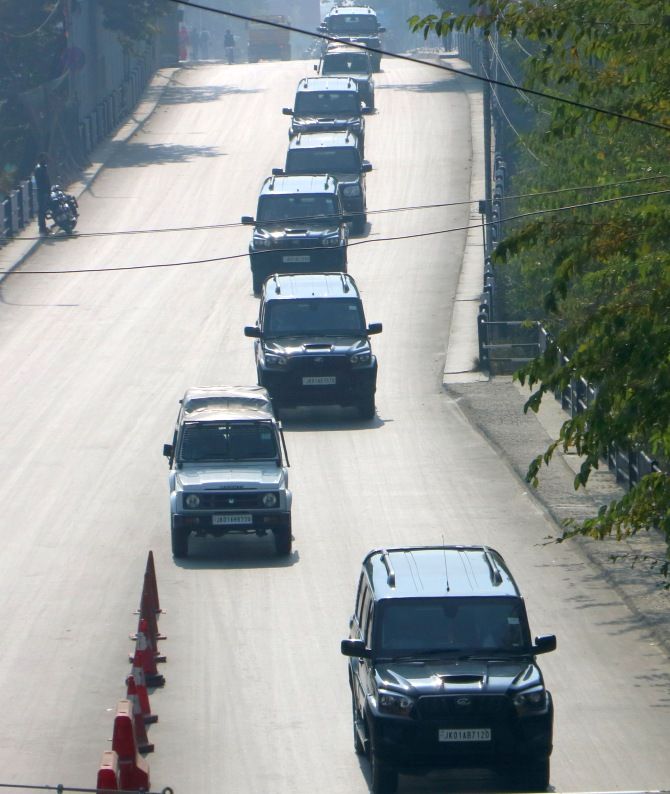 However, board examinations for Class 10 were held on schedule with worried parents waiting outside exam halls for their children.

The team originally comprised 27 parliamentarians, many from extreme right or right wing parties, but four did not travel to Kashmir and have reportedly returned to their respective countries, officials said without divulging any reason.

On Monday, the members of the European Parliament met Prime Minister Narendra Modi in Delhi. While welcoming the MPs to India, he "expressed the hope that they have a fruitful visit to various parts of the country, including to Jammu and Kashmir". "Their visit to Jammu and Kashmir should give the delegation a better understanding of the cultural and religious diversity of the region of Jammu, Kashmir and Ladakh, apart from giving them a clear view of the development and government priorities of the region," a PMO statement said. 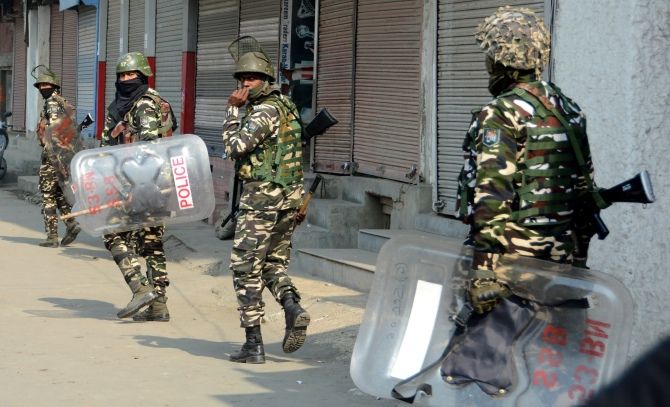 IMAGE: Heavy security was seen in Kashmir after clashes broke out on the day that the delegation of EU MPs arrived. Photograph: Umar Ganie/Rediff.com

A few weeks ago, a senator of the United States was denied permission to visit Kashmir.

A joint delegation of opposition MPs, including Congress leader Rahul Gandhi, undertaking a visit to Kashmir about two months ago, was not allowed to go beyond the Srinagar airport after their arrival from Delhi and were sent back to the national capital. 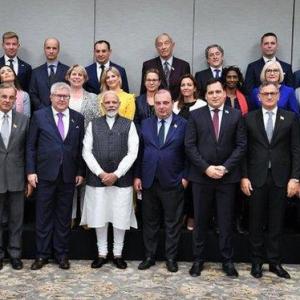 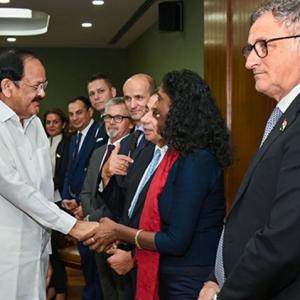