Sri Lankan government on Wednesday admitted that 'major' intelligence lapses led to the horrific Easter Sunday blasts and asked two top security officials to resign, even as the death toll in the coordinated attacks rose to 359 amidst a nationwide manhunt to nab the perpetrators. 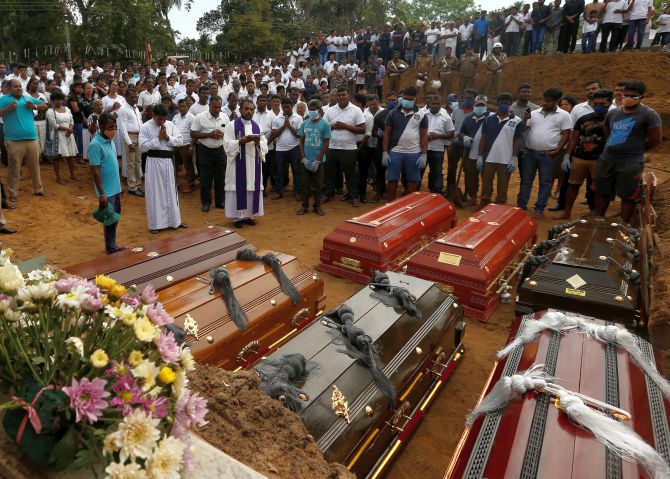 President Maithripala Sirisena has asked Defence Secretary Hemasiri Fernando and Inspector General of Police Pujith Jayasundara to quit after their failure to prevent the blasts despite having prior intelligence.

Sirisena on Tuesday night pledged that he will make changes in top positions in the security establishment within the next 24 hours, saying the people were questioning why action had not been taken by the top security officials despite the availability of intelligence support from a friendly neighbouring country.

Meanwhile, several people succumbed to their injuries sustained in the blasts, taking the death toll to 359.

He said that the search operations were being carried out and so far 60 people, all Sri Lankan nationals, have been arrested in connection with the attacks.

Guansekera said that there were nine suicide bombers including a woman involved in the bombings.

"Eight of them have been identified," he added. IMAGE: A woman who lost her husband and two children in the bombing at St Sebastian's Church mourns during the mass burial. Photograph: Thomas Peter/ Reuters

Top officials have acknowledged that Sri Lanka received intelligence about possible terror strikes ahead of the attacks, but both President Sirisena and Prime Minister Ranil Wickremesinghe have said that they did not receive the information.

State Minister of Defence Ruwan Wijewardene acknowledged that there had been 'major' lapses in the security arrangements.

"We (the government) have to take the responsibility," he said.

"Some of them (the attackers), in earlier incidents, had been taken into custody (after) small skirmishes, but nothing of this magnitude," Wijewardene told reporters in Colombo.

Intelligence suggested that the attackers were motivated by the Christchurch shootings, the minister said.

"One of the suicide bombers studied overseas. Most of them are well-educated, and come from maybe middle-class or upper-middle-class. So they are financially quite independent and their families are quite stable financially.

"We believe that one of the suicide bombers studied in the UK and maybe later on did his post-graduate in Australia, before coming back to settle in Sri Lanka," he said. Wijewardena said the multiple bomb attacks were carried out by a splinter group of the NTJ. The group had differences and the final attack was carried out by a group that left the main NTJ, he added.

Local and international media reported that India and the United States provided specific warnings about terror attacks to Sri Lanka, ahead of the Easter Sunday bombings.

However, US Ambassador to Sri Lanka Alaina Teplitz said, "We had no prior knowledge of these attacks."

Meanwhile, police said that as many as 34 foreign nationals who lost their lives have been identified.

Of them, 10 are from India, three from Denmark, one each from Japan, the Netherlands, Portugal, Bangladesh, Spain, two each from China, Saudi Arabia, Turkey, six from the United Kingdom, two holding the US and the UK nationalities and two holding Australian and Sri Lankan nationalities, officials said.

The mortal remains of nine out of 10 Indians have been sent to India, according to the Indian High Commission in Colombo.

The police on Wednesday carried out a controlled explosion of a motorcycle parked under suspicious circumstances near a cinema hall in South Colombo.

Giving information on the suicide bombers, the police said that the attacks at the Cinnamon Grand and Shangri La Hotels had been carried out by two brothers. 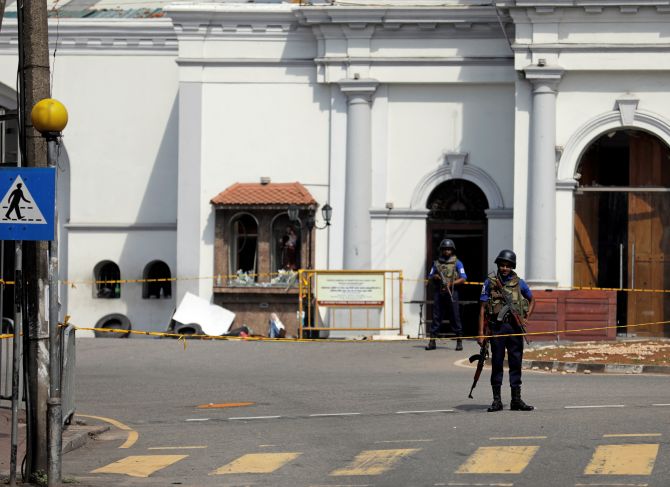 IMAGE: Security personnel stand guard near St Anthony's Shrine in Colombo, one of the targets of terrorists. Photograph: Dinuka Liyanawatte/Reuters

The Cinnamon Grand Hotel bomber had booked himself into the hotel on the previous night. CCTV footages have shown his breakfast table where he was seen consuming pieces of fruit and taking a walk around the restaurant before exploding himself.

Their younger brother has also been nabbed by the police. The house search had led to the discovery of extremist literature, a computer hard disk and SIM cards, thought to have been used to coordinate the blasts.

The police has already arrested the accomplices of the bomber of the lodging house near the National Zoo at the Colombo suburb of Dehiwela.

The taxi driver who had taken him to the lodge was also arrested, the police said.

The police suspected the bomber may have been targeting the nearby St Mary's Church where a large gathering was present at the Easter mass.

The Education Ministry said the reopening of schools had been put off till April 29.

A state of emergency remains in effect to prevent further attacks.

The emergency powers allow the security forces to crackdown in law and order breaches by sudden searches of property, arrests and detention of people indefinitely.