As Gujarat and Diu are braving to face "very severe" cyclone Vayu, Home Minister Amit Shah on Wednesday said authorities have evacuated about 3.1 lakh people living in the low-lying areas and the National Disaster Management Relief Force has pre-positioned 52 teams for rescue and relief operations. 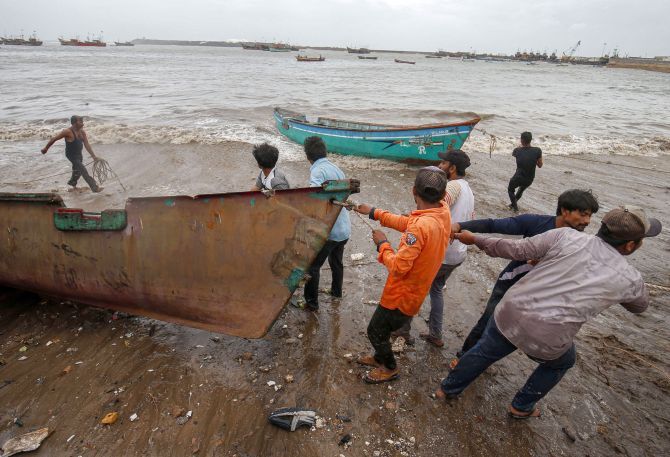 Shah also said the Indian Coast Guard, the Navy, the Army and the Air Force units have also been put on standby while aircraft and helicopters are carrying out aerial surveillance.

"Gujarat has evacuated about 3 lakh people and Diu has evacuated over 10,000 people from low-lying areas to safer places...(the) MHA is in continuous touch with state govts/UT and central agencies. The NDRF has pre-positioned 52 teams equipped with boats, tree-cutters, telecom equipments etc," Shah tweeted.

The home minister said cyclone Vayu is expected to cross the Gujarat coast between Porbandar and Union Territory Diu and he "prays for the safety of the people".

An alert has been sounded in 10 districts of Gujarat as cyclone Vayu has turned "very severe" and its impact is expected to remain strong for 24 hours even after its landfall Thursday, officials said.

Normally, a cyclone becomes weak after its landfall. 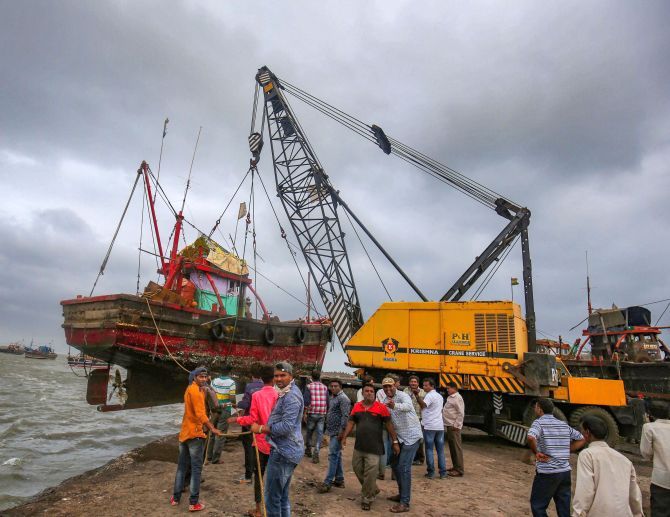 As many as 52 teams of the NDRF, comprising around 45 rescuers each, have been moved to the state, while 10 columns of the Indian Army have been kept on standby.

"In addition, six teams each are being airlifted from Patna airport and INS Rajali to Gujarat. This will raise the number to 52 (NDRF) teams in Gujarat (47 teams) and Diu (5 teams) for assisting the local administration in rescue and relief work," it said.

Warships and aircraft of the Indian Navy have been kept on standby as well. 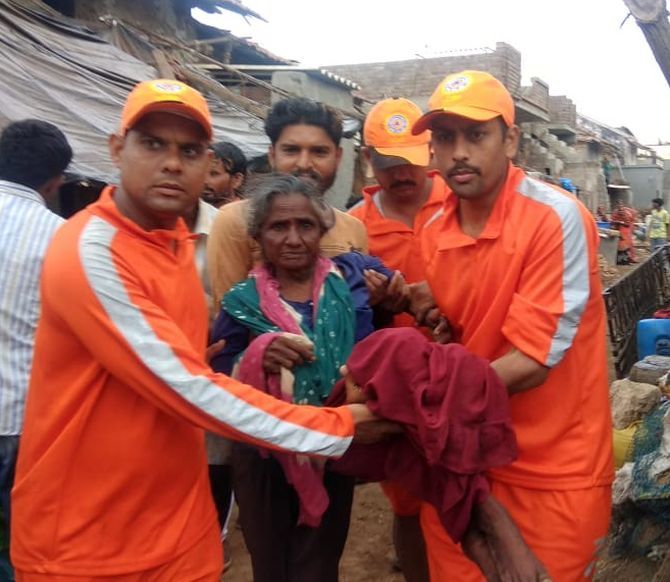 The IAF has also positioned the medium lift and light utility helicopters at nodal points in the state to undertake the disaster relief operations.

A highly mobile deployable radar has been placed at a high state of readiness at Gandhinagar to channelise helicopter operations towards relief and evacuation and establish communication with control centers, the IAF said.

"Praying for the safety and wellbeing of all those affected by Cyclone Vayu. The government and local agencies are providing real-time information, which I urge those in affected areas to closely follow," Modi said in a tweet. 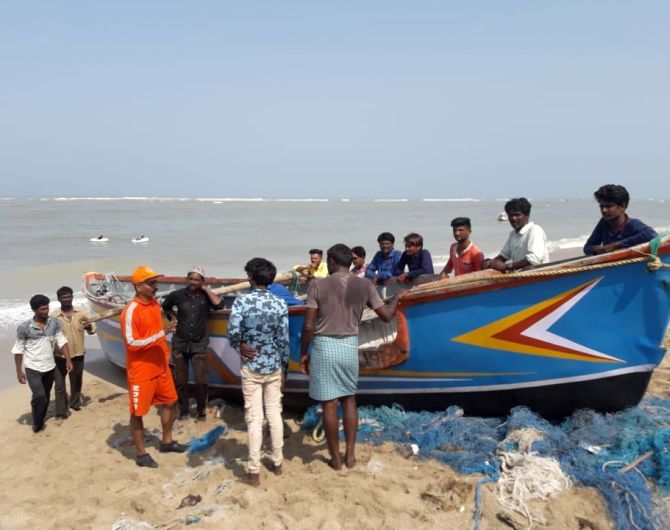 The Indian Coast Guard has also deployed ships and aircraft to enable search and rescue post the landfall of the cyclonic storm.

The ICG has dispersed its ships and aircraft at various places to enable search and rescue post the landfall.

"We have positioned our aircraft at Daman and Ahmadabad and the ships at Mundra, Okha and Jakhau. A ship from the western region has also been diverted to North West region for the post-cyclone landfall for providing search and rescue requirement and other emergency developing at sea off the Saurashtra and Kutch region," it said. 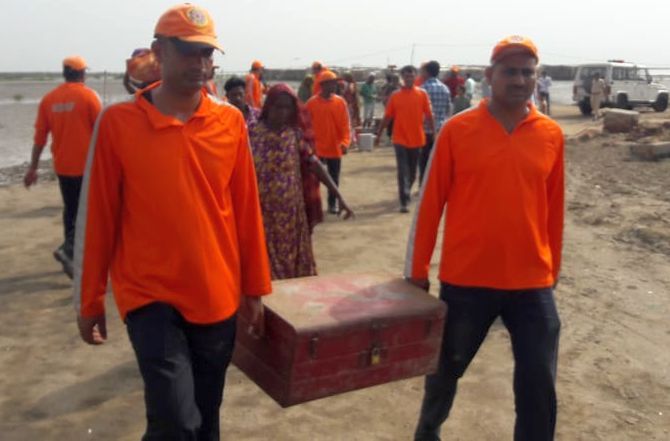 The ships and aircraft have been directed to be prepared for any oil spill response by merchant ships in the region," the ICG said.

A general alert has been sounded across 10 district in Gujarat as wind speeds are likely to touch 170 km per hour, a Home Ministry official said.

Residents of some of the Gujarat districts have been asked to move out to safer places or cyclone shelter centres.

Operations at ports and airports in these regions have been suspended as precautionary measure, officials said.

Meanwhile, Home Secretary Rajiv Gauba on Wednesday chaired a meeting of the National Crisis Management Committee where preparation for relief and rescue operations were discussed threadbare.

The NCMC meeting took stock of the precautionary measures taken by the Gujarat government and the Diu Union Territory administration with a view to ensure that no human life is lost, damage to vital infrastructure is minimised and to ensure early recovery of all essential services post-cyclone landfall.

Diving and rescue teams and relief material have been kept on standby for rendering assistance to civil authorities, as required, another official said. 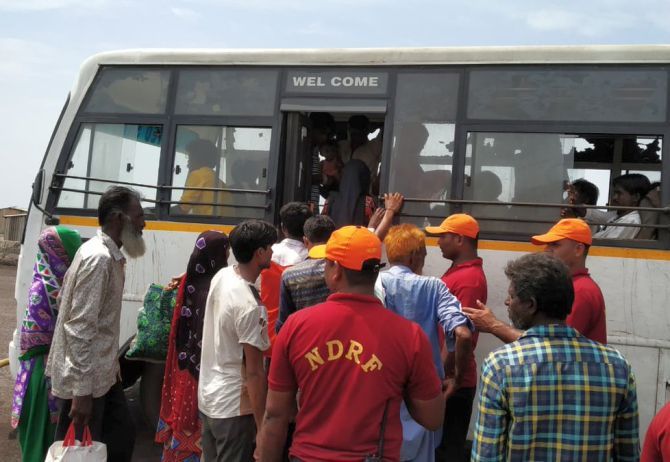 As a precautionary measure, holiday has been declared in schools, colleges and 'anganwadis' (government-run women and child care centres) on June 12 and June 13 in these 10 districts.

The cyclone is likely to damage thatched houses, blow away rooftops and metal sheets, disrupt power and communication lines and cause major damage to roads and crops, the weather department said.

Medical teams and facilities at the Indian Naval hospital in Mumbai are on standby to handle medical emergencies.

Both the administrations have also been advised for timely evacuation of people from the low-lying coastal and vulnerable areas. 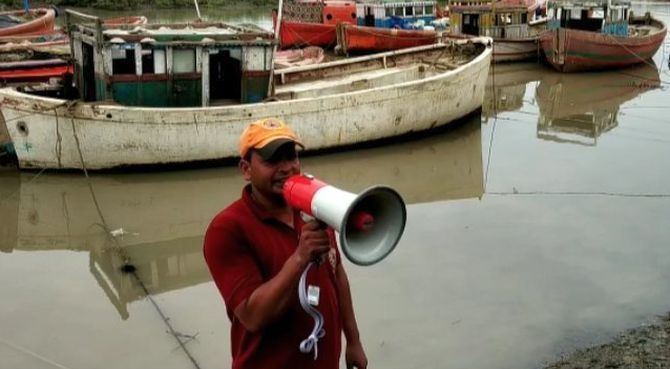 The Gujarat and Diu administration are evacuating about three lakh people from the identified vulnerable areas and they are being shifted to around 700 cyclone and relief shelters.

As a precautionary measure, the Railways announced that all the trains for this region have been either short terminated or cancelled for two days, starting from 6 pm Wednesday.

As all airports in Kutch and Saurashtra region have been asked to shut their operations, flights to these destinations from Ahmedabad Airport stand cancelled for Thursday, an official said. 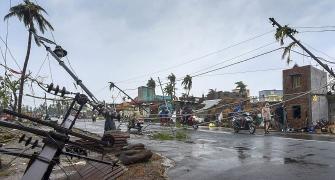 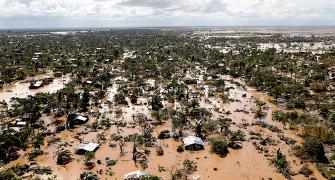 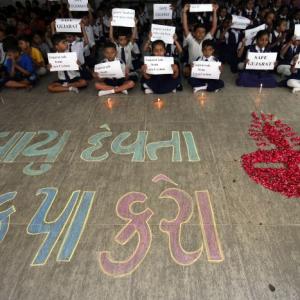 High alert in Gujarat as cyclonic storm Vayu closes in